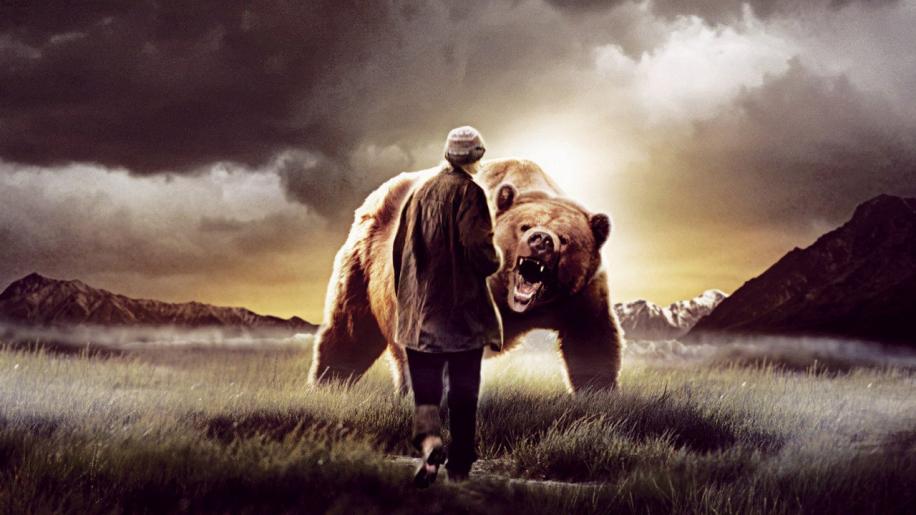 Made by the eccentric Warner Herzog, Grizzly Man is one of the most compelling documentaries I have ever seen. Through interviews and, primarily, acres of video-footage, he chronicles the last few years in the increasingly bizarre life of naturalist and filmmaker Timothy Treadwell, the semi-legendary eco-warrior and champion of the grizzly bears of Alaska. A celebrity in his own right - think Steve Irwin with even less regard for his own personal safety - Treadwell spent thirteen summers living dangerously close to his adopted bear family, gradually but surely jettisoning his ties with civilisation and charting a path of self-destruction that is now, via his own words and over one hundred hours of astonishing film, a poignant, surreal and deeply disturbing odyssey with fate. Killed alongside his wildlife-fearing girlfriend, Amie Hugenard on her one and only forage into the wilds, by the very bears he so loved, his tale is a cautionary one. And, at the same time, a perversely uplifting one.

“Treadwell reached out, seeking a primordial encounter. But, in doing so, he crossed an invisible borderline.”

Opening with an unbelievably prophetic monologue showcasing his devotion to the cause and his undying adulation of the bears, Treadwell's video diaries were the stuff of myth. Virtually shunning the society that spawned him - he was born into a normal family and became the all-American blonde surfer until drugs forced their way into his life - Treadwell found a new vocation, a spiritual calling, in fact, that drew him northward to the wilderness in a self-styled exile that saw him becoming at one with nature. Or so he thought. Creating a bear foundation and gaining limited funding from the government, he eked out an existence that he believed forged a bond between himself and the bears that no other human could achieve. He went right in amongst them to not only capture their behaviour on camera, but to become their friend and confident. Besides actually singing, talking to and petting them, witness his advising a fight-fatigued male on how to win back his mate. Or his just plain loopy love-affair with a fresh pile of bear-poop. Yet, despite such oddball antics, he still managed to catch some of the greatest close-up footage of these awesome creatures ever obtained and, regardless of his ethics or his frankly deranged methods, he definitely knew his stuff. His films became immensely popular and were even used as educational tools for children (for which he refused any payment) and he gained notoriety after appearing on TV shows and being interviewed by the likes of Letterman and other semi-mocking media pundits.

But these part-charming (Treadwell playing with the most adorable family of foxes), part-shocking episodes (the harrowing results of a fish-famine on the bear's eating patterns) that dovetail ultimately into tragedy, mean that Herzog's Grizzly Man takes an unorthodox, even uncomfortably comic at times, look at how this good-natured man descended into paranoia and obsession.

Along the way we are treated to many asides from Treadwell's doomed path. We meet the pilot who found the bodies as he shows us the very spot where Treadwell's severed arm was found. We bear awkward witness to one of his closest friends receiving the watch from the afore-mentioned arm as the coroner removes it with almost religious reverence from an evidence bag. Herzog's penchant for uncomfortable moments is further sampled when we travel, with two of Treadwell's weird lovers, back to the final campsite to spread his ashes about the land he loved. By the way, this coroner crops up several times and, boy, is he creepy! Just listen to his re-enactment of what he believes to be the couple's final moments. Famously, of course, these moments were actually caught on video. Or rather the sound was caught. Quite by chance, the lens cap had remained on the camera when the attack took place. But, perhaps disappointingly, Herzog and the coroner are content only to let us hear their renditions of Treadwell being mauled and his frantic urging for Amie to run away - she actually remains by his side and fights to save him before the bear turns on her, too. I say disappointing because, after all this build-up and knowing right from the start that what had happened to them had been recorded, morbid curiosity gets the better of you and you actually want to hear this ferocious finale. However, Herzog tempers some of Treadwell's more frighteningly accurate statements about his death at the jaws of a bear being the one thing that would have his work taken seriously, by including such wonderful quotes from those being interviewed as, “that wound up being the bear they found Tim in.” Wow. And one of the authorities speaking can barely even keep a straight face when talking about Treadwell. He's the one in the photos with the walrus-whiskers.

Although people obviously accuse Treadwell of being mad, I would hesitate to be so judgemental. Exhilarated, slightly anarchic, but wholly, one-hundred percent committed, and forever honest to the point of often painful confession, Treadwell is just such a likeable guy. So likeable, in fact, that it is nigh on impossible not to become emotional about his plight as we draw near that sad conclusion. Misguided, yes. Devoted, certainly. But bonkers? Well, to all intents and purposes, I suppose, and damningly so by society's standards. But it is hard not to think of him as a real-life Dr. Doolittle, albeit with language that is a bit more colourful than Rex Harrison's - especially when cute fox, Spirit, and her cubs pinch his hat and scamper back to their den with it. There's even a fantastic moment of divine reply that Treadwell captures magnificently as he lies in his tent loudly cursing the gods for the lack of rain that is depriving the bears of their essential salmon run. Suddenly, the heavens open and a torrential downpour engulfs his vast idyll, answering his and the bears' prayers. Now that's pure theatrical timing, folks.

At which point did Treadwell's crusade cease to be an ecological study and become a protracted personal deathwish? Perhaps the whole enterprise, even from its noble beginnings, had been nothing more than a visual suicide note - just a blissful, flipping-the-bird bow out in a uniquely individual way. Whatever his primal concerns, though, he meant well, and, at the very least, he managed to find for himself a rare harmony out there in the wilderness that countered his increasing bitterness towards the world of man. It's quite apparent that he had made a pact with his own mortality and I certainly don't think that Herzog has used such on-camera quotes in a particularly steered manner, making this fatalistic tone seem orchestrated, or pre-ordained just for the sake of the documentary's own inevitable narrative. Treadwell said these things and Herzog is obliged to make use of them. The feature is not all Treadwell's footage, however. Herzog neatly balances the doomed naturalist's own captivating film with many asides into his life as perceived by others. Interviews with his parents (his mother is seen clutching his favourite childhood teddy bear), his friends and associates and even those that found his remains paint a picture of a man who was very well liked, tolerated and even idolised. His increasingly odd behaviour seemed to surprise no-one - he even told tales that he was from a small town in Australia rather than his native California - and there is some evidence to support the notion that it was losing out on a part in the classic comedy Cheers to Woody Harrelson (you can plainly see the similarity between the two) that drove him over the edge into a bear-besotted dementia. Herzog's fascination is equally unsurprising. Through his weirdly idiosyncratic narration and his erratically composed interaction/direction with his interviewees, it becomes abundantly clear that he, himself, has bonded more fully with Treadwell than the bears ever would. They are kindred spirits in many ways. Both are immensely driven, difficult and obsessive individuals ... and both are in love with filmmaking. Time and time again, Herzog is moved to find the artistry behind some of Treadwell's shots, such as a lull between some naff takes that focuses, quite by chance, upon some swaying shrubbery. His harshly whispered voice strikes up a melancholy underscore to Treadwell's Sesame Street-style camp excitement (“Hey, there's Mr. Chocolate,” Treadwell hails one of his huge furry friends, “Hi, Mr. Chocolate!”) and there is a soft sadness to his opinions on his subject's heartfelt misjudgements. The director of such films about similarly pain-wracked, emotionally-wrought obsessives as Nosferatu, Aguirre and Fitzcarraldo was drawn to this saga like a moth to a flame. Maybe he sees something of himself in the self-torturing, self-deluding zeal of Treadwell and, equally, maybe he sees this cautionary tale as one particularly relevant to himself.

Of course, whatever drove Treadwell to lead such a perilously hedonistic lifestyle will probably never be known. But, by the same token, I didn't expect to come away from this with a feeling of admiration for the guy and his misguided achievements. Yet, somewhat ironically, I do. As a lover of wildlife, myself (with numerous adoptions at Chester Zoo and a slightly dormant, at the present, involvement with bat conservation being the sad extent of my commitment to the ecology so far) and possessing the same inner rage at any harm to animals or their environment that led to Treadwell's overwhelming paranoia at human encroachments to his “sanctuary”, I found my heart going out to him. What he did was wrong - man cannot live alongside such wild animals in one big Disney-esque fantasy woodland - although it was done for the right reasons. He could have been a powerful weapon in the arsenal of the ecology, but his fragile state of mind turned him into a grisly sideshow (pun intended), eclipsing an endeavour that should have been a shining example of respect for the natural world to us all.

Grizzly Man is extremely compelling, folks, and comes very highly recommended. I just wonder what David Attenborough would make of Treadwell adventures. Anyway, all this bear-talk has fuelled up a desire to re-visit that 70's shocker, and a real guilty pleasure of mine, William Girdler's Jaws-with-paws, Grizzly. Recently released in a splendid 2-disc Special Edition, look for a review soon.