This was not a camping accident! 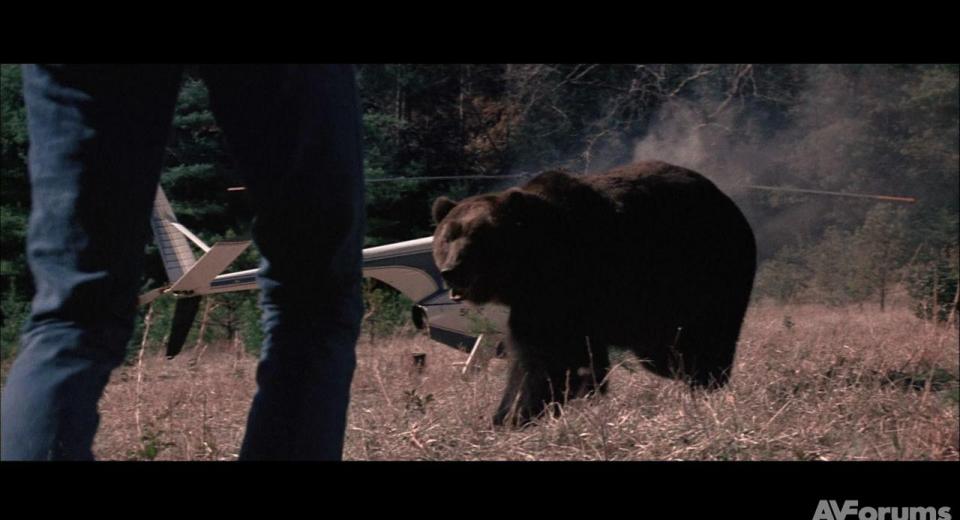 I can do anything … I’m the chief of park rangers.

When I first played this French BD, I was disappointed. It looked like it had washed-out colours, a hazy contrast and no finer detail than the SD version released by Shriek Show.

But then I played that earlier DVD to compare the two images. And, with some small reservations, I can testify that the hi-def transfer is definitely an improvement. Well, by rights, it should be, shouldn’t it? Presented in its original theatrical ratio of 2.35:1 in 1080i via an AVC encode, William Girdler's B(for Bear)-movie opus could still certainly look better with a fully progressive transfer from a restored master. It has always looked soft and somewhat muted, and it still does. Yet whilst obviously not a patch on more recent fare, and with a few concessions made for its vintage and the quality of film stock that was used, Grizzly still rewards us with a better resolved image than initially meets the eye.

Scan the forest, itself, and the branches, twigs and leaves have more distinction. The ranger tabs on the shoulders of those natty forest jackets, for instance? A whole heck of a lot sharper and more cleanly delineated. Characters stand better defined, even against those often soft and indistinct backgrounds. Contrast has always been a bugbear with this film too. It is just too light, mimicking a lot of American broadcast television, and I can’t really imagine much ever being done to alter this. The hi-def image is stronger in this department – interiors have greater shade, and this doesn’t fluctuate as much it did in the DVD, and the location work possesses a little bit more vitality – but don’t expect miracles.

I mentioned that I thought the colours looked washed-out. Well, it seems to me that the timing is a touch toned-down in terms of the bright, livid H.G. Lewis-style gore that many will recall. The splashy reds are not quite as striking here – which is a bit of a letdown. But I suppose this actually makes the aesthetic a little bit more realistic. Poor Ranger Tom’s blood-smeared body in the wreckage of the collapsed Arrow Tower actually always did look quite faded, which this replicates, but the claret elsewhere was certainly more garish in the rest of the killings. There are a couple of bits when the blood even goes a little orangey – sort of reminiscent of the mix that Tom Savini produced for Romero’s Dawn of the Dead, but don’t you fret none, ‘cause the bloody bits still look mighty gruesome … especially the girl’s body that drops down from the rafters in front of Kelly and the unpleasant image of a little boy’s gory stump of a leg..

Detail is, at best, fair (or fur, if you like) but never all that good, and whilst close-ups often offer a wealth of cracked, weather-beaten faces and there is some attention to the patterns on clothing and the clarity on the rifles and the radios etc, middle-ground information is softened-up considerably and anything further back is pretty much rendered as mulch. Still, I did notice that background footage is now a good deal better than it has ever appeared on home video before, and even occasionally helping to deliver some reasonably impressive landscape sequences where detail on far off trees and hills comes across quite vividly.

There are still plenty of times when the faded print pretty much eliminates far off hills and valleys, but then I’d never noticed the bubbling stream over Scotty’s shoulder when Kelly’s radio call ruins his deer-trailing mission near the start. Look at the old cabin that offers zero protection to a frightened girl – much more sharply rendered now, with none of those fuzzy edges. Or the ranger jeeps and Don’s helicopter. The sequence of the hunter who gets hunted and pursued across country by the bear now appears sharper, with his orange vest better rendered amid the foliage. But the best example has to be that of poor Scotty's slashed face as he painfully awakens under the dirt of his own shallow grave. Check out the image I've supplied. Obviously filmed on-the-hoof and with a variety of film-stock and cameras, the movie is understandably, and agreeably, rough ‘n’ ready.

So there are definitely improvements made over the SD image.

And now the shadows are deeper, with the black levels more robust. Night-time scenes certainly benefit from this, and the sequence when the Rangers are searching for one of the girls from the first killing, which takes place in an eerie ground-mist, now looks far more atmospheric, with a better blend of greys, blacks and torch-light. Other nocturnal moments gain vigour from the depth of the darkness, and I would hesitate before claiming that any details have been lost within them. Checking back to the Anniversary DVD reveals nothing extra to found there, either. This said, there are times when the murk seems to obscure an awful lot, almost as though Peter Hyams was in charge of the shoot. Night-time plan-making with the hunters and the rangers may look realistically dark, but you really are squinting to make out what’s going on.

What mires this transfer is the appearance of some vague digital noise that speckles it. This reminds me – just a little bit – of the frozen lattice-work that ruined some of those Italian horror BDs from Arrow. Now, this is nowhere near as bad, and if you don’t go up close and looking for it, chances you won’t notice it at all. But this does rear up the ugly question of whether the image has been DNR’d and then re-grained. Well, I can’t imagine that it has been, although this frosted grain can err on the side of digital noise.

For the record, there is no edge enhancement and no banding, or smearing taking place. The image is more stable than previously, and not as juddery, but I did pick up on some minor aliasing going on. I was too quick to dismiss the French transfer. Overall, it is definitely smoother, cleaner and more defined. A 6 out of 10 seems poor, but I'm sure this could look better.

Those screengrabs taken from the disc, by the way, do not do the image justice when you see it in full motion. It’s all psychological. You yell squirrel and everybody says “Huh? What?” You yell Grizzly, and we’ve got a panic in the park on the Fourth of July!

Thankfully, there are no burned-in subtitles and the film plays just fine in English … albeit in plain old DD stereo, so you know going in that there will be no surround or sub activity. There is obviously a French track, as well, and this is also a DD stereo mix. I haven’t listened to that track.

Well, this is vintage and extremely low-budget material here but even with these provisos in mind, Grizzly doesn’t sound too shabby, to be honest. It is debatable how much better a lossless track would actually be, and if it was authentic to its source, then it would only be in mono. As it stands, there is noticeable separation across the front – characters’ voices, chopper movements, the bear grunting and roaring, gunshots etc. Dialogue is all very tinny and restricted, and it should be remembered that the post-synching on the film was not always very accurate, so there is an inherent “cheapness” to the whole deal. Arguably, though, this rough-edged style only adds to the entertainment value of such exploitation material. But there is some punch delivered to the track with regards to the action. Timbers smashed asunder by the bear have a terrific wrenching violence, and bodies hitting the deck from all sides of the frame have a solid thumping weight to them. The bear’s roar is limited in its reach, but it still sounds bone-chillingly sharp and immediate. I like the grunting noises it makes, and especially the demonic heavy breathing that poor Scotty hears behind him, because there is a depth and realism to them that mix, no matter how old and restricted, cannot mask.

Ragland’s raggedly score gets a decent workout. That swirling horn cry that signifies an attack, and the synth that sheathes it, together, make a chillingly primal sound, and the mix allows this to reach an alarming crescendo. Sadly, the Love Boat noodlings also gain more life and buoyancy.

I am happy with the audio here. It does exactly what it is supposed to … with raw, vintage gusto. Nothing at all here.

Fingers crossed that the US release will contain all the material found on the 30th Anniversary double-disc edition. More, even. Wanna get drunk and fool around?
Does a bear sh*t in the woods?

Grizzly is a great little B-movie that dipped its claws into the big pond that Spielberg's Great White Shark dominated, and certainly held its own ... treading water for a little while, at least. I love the film - it gave me goose-bumps when I was a kid and it still creates a sense of danger and terror even today. The three leads are immensely likeable - stalwart lesser-knowns doing their damnedest to bring their characters to life, and the level of butchery on show is actually far more shocking than you'd expect. It may be cheap but it is effectively nasty, too. Grizzly certainly still has bite, nearly forty years on.

Great schlocky fun, folks, with an agreeably mean streak running through it.

But although I totally endorse the film, I suppose I cannot really justify anybody other than the most devoted fans purchasing this French release. Unless you are French, of course.

The 1080i transfer is fine enough, without a full restoration being undertaken, but some people may have qualms about the appearance of the slightly frosted grain sitting atop what looks like a soft TV broadcast. Personally, I wouldn’t worry too much about that because it doesn’t distract or interfere with the film, unless you want it to. There is also the fact that the picture here is not as vibrant or as colourful as the previous SD edition transfer, though you would really have to sit and compare the two to actually appreciate this. And this hi-def image genuinely improves on it in terms of detail, definition and black levels. The complete lack of extras – bear-bones, anyone? – can’t help but drag this release down a couple of notches, though. Especially when you consider the material that graced the Anniversary Edition.

Grizzly deserved better than this. Hopefully Scorpion will redress the balance later in the year with a Blu-ray release that does Girdler’s ace eco-horror justice. But, in the meantime, this is a very decent version of the film that certainly promotes its visual aspects with more pros than cons …