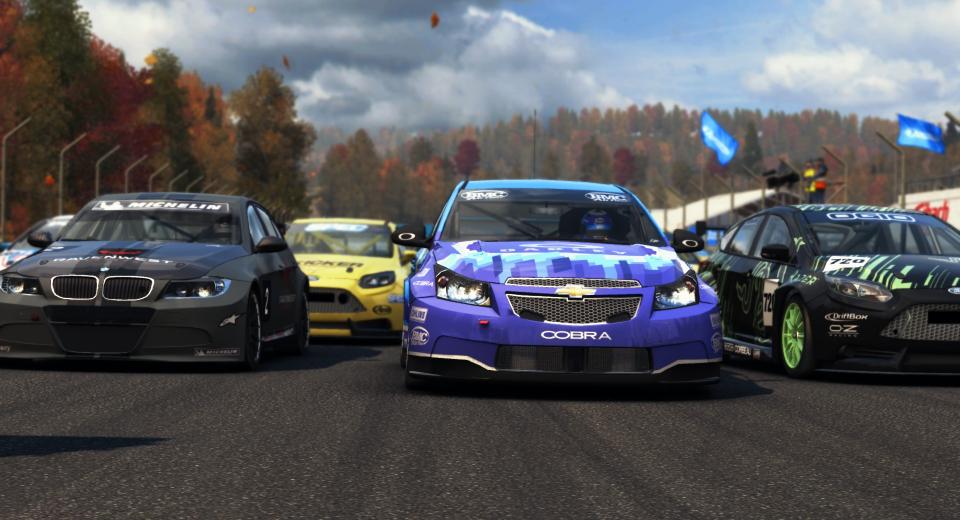 There’s a subtle distinction in the way GRID Autosport presents its lineup of automotive pleasures in comparison to its rivals, but it’s nonetheless telling. This is a game all about racing rather than obsessing over a set of ridiculously expensive carbon fibre curves, and while the cars themselves handle beautifully and don’t lack for attention to detail, Autosport builds its appeal around a wide range of disciplines that demand you approach them on their own terms.

Events are split up into five distinct categories that can be attacked (or ignored) in any order: “Street” and “Tuner” will be most familiar to those with experience of Codies’ drift-heavy DiRT series, while “Open Wheel” and “Endurance” borrow more than a little from their F1 product, sending sticky-tyred modern and classic vehicles on timed laps around iconic race tracks with suitable mechanical wear and tear. “Touring” mode is likely to attract most attention however, finally delivering the sort of nostalgic TOCA-style jostling that went missing after Codemasters’ glory days on PC and PS1. In many ways, this is the GRID 2 that hardcore fans were waiting for. Presentation is clean and sparse, and the tone altogether more serious. The re-introduction of teammates and race rivals contribute a little towards the sensation of building a career, whilst your radio crew can now be triggered with a quick stab of the d-pad. Crackly information is relayed back to the driver about race leaders, car damage, pack position or the whereabouts of anybody else sporting the same livery, and while the resulting chatter does end up a little repetitious, it’s welcome nonetheless.

In comparison to TOCA those little touches might be criticised as surface-level depth (there's none of the "build your own team" mechanics to be found here), but they succeed in adding at least a dash of colour and atmosphere. Individual sponsors dole out XP in return for finishing above named opponents and raising team performance, but with so many different race types and team re-allocations happening across each of the 2-10 race "seasons", Autosport simply jettisons any plans to build an overarching narrative. Moment-to moment rivalries and the jabbering of your race crew provide all the tension. The lack of story doesn't really matter too much in that sense, because the strong and aggressive racing AI usually turns each lap into a mini-drama anyway. Opponents are perfectly capable of giving as good as they get when jostling for position, nudging you out of your line, tearing away from imperfect cornering whenever the opportunity presents. In that light, simply fighting your way to mid-pack from a rear-grid start can feel uncommonly rewarding on default difficulty and assists, while qualifying laps and practice sessions are available for those that want to hone their technique to perfection.

Vehicle handling - at least in the more serious racing categories - has also been reined in a little from GRID 2's rocket-fuel propelled sliding beasts. Autosport is still on the arcade side of the simulation divide, but in keeping with the tone of presentation, it's only there by the skin of its teeth. The cars feel a little more weighty whether you're driving a classic mini or a modern open-wheeled death trap, while endurance races factor in tyre wear over the course of their 6-15 minute durations and drift events cut loose with ridiculous rear-wheel accelleration and sensitive throttle controls.

Taking things further, the reintroduction of two cockpit cameras also comes as a relief for those burned by their omission in GRID 2, but unfortunately the execution is more than a little lacklustre. The year-long turnaround between GRID 2 and Autosport was never going to be enough time to model the interiors of every car to a suitable standard, and the resultant blurry dashboards cover up a lack of detail with the equivalent of a visual sticky plaster. Those fuzzy interiors do serve to focus your viewpoint on the asphalt at the very least (the style is very similar to that used in Watch_Dogs), but I can't shake the feeling their inclusion came with too many compromises.

And while the singleplayer racing tiers offer a lengthy and varied campaign that'll keep people happy for upwards of 40 hours there are, nonetheless, elements of familiarity to be found within its track selection. Autosport does feel a little like a Codemasters greatest hits compilation at times, and although the selection of circuits adds up to a total of 22 individual tracks with 100 route variations, if you've played through GRID 2, F1 and the DiRT series, you’ll know many of the turns and chicanes off by heart. It’s a comprehensive and varied selection by any yardstick, but ultimately falls foul of their quick succession of releases. As the lengthy campaign continues thundering on and begins to wear its content thin, there's always the excellent RaceNet-powered online offering to take its place. It's here that Autosport most resembles a traditional driving game, allowing players to purchase and collect a garage full or cars, pick from several race playlists and try to outgun the opposition for cash rewards. The 12-player sessions and party system are easy to dip in and out of, and as ever, even the most basic of human opposition usually results in a spectacular first-turn pileup or the most close-fought races in the entire game. Lag rarely rears its head, and on the whole this is one area of GRID that actively benefits from closely mirroring its predecessors.

Whether you're online or offline, the much-lauded EGO graphical engine keeps everything running along at a smooth 60+ fps on ultra settings on even modest PC hardware (my now entry-level 660ti barely broke a sweat at 1080p with 4xMSAA), but there's little in the way of extra visual polish over previous titles. Autosport's grass looks a little nicer, tyre smoke is more varied, heat haze and night-time bloom all look more realistic, but besides a few additional tweaks to colour saturation and lighting intensity, that’s about your lot. GRID Autosport is not a bad-looking game by any means, but its certainly racing over extremely familiar territory.

The level of entertainment you'll extract from GRID Autosport is closely tied to your experience with other Codemasters racing titles. If you've scraped the DiRT, GRID and F1 series for content then you might well find yourself close to burnout with this latest release (and deduct a point from the final score on this review), but if you've only sporadically dabbled with the series in the past, there's certainly enough variation in both racing disciplines and track types to keep your interest until the end.

The return to a more sombre tone brings expectations of more realism to the fore, and although it's some way off being a Forza or Gran Turismo, the vicious AI demands a good level of concentration, reaction and consistency throughout. Open Wheel and Endurance modes perhaps best capture the tone of Autosport, but Touring will be the heart of the campaign for those weaned on the PlayStation classics. Save for the missing team-building mechanics, it doesn't disappoint.

GRID Autosport is a thoroughly entertaining and lengthy mashup of Codies' previous work then, but if you're a fan of the band, you'll know that sometimes a Greatest Hits album just doesn't quite cut it. Newcomers or casual dabblers however, are in for an absolute treat.