You got story up in my racing 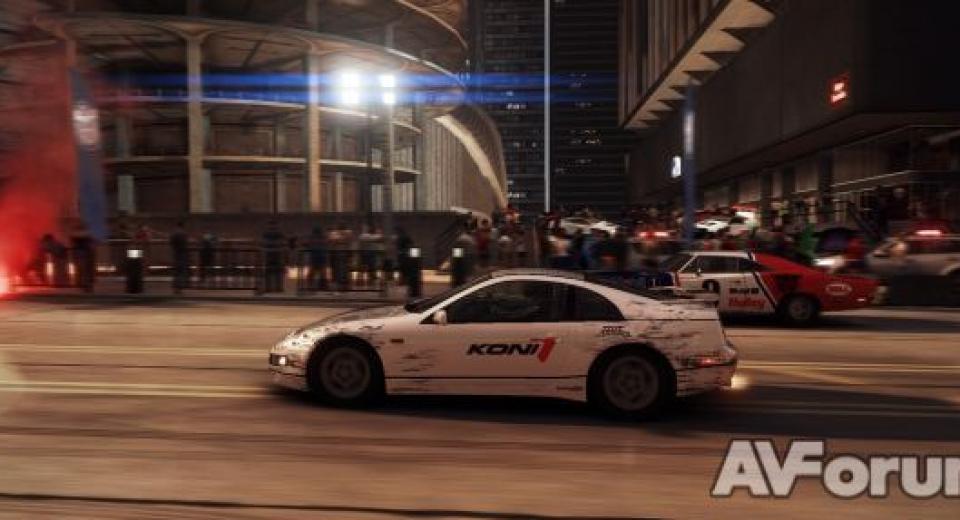 If motorsport games are remembered for a single race variant, then GRID 2 is the land of the Eliminator. The fifteen-second countdown timer ticks along as if it were attached to a bomb, resetting itself with metronomic consistency as the rear of the pack is thinned by another driver. Keep your nerve. Only a few more to go. Background music - initially just a slice of thumping bass underpinning the growl of your engine - ramps up in intensity and delivers its full dramatic payload in the final few corners. These are races as Hollywood spectacle. Fast and furious set pieces that are usually gone in little over 60 seconds.

The selection of cityscapes and racing tracks allow the same dramatic focus to be pulled on evocative lighting and visual flair: Barcelona in hazy afternoon sun; a moody Chicago complete with sparks showering vehicles from the overhead monorail; Dubai with a smoky neon sunset; and those are just a few. The range of vehicles is enticingly selected for each discipline, and if life in Project Gotham Racing 3 famously began at 170, then life in GRID 2 begins at 180. Sideways.

That’s the DNA oozing from every pore of Codemasters’ high-speed, powersliding framework, and like previous games in their stable, GRID 2’s singleplayer campaign is somewhat narratively focused. This is racing as experienced through a series of TV-skewed seasons, in which you rise to prominence under the gilded wings of a private race entrepreneur. Each of the seasons is bookended with ESPN-sponsored studio cutscenes that focus on your popularity amidst the newly-minted World Series Racing organisation, with every tier of the championship unlocking new teams to impress, vehicle sponsors to win, Facebook followers to amass and Twitter comments to funnel into your success story.

It’s a concept that fulfils its remit for generating a little player investment in the racing structure, but it’s also one that’s been done before, and GRID 2’s media-driven popularity quest might not please everybody. Fans of the original game in particular might feel a little irked by the faux-serious tone and lack of bizarre race settings, whilst the dramatic score becomes a little tedious at times. It’s nothing if not varied and fast-paced however; any single session can see you racing through a series of short point to point or circuit races, mixed with the aforementioned eliminators, checkpoint challenges or overtake events. Further to those are promotional events that showcase individual vehicles, and special one-off versus challenges to shepard even more “followers” to your virtual altar.

With most events taking only a couple of minutes to complete, GRID 2 could never be mistaken for a simulator; a fact further signalled by the controversial omission of a cockpit view. This is a pure arcade racer with Codemasters’ drift-heavy DiRT engine underpinning its action, and that means you’re just as likely to spend the majority of your time rocketing through turns sideways as you are head-on. It’s tactile, responsive, and a lot of fun.

There are a few catches though. The sensation of speed is bordering on ridiculous when playing from my personal preference of bumper-cam, and visibility is so reduced at that angle that I had to switch up to the bonnet for races on circuits such as Brands Hatch; you can barely make out turns in the blur of sun-drenched asphalt that low to the ground. And while it starts strong, that sensation of pace and rear-end swing gets even more pronounced at the latter stages, to the point that GRID 2 can almost feel too fast at times. Pulling the camera back is an option, but it’s one that comes at a cost of immersion.

It’s tough too, with most races demanding true mastery of high speed cornering and drifting to unlock the podium. The emphasis on speed generates a degree of handling twitchiness that’s compounded by aggressive AI drivers, but whilst the rewind feature comes in useful for erasing the chaos introduced with a slight flick of a fender at 190 MPH, GRID 2’s finest moments are also generated from that same rocket-powered knife-edge cornering. Slingshotting your car around a couple of rivals and barely holding grip is wonderfully exhilarating when it results in a narrow escape, whilst the responsive controls allow for quick counter-steer adjustments and throttle balancing to help correct mid-turn catastrophes.

Online, the story is much the same. Codemasters’ RaceNET servers do an admirable job of tracking your every move, and the short and snappy playlists ensure the disappointment of a loss is swiftly erased with another round of carnage. There’s a whole structure of cars to be unlocked with cash rewards here too (completely separate from single-player), and there’s a huge amount of potential for those that don’t even want to touch the offline modes. Performance has been smooth in my time with the game thus far, and the servers are likely to be packed at least for a month or two before folks move on to the next big thing. I’ve not had an issue finding a game at any time.

It’s fun then, and - on the PC at least - extremely polished. Although clearly still cut from the same cloth as previous Codemasters titles, GRID 2 performs admirably on my mid-tier 2GB 660Ti, with Ultra settings regularly hovering above 60fps even when downsampled from a resolution of 2560x1440 with 4xMSAA thrown into the mix. There are a few stutters when piling into a corner with 11 other cars but it’s nothing that ruins the fun, and if there are any of you left out there that pay any attention to 3D, GRID 2 works beautifully well despite a lack of accessible convergence controls in 3DTV Play mode. It happily chugs along at 60fps and 1080p on high settings with 3D engaged on my modest setup.

GRID 2 is a polished, assured and at times overly-dramatic racing game that sits comfortably outside the remit of Codemasters’ other titles. Whilst I can’t escape the nagging feeling that the studio can’t get away with another round of titles based off the same technology and franchises, this is nevertheless another welcome entry in the series, despite eschewing a little of the technical, weird focus that made the original great.

If you understand that GRID 2 is an arcade racer first and foremost, and you’re not looking for the next huge leap from the talented teams behind these games, then it’s well worthy of a look during the long summer drought.