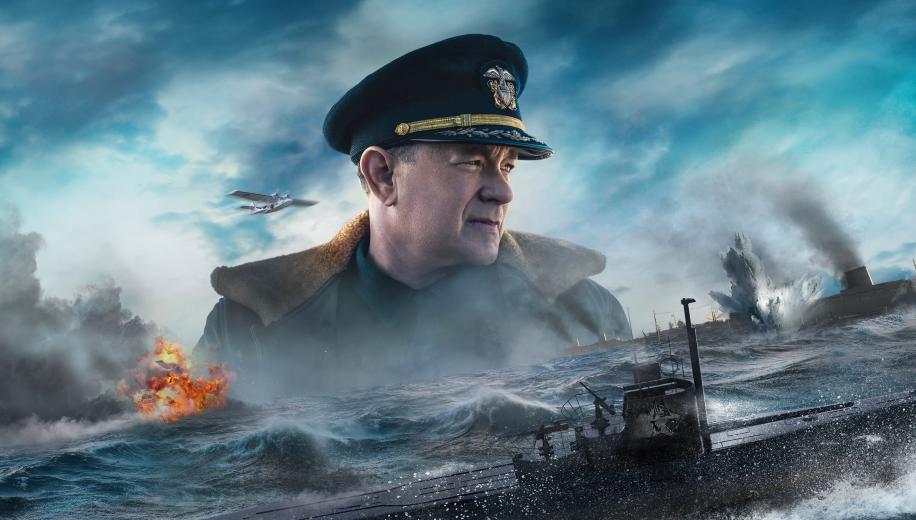 Hanks has got good form when it comes to WWII, almost entirely courtesy of Saving Private Ryan (although - behind the scenes - he also reunited with Spielberg to executive produce both Band of Brothers and The Pacific), and is a go-to actor for portraying brave, honourable but also largely everyman heroes, in true-life productions like Captain Phillips and Sully. Here he takes on rare screenwriting duties - he's actually directed a couple of films: That Thing You Do and Larry Crowne, and those are the only other times he's penned the script - for what feels like quite a labour of love, translating C.S. Forrester's acclaimed novel, The Good Shepherd, into a lean and tense wartime thriller which doesn't have a single minute of wasted screentime.

You know that if Michael Bay had had a hand in this it would have been 3 hours long and cost a quarter of a billion, and proven infinitely less watchable

As the US joins WWII, 37 Allied ships head across the North Atlantic to engage in the battle, with Commander Ernest Krause given command of a destroyer, callsign Greyhound, and tasked with protecting the fleet from U-boats; an unenviable task when the fleet is targeted by a Wolfpack of German subs.

Greyhound would have been a bloody good watch on the big screen, enjoying the best alternative of 4K UHD streaming on Apple TV Plus, complete with Dolby Vision and Atmos to boot, and looking absolutely spectacular as a result. Shot through with a near-monochromatic blue-twinged slant (but for the warm internal lighting), it's a gorgeous looking production, reportedly budgeted at $50 million, but you know that if Michael Bay had had a hand in this it would have been 3 hours long and cost a quarter of a billion, and proven infinitely less watchable.

Indeed, part of the glory in Greyhound is that it doesn't waste a minute getting to the meat, giving Elizabeth Shue the thankless task of attempting to humanise Hanks' lead in a single shore-side scene when the reality is that you get to know him much better in battle. Within minutes of the air support dropping off, the fleet comes under attack, and it becomes something of a survival piece - akin to being circled by a pack of sharks - with night a particularly treacherous time, and a ticking clock of 36 hours until air support resumes.

Hanks is front and centre for the entire piece - ably supported by Stephen Graham (The Irishman) as his second in command (and Daredevil's Rob Morgan as his loyal and concerned chef) - and he's absolutely superb as the God-fearing Commander who has to make some tough choices to survive the night(s), with no sleep or food - and eventually very little ammunition - while he keeps watch over his flock, increasingly aware that his more experienced crew are starting to question his every decision. As the ships are picked off one by one, and torpedoes whiz past dangerously close, tension is ratcheted up to an absolutely unbearable level, and the resolve of Hanks' Commander is tested to breaking point.

The action is fantastic; certainly some of the best naval battle sequences of the 21st Century (perhaps only Master and Commander stands a chance at competing), with impressive use of effects (again, the benefit of a curt runtime means they can put every dollar into every second of footage) and a superbly tense score from Blake Neely (who also did The Pacific). And for a sophomore directorial effort - Aaron Schneider only did one previous film, the acclaimed Robert Duvall drama Get Low, over a decade ago - it's a hell of a ride, reminiscent of sub movies like The Hunt for Red October with its sonar-based dip into treacherous waters full of sharks, positioning Hanks well as the clearly very skilful Commander guiding you through the nightmarish voyage, and giving him just enough character to offer some welcome depth to this unbearably tense ride.