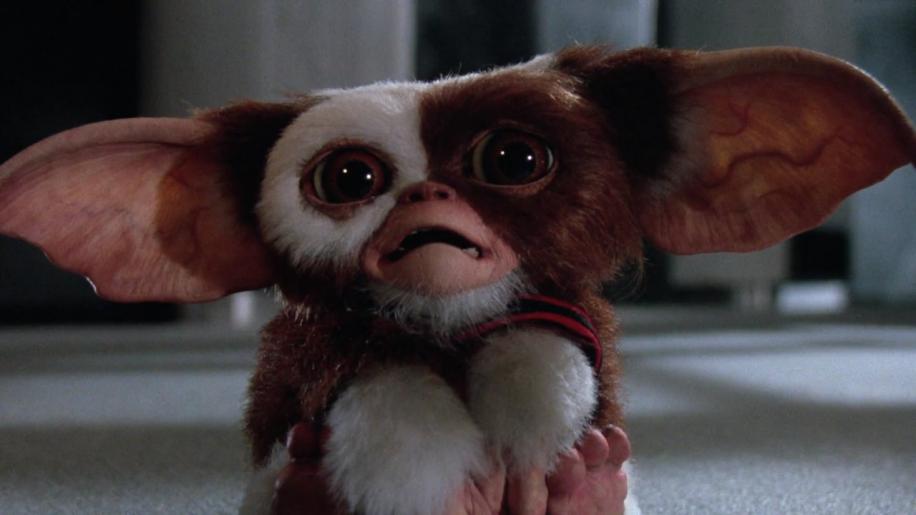 Any film that you watch can have an interesting slant put on it and here's mine for this 1984 smash hit Gremlins. Prior to working on this particular feature Joe Dante teamed up with a number of other top notch directors of the time to contribute to the Steven Spielberg produced, four story, Twilight Zone: The Movie. One of the short stories contained within that unfortunate production was the George Miller (Mad Max 1 & 2) directed fourth segment, a reworking of the 1963 television episode Nightmare at 20,000 Feet. The original starred a then relatively unknown William Shatner in the lead role. The original story was directed by one Richard Doner, a man best known for The Omen and Superman. It's a small world really isn't it?

Can you imagine the scene though as Spielberg wanders through the set of Twilight Zone: The Movie speaking to Dante and discussing the connections between the remake of the gremlin on the plane and its earlier counterpart? Can you just see one of them create a phantom lightbulb over their head and like James Cameron say... “What if there were hundreds of them?”. Now of course I don't know if this is how it all happened but in my own small world it makes perfect sense.

So a year later Spielberg produces another Dante movie, this time Gremlins. Released on 8th June 1984, the same date as Ghostbusters, and although I enjoy them both I tend to prefer the darker humour contained in Gremlins. On that date two camps evolved, those who enjoyed Gremlins and those on the Ghostbusters side of the fence. Which one did you prefer?

Like many films from that particular era, and let's face it 1984 was a great year for popcorn movies, the story is a simple enough affair. Randall Peltzer (Hoyt Axton) has left the high street and is searching darker corners for a special Christmas gift for his son, Billy (Zach Galligan). On entering China Town he is taken to a darkened establishment and the owner's son sells him Gizmo, a Furby by any other name. Three rules must be followed at all times, do not expose Gizmo to bright lights, do not expose Gizmo to any amount of water, and especially do not feed Gizmo after midnight.

Unfortunately for Billy and the town's people around him these last two are not adhered to. Gizmo multiplies rapidly after having a small amount of water dropped on him. Being tricked into feeding his more rebellious 'offspring' they hibernate in cocoons; it's not butterflies which emerge afterwards though! These cocoons give birth to the most rancid, evil creatures this small town has ever experienced. Let the havoc commence.

I loved the Eighties from a movie point of view, I was visiting the cinema quite frequently taking in all of the fantasy and action flicks that I could ill afford at the time. It was a great time for fun movies and Joe Dante gave us large helpings of that. Prior to this outing he tried his hand at tongue in cheek werewolf with The Howling and the afore mentioned Twilight Zone: The Movie. He would go on from here to direct other fun special effects extravaganzas such as Innerspace, Matinee, Gremlins 2 and Small Soldiers which was Gremlins by any other name really. He was very much like his audience, he wanted to be entertained by what he was watching or directing, he wanted to put some of the fun back into celluloid, and Gremlins was one of his darker attempts at tickling the collective funny bone. Dante knows his fantasy films and wanted to pay homage to them in various scenes here. In particular look out for struggling inventor Dad at the technology fair. Sitting behind him is the original Robbie the Robot but more importantly further into the background sits the original time travelling machine from George Pal's incredible 1960 The Time Machine. In one scene it is seen starting up, in the next 'poof' it's gone to God knows where in time. Being a film released in the summer but yet set at Christmas Dante also brings to the fore references to other classic winter tales. On television you'll see re-runs of It's a Wonderful Life, the town in which Billy, his family and his girlfriend, Kate (Phoebe Cates) live in Kingston Falls, obviously sounds like and resembles the idyllic Bedford Falls but was, in fact, the same set that was used for Back to the Future, and the evil witch of the piece is a straight copy of the Wicked Witch of the West from The Wizard of Oz. He knows his stuff and he's not afraid to let people know it.

He and writer Chris Columbus, yes the very same who went onto direct two Potter films as well as the studio production of Rent, somehow managed to fit gratuitous amounts of violence and dark humour into what was being marketed as a kiddies film. Again they score a bullseye. Although Gremlins was a fly in the ointment for the censors, they never knew how to rate it so, along with Temple of Doom the powers that be were more or less forced to bring in a new classification: PG-13. Dante and Columbus knew though that this is what the kids wanted, for far too long had they been subjected to sugary sweet tales from Disney, now the time was ripe for these two to corrupt the younger viewers little sponge like minds with humour of a darker tone. After all haven't most kids enjoyed the evil stories from Grimm's Fairy Tales and
onwards?

The main players, Zach Galligan and Phoebe Cates never really set the world on fire with their acting talents and whilst Galligan has continued apace in the film industry Cates involvement fell off somewhat. But the acting is not what Gremlins is all about, it's not really about Gizmo either, it's all about those slimey little bundles of fun. Both the Mogwai and the human actors were somewhat sundry, time fillers until we could see the mayhem these little green goblins would produce. And produce they do indeed, wrecking a kitchen, brake pipes adjusted, chain sawing through a department store or, like kids attending Saturday morning showings at the local flea pit, creating as much devistation as possible whilst watching Snow White. That sing-along with the dwarves has to be one of the funniest moments in movie history. If it's acting you want to see from this film then your eyes must turn to the dog, Barney. They never say work with animals but this dog must have attended R.A.D.A. He's alert, interested in Gizmo, shows apprehension when required, jumps to cue when Gizmo drives his little automobile around the department store. If there were Oscars for animals then Barney would win this one hands down. Lassie eat your heart out.

Our little evil doers were designed by Chris Walas, who had previously worked on Scanners, Raiders of the Lost Ark and of course that most influential of science fiction movies Galaxina. They have a look and feel to them that these days you just wouldn't get. Yes with CGI they could move a little better, have sharper teeth, perhaps have tails that wag in the moonlight... but they just wouldn't look as solid and vicious that these little beggers do. Technology still has some way to go, although by the looks of District 9 and Avatar it certainly seems to be getting there. The puppets were operated so well that you did immerse yourself into this film, you did believe that these creatures were real and you did feel a sense of dread (coupled with a little bit of internal glee) as they tweaked and stalked all around them in that little peaceful
town.

Gremlins is now 25 years old and it's still as enjoyable now as it was all those years ago. If you're looking for a Christmas film with a twist then you can do a lot worse than this and probably not much better. Still recommended viewing.