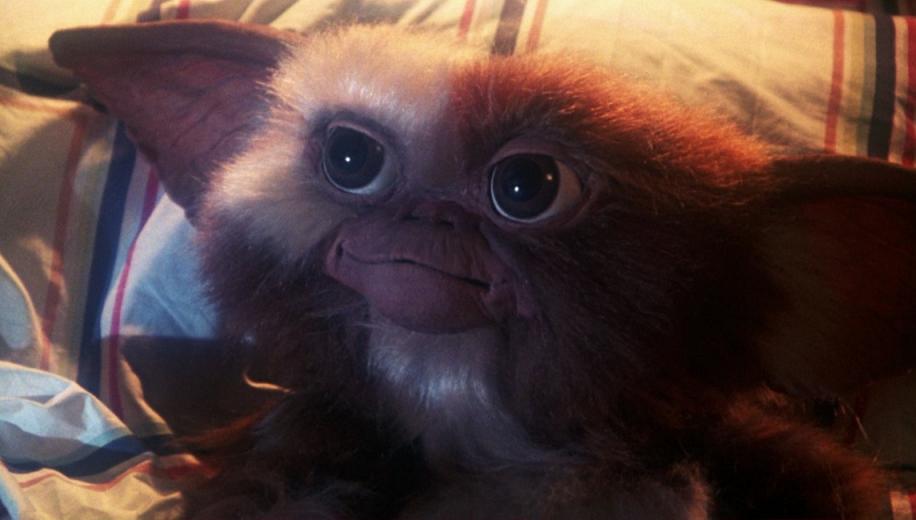 Mirth, mischievous and murderous, Gremlins, managed to re-invent the mould.

It’s 1984 and I remember the furore regarding the release of tonight’s feature, that had Barry ‘and why not’ Norman’s review stating his own reservations. For you see, Gremlins, was a pioneer, of sorts, a horror/comedy that was aimed at a family audience, with all the trappings of a Grimm fairy tale including the darkest of streaks; not only were the Gremlins of the title extremely mischievous, they were also quite deadly.

Directed by the deft hand of Joe Dante, but with executive producer Stephen Spielberg clearly pulling the strings, these two stalwarts combined their talents and melded to a terrific whole. Dante’s horror roots are clearly on show (the mother’s dispatching of the Gremlins in the kitchen) while Spielberg’s whimsy filters through (Gizmo riding a car through the carnage) and yet combined, they produce a story that is both scary and family orientated and best typified by the Gremlins in the bar scene, which could be considered a microcosm for the whole.


There is a deliberate pacing, with a strong build-up and when the mayhem starts, it is off the charts

Set at Christmas the film has exaggerated characters, but with a likeable chemistry between the two leads, and Gizmo is a pure delight. There is a deliberate pacing, with a strong build-up and when the mayhem starts, it is off the charts. This would be amplified in every regard for their second (and some say better) outing, but the audiences were by then prepared. This initial outing was quite the shock causing a whole new certificate to be introduced, the PG-13, and with no UK equivalent it was deemed a 15, which kinda missed the target audience.

Gremlins was shot using Arriflex 35 IIC cameras on 35mm film. The source for this release was made from the original camera negative which was scanned at 4K resolution and then utilised for the creation of this Ultra HD Blu-ray release. The disc presents a native 4K 3840 x 2160p resolution image in the widescreen 1.85:1 aspect ratio, and uses 10-bit video depth, High Dynamic Range, and is encoded using the HEVC (H.265) codec. We reviewed the Region free UK Ultra HD Blu-ray release of Gremlins on a Panasonic 65DX902B Ultra HD 4K TV with a Panasonic DMP-UB400 Ultra HD Blu-ray player.

Whilst the UHD is streaks ahead of the included aging Blu-ray, by the very nature of the filming style, measured against its peers, it is a tad lacklustre. Detail on the whole is well resolved, skin texture, Gizmo’s fur, clothing weaves all hold keen edges, while the establishing shots are well defined and sharp. ‘Snow’ on the Christmas trees and on the ground looks suitably fake, while internal furnishings, wallpaper, curtain patterns etc. are well defined. However, the style and film stock being used mean that the image, by nature, is naturally soft and no amount of extra resolution will resolve this.


Whilst the UHD is streaks ahead of the included aging Blu-ray, by the very nature of the filming style, measured against its peers, it is a tad lacklustre

The WCG and HDR add significantly to the picture, with bold vivid colouring that shows up how drab the Blu-ray is; check out the reds as Randall Peltzer first walks towards Chinatown, or the coloured Christmas lights on the various trees, likewise the green glow in the pupal casings. Flesh tones are well catered for, as are the Gremlins' skin tones.

Black levels are noticeable darker, holding a decent amount in the shadows; a lot of the film is in the dark and this adds some good depth to frame, but, again, the source is limited to very dark grey rather than absolute black.

Digitally, there are no compression problems, and the original source is free from damage, but it does have quite a hefty sheen of grain, especially early on in the snow, nothing to really worry about unless you are sensitive to such things.

Just a DTS-HD MA 5.1 track on the disc, but luckily it is pretty good. Effects are well taken care of by all the speakers, so when the Gremlins are wreaking havoc around the town square, the destruction they wrought as well as their chatters and the screams of the people provide a decent sense of immersion. Dialogue sounds very natural and is given tremendous directionality when required; indeed stereo effects predominate.


I just wonder what a DTS: X track would have made of it all

Bass is somewhat limited, there is a decent low end, but a lack of true LF effects (I counted two), though the score does make some good use, as well as utilising all the speakers. Ambiance is taken care of by the surrounds and overall there is a well-rounded effect; I just wonder what a DTS: X track would have made of it all...

Audio Commentaries – As Above.
Gremlins: Behind the Scenes – Six minute making of feature.
Additional Scenes – Play with or without commentary.
Photo Gallery
Trailers - Theatrical Trailer 1 and 2, and Gremlins 2: The New Batch.

Gremlins is a Spielberg produced, Dante directed horror comedy hybrid aimed at the family audience – it shouldn’t work, but it does. With a very dark streak, yet kept light enough for the intended audience (in the vein of Grimm fairy tales) it caused a storm on its initial release (and a new certificate) but continues to entertain and appeal to this day!

As a 4K UHD set, the package is ok; the native 4K image flattens the Blu-ray at every turn, with better detail, colouring and black level, but due to the source, the image is aged, a little soft, but with good colouring and a tad grainy. The DTS-HD MA surround track is a winner though with plenty of effects and a decent environment. The extras package is lame, though, and the included Blu-ray is ancient.