A far cry from Geostorm 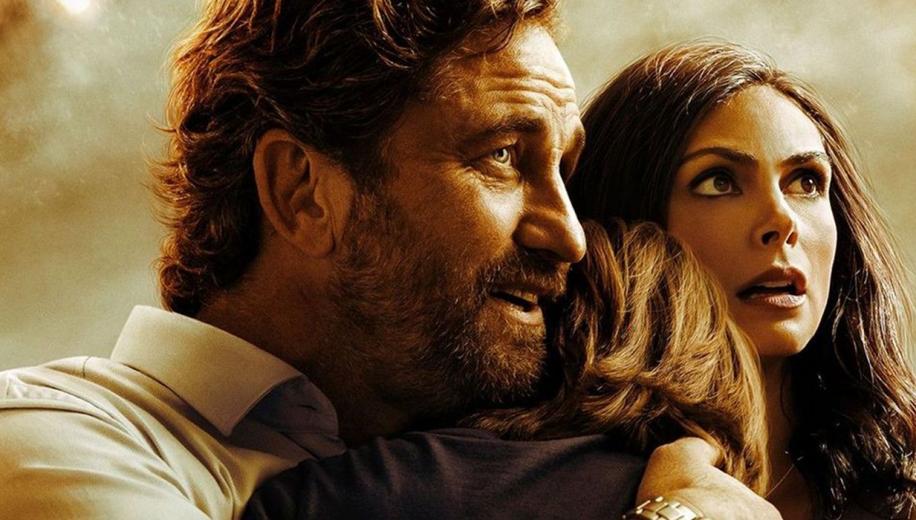 If you see the name Gerard Butler, and see a film beginning with G, and hear that it's a disaster flick, your mind will probably land square on the trashy 2017 effort Geostorm, which was a fun enough romp into the land of utter stupidity, following the Emmerich / 2012 rulebook to the T. So when you're told about a new one, this time called Greenland, and directed by Ric Roman Waugh, the guy who (notwithstanding having previously done the impressive Shot Caller) just finished a collaboration on Butler's latest "Has Fallen" actioner, Angel Has Fallen, and has signed up for two more "Has Fallen" entries next, you would be forgiven for expecting another CGI-infected popcorn chomping Emmer-escapade in the vein of Geostorm. Which is a shame, really, as firstly you'll likely be disappointed if you came here for some Big Screen world-is-ending disaster effects setpieces and, secondly, you'll likely give this a hard pass if you didn't want a big dumb disaster actioner. Greenland is actually much more similar in terms of tone and scope to the recent indie gem Bushwick, which saw Dave Bautista tackle a gritty 'invasion' landscape on a limited budget. Here Butler is called upon to do a little more acting rather than just running away from 'splosions, with Waugh happy to invest in his characters before he puts them through the wringer.

Butler is called upon to do a little more acting rather than just running away from 'splosions, with Waugh happy to invest in his characters before he puts them through the wringer

John is a hard-working structural engineer who has problems at home, trying to pick up the pieces with his estranged wife Allison, not least to help deal with their son, as they come to terms with his recent diabetes diagnosis and requirement for regular medication to keep him from a coma. When news of a potentially world-devastating comet breaks, things become further complicated with the government plan to cherry-pick those who should survive the apocalypse, leaving John precious time to get his family to the rescue planes, and having to face plenty of disasters along the way as the world turns on itself.

Greenland doesn't re-write the disaster movie rulebook, but it does work wonders on a very modest budget (we're basically talking a quarter of Geostorm's budget), taking its time to build up its core characters - who are presented as refreshingly flawed - and signposting a lot of predictable points of peril along the way but still enjoying putting the viewer in suitably challenging "what would you do?" scenarios, and coming up with twists along the way which keep you interested and invested. For all the obvious points of manufactured tension, there's always a further spanner in the works that you won't see coming, bringing the Noah's Ark formula of 2012 back to earth with a crash, as cold hard decision-making overrules any sense of humanity when mankind is intent on surviving at all costs.

Indeed, if you put them alongside one another, there are so many points of intersection that - at least on paper - Greenland appears to basically be a remake of 2012. But the edge here is that gritty feeling of at least attempted authenticity, with neighbours begging the protagonists to 'take my daughter', and even seemingly normal people happy to do the unthinkable just to get on those damn planes. The horror that unfolds requires considerably less CGI and more acting mettle which, whilst far from pushing Butler's skills (which something like The Vanishing showcased more obviously), makes for a pleasant change of pace from him just hitting everybody in the face. Morena Baccarin (Homeland) is also suitably convincing as his estranged wife, who has to deal with her own impossible situations, whilst Scott Glenn (Daredevil) waits in the wings to do some unsurprising scene-stealing work for his extended cameo role.

Originally set to be a Neil Blomkamp production with Chris Evans in the lead (who, let's face it, still really struggles to break free of his Cap' persona - c.f. Defending Jacob), whilst that may well have ended up being a bigger budget and possibly even better feature, the reality is that it also afforded Waugh and Butler a better-than-normal starting point for their adaptation, clearly working from decent material and thus less prone to lapsing into their more comfortable action formula. Effects are hardly extensive, and are frequently left for just a few shots here and there (the coda seems utterly unnecessary) to set the scene, which works well, although will certainly disappoint those expecting more Emmerich. Basically set your sights on a tense survival drama set against an imminent apocalypse backdrop and you should find Greenland a pleasantly satisfying affair.

Greenland is available on Amazon Prime Video from 5th February 2021.
﻿