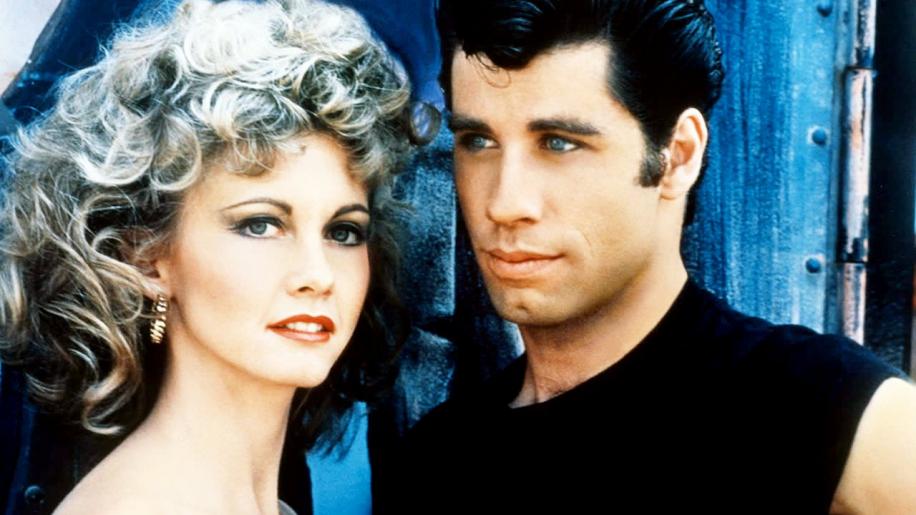 I doubt if many people will recall the buzz created by 'Grease' upon its release in the Cinemas in 1978. It had built up a great reputation on the American circuits and its UK release was a hugely anticipated event. It was one of the few movies, back then, to have a massive PR hype - complete with TV promo spots and 'Making of ...' documentaries. Everyone was talking about it. Its success even made the TV news programmes. It really was the big Summer hit movie of 1978. 'Grease' was the word!

I found it hard to believe that it could possibly be anywhere near as good as the media were making out. After all, it was a musical and I didn't really like musicals. People at work were asking if I'd been to see it yet and those who had forked out for a ticket all had good things to say.
Still cynical, I took myself along to the cinema not really expecting much.
I came away with a smile on my face, for the movie had been such an immense pleasure. Set in the 1950's it was thoroughly entertaining and funny with authentic Rock'n Roll period music, as well as great original numbers such as 'You're the one that I want' which topped the UK charts for weeks on end. Does anyone remember the Arthur Mullard and Hilda Baker cover version? Answers on a postcard please ....

While 'Grease' starred the young John Travolta (fresh from his success in 'Saturday Night Fever'), it was really Olivia Newton John in her American movie debut who caught my interest. She was lovely! Oh, and she could really sing too. Her 'Hopelessly devoted to you' ballad was very reminiscent of Debbie Reynolds in the 'Tammy' movies (look 'em up, you kiddywinks).
Until she donned the skin tight, shiny leggings in the finale of 'Grease', she'd always been the demure, doe eyed country singer who gave us 'On the banks of the Ohio' but little else. 'Grease' really provided a platform for her talents and allowed her to shine.
Over the years the movie has seen several re-releases in the cinema. I saw it on one of those occasions and found that the audience knew the lyrics off by heart and sang along with most of the numbers. You know what, even on seeing it again, it was still a heart lifting experience - a real joy.

Sandy Olsen (Olivia Neutron Bomb) is a goody two shoes from Australia while Danny Zuko (John Travolta) is the head T-Bird from Rydell High School. When the two meet up during the summer, they fall in love. When summer ends, the two think they'll never see each other again, but Sandy's parents decide to stay on in America and she now attends Danny's school. When the two meet up again, Danny has to play it cool in front of his gang and Sandy is hurt by his behaviour. However the two, against all odds, manage to get together but Sandy must decide whether to ditch her Sandra Dee/Doris Day image and join the infamous Pink Ladies or lose her greasy haired guy.

It's a simple enough story, but it works very well in the 1950's era with fun and high jinks at Rydell High as the whole school prepares to take part in the televised 'National Bandstand' dance off contest - hosted by Vince Fontaine, played by none other than Edd Byrnes who became famous in the role of Cooky on '77 Sunset Strip' TV show.
Other characters are played by such 'blasts from the past' as Eve Arden as the Principal, comedian Sid Caesar as Coach Calhoun and heart-throb singer from the 50's Frankie Avalon appears in a dream sequence treatment of the 'Beauty School drop out' musical number.
One of the funniest moments has to be at the dance off contest, when some T-Bird members moon the TV cameras to the accompaniment of 'Blue Moon' and the staff of the local Burger joint recognise their rear views.

The musical numbers are produced to perfection - from the opening title track 'Grease', to the 'Summer Nights' singalong special where the alternative Boy/Girl viewpoints are communicated in song - and a cracker of a song it is too!
Travolta's plaintiff 'Sandy' number sticks in the mind with images of him in the projection beams at the local 'drive-in' movie while the 'Greased Lightnin' big production number is one to really get the toes tapping.
There is such an energy about 'Grease' as well as a youthful enthusiasm from the cast that comes across on screen. Like many Hollywood musicals, it began as a stage show and enjoyed a long run in New York with John Travolta playing a minor character but always coveting the role of Danny Zuko.
There's great chemistry between Ms Newton John and Mr Travolta - and their close harmony works well, particularly in the final few bars of 'Summer Nights' as the camera zooms to a close up on them in a composited shot.
Back in 1978 however, there wasn't such a thing as digital compositing and this shot would have been produced as an optical effect in the film lab. Those were the days when you edited a film on a Steenbeck editing table or Moviola editor, held the film in your hands, cut it up and joined it together with a tape splicer - not on a computer.
It was possible to make mistakes in the process. Some of us may remember a Super 8 collectors print of 'Grease' where Sandy & Danny's positions on screen were reversed by accident.
A rather feeble attempt was made to produce a sequel in the shape of 'Grease 2', but the less said about that one the better. Even Olivia Newton John starring in 'Xanadu' failed to produce the box-office excitement of 'Grease'.
Seeing 'Grease' again brings back many happy memories and after all these years it still holds up as a timeless piece thanks to its period setting. It's the kind of film that we haven't really seen since as the big studios seem to have forgotten how to make them. For me and for many others 'Grease' is still the word!