A flight of fancy? 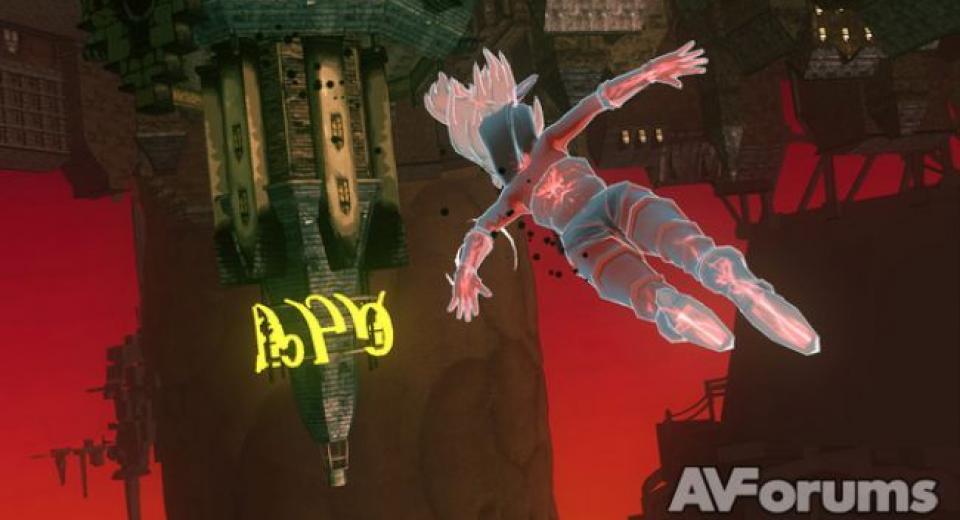 If you've held back on pulling the trigger on buying Sony's latest handheld, the Vita, Gravity Rush could well be the title to pique your interest. It's not a sequel and it doesn't have “it'll do” launch period roughness; a fresh idea and a game you won't be playing on any other format. Coming from SCE Japan, it's just the shot in the arm the console needs.

You control Kat, a girl without any memory of who she is, where she is or what she's doing – it's a typical set-up, discover the world with the character and uncover its mysteries. The floating city you inhabit, Hekseville, is under attack from strange creatures called Nevi that emanate out of a vortex in the sky and your only ally is a black cat. Luckily, this furry little feline bestows upon you the ability to manipulate gravity. The game is essentially an action RPG with the emphasis on exploration. Thanks to the bending of physics you can walk up walls and bridge huge gaps simply by shifting the direction in which gravity will flow. It has a hint of the Portal “where am I” appeal about it, the novelty factor of shaping your path beyond the bounds of normal possibilities, but the atmosphere is far closer to the likes of Ico overall; a careful, delicate narrative embodied by the mixture of innocent characterisations and audio/visual excellence. Luckily, there's similarly capable gameplay lurking underneath as well. Button layout is straightforward and intuitive, the R-trigger controls Kat's use of gravity, a quick press rings up a reticule for aiming in which direction you wish it to flow. You can use either the right thumbstick or the Vita's motion sensor to aim, but a combination of both is probably your best bet, honing in quickly with the thumbstick then shifting the console to get pinpoint accuracy. If you rely on only one or the other you'll either be waving it around like a loon or removing one of the key selling points. Your use of altered gravity is dependant on a gauge that depletes as it is used. Don't worry if you run out as Kat is a pretty resilient lass who can handily crash to earth with nary a bruise.

You're quickly drawn into the story, but its ability to tempt you down the rabbit hole of a fantastical adventure is intrinsically tied to the artistic style. In a sea of so-so titles for the Vita, Gravity Rush is the one instance thus far of a developer pushing for something different, and the visuals are there to grab you. It is, quite simply, beautiful. Quasi-cel-shading helps link to the graphic novel interludes that unravel the narrative, a story that carries with it the atmosphere of a Hayao Miyazaki journey of discovery. The steam-punk-esque industrial city-scape you explore in the early sections fits this perfectly, the grime and earthiness belying an innocence to the way in which we are introduced to the simple characterisations and universal themes – whimsical and charming.

It's not just the in-game visuals, full of stylised touches, that exemplifies the bewitching nature of the game, Gravity Rush is one of those titles that brings with it an almost holistic approach to story-telling. You begin by being asked to tap an apple, dislodging it from a tree which acts as a catalyst for the initial scene-setting cinematic – it hints at the drive to get the player involved in an experience that relies on the delicate balance of motion-controlled interaction and linear story-telling, all of which is heightened exponentially by a score that is absolutely perfect; dancing between scenes of playfulness and adventurous peril. The narrative is told via comic book-style frames complete with speech bubbles, but even that idea – which has been seen many times – has subtleties interwoven. Sliding a finger to get between frames isn't groundbreaking but when mixed with the motion sensor - which angles the perspective through which you view the frame, as if you're peering at a set of layered two-dimensional objects through a window – the result feels incredibly tactile. You'll find yourself moving your Vita about for no discernible reason other than to peer into the screen. The mechanics stick to the fundamentals of an RPG adventure, with gems the in-game currency. There are varieties to boost life force and recharge your gravity gauge. You can take side-quests such as the Challenge missions in which you collect precious gems which are used to repair things around the city as well as for levelling up your abilities. Once you get used to the concept of changing your path with the aid of your special skill, the naysayers - for whom atmosphere isn't of paramount importance - will likely find a game underneath that is actually pretty linear. But to view it in those terms would be entirely missing the point of a title such as Gravity Rush – you have to throw yourself in head-first, literally!

The real joy is not just in the layers of a solid action RPG but in the core fundamentals of exploration. Gravity Rush seems almost tailored towards those who felt a pang of disappointment when they had to leave a good sandbox area in Portal or the Crackdown player who spent more time bouncing from rooftop to rooftop than progressing the story. RPG fans know the value of immersing themselves in an environment and allowing an emergent narrative to develop, and that imagination is put to good use here. The art direction is such that you should want to see more rather than skip from location to location as the crow (or Kat) flies.

The first time you take note of the underside of the city is a mini-revelation, there are angles and pipes to fly past, through and eventually nestle on, like being thrown into an MC Escher sketch. Early on you'll be happy enough to explore, taking your time aiming for the right rooftop and finding precious gems, but as you acclimatise yourself to the speed of free-fall and taking note of the direction Kat's hair falls (an indication where the true gravitational direction points) how you travel becomes equally as important. Pinging across the rooftops, skidding past the scenic architecture and billowing smog is all about feeling the flow of speed and the empowerment of unimpeded, fluid motion. The missions are of a familiar ilk, fight enemies, race around, beat a boss and repeat. The developers struggle to add much variety, but when the fundamentals are as slick as they are here there's arguably little need. The action is a touch rough, evading attacks with a swipe on the screen never feels as intuitive as it should. Enemy AI is perfunctory, attack patterns are very old-school and the glowing orbs flashing on their bodies don't even need an explanation as their glaring weak spot. However, the core attack of a gravity kick which can send you whizzing across the screen like a pinball helps the combat keep pace with the rest of the game's fluidity. The game's uncomplicated nature is one of intentional design rather than inadequacy, an intrinsic part of its charisma.

Gravity Rush is a package, swelled by the novelty of playing with physics and allowing you to fly, but not wholly defined by it. It's chock full of charm and wears its simplicity as a badge of honour. It's almost a throwback of a title, SCE Japan have distilled the elements of an action RPG down to its base components but wrapped it in a package of addictive exploration with a stunning artistic flourish.