A masterful exercise in pure suspense and relentless tension 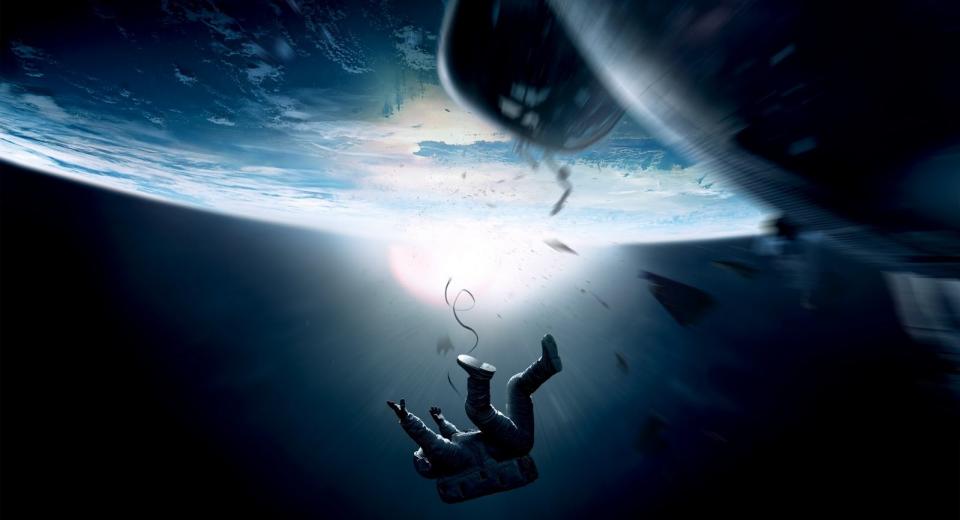 Director Alfonso Cuaron's Gravity is a powerful and blisteringly accurate disaster movie set in the dead of space.

Not only can no one hear you scream but they also can't hear the high-speed bullet-like impact of debris tearing through your ship and leaving you stranded in the great abyssal vacuum. Cuaron's powerful use of sound - or lack thereof - coupled with an impassioned score, only heightens the near-unbearable tension, whilst acclaimed cinematographer Emmanuel Lubezki provides us with some stunning images, both of the earth from space, and of hardware disintegrating into a million tiny Lego-like pieces. There's also several effective unsubtle-but-not-intrusive symbolic touches, including a rebirth cycle ignited by a beautiful Zero-G foetal coil.
Basically a one-(wo)man show, with Clooney on hand for a surprisingly powerful extended cameo, Gravity marks a great role for Bullock, who arguably equals her fantastic career-high Blind Side performance with a strong-yet-vulnerable effort here as an astronaut left stranded in space with little oxygen, few supplies, dwindling fuel and no communication with Mission Control back on Earth. The survival structure of the story pushes Bullock to her limits, evidencing both a mental and physical strain to the seemingly endless catastrophes that befall her character.
Yet it is still a tribute to the unquestionable skill of the director that he is able to not only draw such performances out of his cast – who were, originally, Natalie Portman and Robert Downey Jr. – but also quite so much tension out of such a minimalistic, realistic setting and story, blowing similar but more conventionally Oscar-worthy efforts like Apollo 13 out of the atmosphere with its ground-breaking depiction of an against-the-clock space disaster. Worth the production delays and extended wait to get the film fully rendered in 3D, this is one of the best - again, if not the best - examples of the technology since the format's introduction with the benchmark-setting Avatar. As with Cameron's spectacle, Gravity is so dominated by CG effects that the 3D works, providing it with a genuinely immersive quality which (besides Avatar) is likely unparalleled in previous uses of the format. Not only do we get all those trademark reach-out-and-touch-it moments that viewers appear to have a love/hate relationship with, but the 3D brings life to a place most of us are utterly unfamiliar with: truly affording us a glimpse at the bottomless depth of space. It's also probably the first time any of us have seen space-side views of the Earth where the landscape takes on a tangible texture, with mountain ranges and plateaus giving an extra dimension to the previously 'flat' globe.

Above all, though, the 3D cinematography draws you into the intense claustrophobia and suffocating environment, marrying 1st and 3rd person shots seamlessly, delivering a feature which is almost like a 90-minute version of the epic car-assault tracking-shot in Cuaron's Children of Men (where the camera pans in and out and around the car in one long take, as it is shot at and attacked), and which is unrelenting in its tension, leaving you literally holding your breath to see what happens next.

It’s only fitting then, that Warner’s two outstanding video presentations are exceptional, sheer picture perfect majesty. First up there’s the 1080p/MVC-encoded 3D presentation, and then there’s it’s 1080p/AVC-encoded 2D twin brother – both framed in the movie’s original theatrical aspect ratio of 2.4:1 widescreen – and, honestly, you’d be hard-pushed to find two finer looking video presentations in the charts at the moment. They are strong contenders for the new benchmark standard, boasting stunning detail and exceptional clarity, resounding precision across the field of depth, from the close-ups on skin textures to the authentic space suits and intricately-perfected station setting. The colour scheme is rich and vibrant, despite its obvious limitations, and black levels allow for rich space sequences – the best you will have ever seen. All this with no signs whatsoever of any digital defects, DNR over-application, edge enhancement, banding or blocking. Simply perfect.


As with Dredd 3D – Gravity is one of a handful of films that you simply must see in 3D.

The sound design on Gravity is also outstanding, eschewing the standard intentional cinematic ‘flourishes’ of most space-bound features – which almost universally rely on space sound to drive home the effect, even though there would be almost no sound – and instead relying on precision moments and a stunning score to drive the piece. Both versions of Gravity come with identical DTS-HD Master Audio 5.1 tracks which are exceptional examples on the format.

Dialogue is extremely limited in this feature, but every word, every breath comes across clearly, as if you were trapped in the same space suit as the characters. It’s this first person perspective that comes across as much in the sound design as in the visuals, with LFE reverberations rocking you throughout the various debris assaults; the surrounds crafting a veritable sonic minefield for you as you desperately claw your way to safety. The breaths intensify; the characters are knocked and buffeted across the screen, and, all the while, the impassioned score ignites the piece, focusing the tension and channelling the emotions. The hefty, comprehensive Documentary – Gravity: Mission Control – runs a good quarter-hour longer than the main feature itself and is split into 9 sub-sections, covering every element in the production of the movie, from the story, scope and space-setting to the casting, shooting in space and scoring space.

Over half an hour of further Shot Breakdowns supplant the main Documentary, split into 5 Featurettes all approximately 7 minutes in length, and looking specifically at the VFX utilised in several key sequences.

Alfonso Cuaron’s son, Jonas Cuaron (Gravity’s co-writer), shot this intriguing 10-minute Short Film as a sort-of accompaniment to the main feature and, although it is largely unnecessary, it is still well worth checking out.

The disc is rounded off by another worthy extra, the 22-minute Collision Point: The Race to Clean Up Space, which is a Featurette hosted by Ed Harris looking at the real-life issue of flying space debris.


Matching up to the US counterpart, we get the same comprehensive selection of excellent extras.

Is Gravity 3D Blu-ray Worth Buying

Easily one of the best – if not the best – films of 2013, if you only watched one movie at the cinema last year, it should have been this (and you were given every opportunity, with its Oscar-run-up-fuelled return to the cinemas earlier this year). If you ignored the recommendation, then now’s the time to fix that mistake, and Warner’s UK Region Free 3D Blu-ray release is just about as good as it gets outside of the theatre, with outstanding 3D and 2D presentations, exceptional audio, and a comprehensive selection of extras.

The year’s barely begun and yet Gravity has already earned a top spot amidst 2014's best Blu-ray releases.