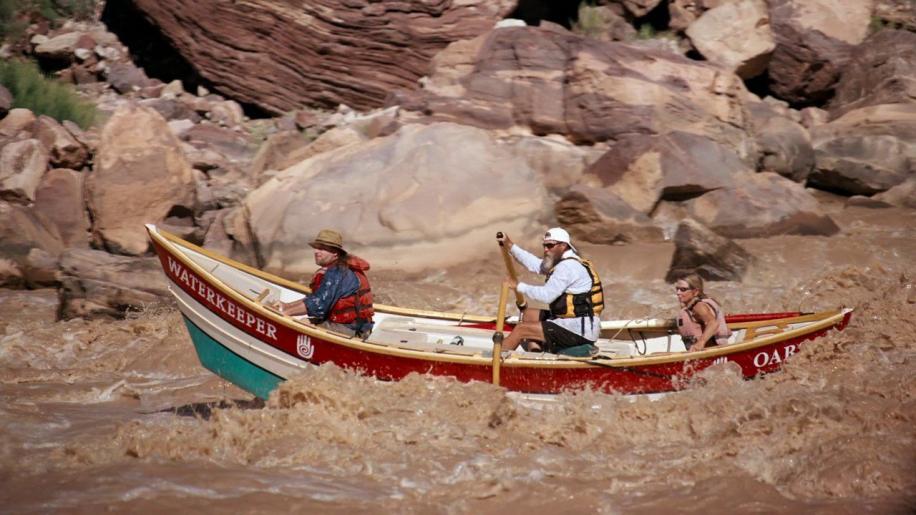 Did you know that the amount of water around now has not significantly changed since the Earth was first formed? That means there is the same amount of water now as there was during the age of the dinosaurs, or when life itself first evolved some three billion years ago. Makes you think doesn’t it? It also kind of mocks the idea of conservationists harping on about saving water, because basically the amount of water isn’t changing, it never has and it never will; it will just continue on its endless cycle. Of course, that is a misnomer, it is the amount of free, usable water that appears to be running out – as stated it’s not, but the course of where the water is, i.e. where we need it, is changing, thus it appears we are getting less. As such conservation techniques are a good idea, as it’s a cheaper alternative to uprooting civilisations to move with the water – this has never worked in the past, just ask the Mayans, oh wait you can’t ....

To highlight this idea, director Greg MacGillivray and his IMAX team decided to follow author and anthropologist Wade Davis and his fellow conservationists, daughter Tara, Robert F. Kennedy, Jr., his daughter Kick and their river guide Shana Watahomigie, of the Havasupi tribe, and the first Native American Indian to become a ranger, as they navigate the great Colorado River through the Grand Canyon. The piece predictably starts off with the usual global warming threat of diminishing water supplies, glacial melting etc. but it’s never heavy-handed, and once you get into the river itself, with the graphical representation of the shrinkage of Lake Chad, the bleaching of the canyon sides showing exactly where the river used to be, you really start to gauge how much water is no longer there. Several ideas are put forward for the reasons behind the reduction in water (all true) from the Hoover Dam to reduced rain-waters, global warming and supply to human population centres with particular emphasis on the growing requirements of Las Vegas. But perhaps the most telling is the image of the river’s Mexican delta, which was once thriving and is now barely a trickle. By also telling the story from an historical perspective; the group find several sites first photographed, in 3D no less, by John Wesley Powell in 1872, over lay them and discover exactly how the river has changed over the last one hundred and forty years, it presents another sobering image.

Thankfully though, the film maintains an even keel and never becomes too preachy, but punctuates the startling imagery with stark reminders and facts about the river and its water supply. Because it is the river, and the canyon itself, that is the real star of the show. MacGillivray frames every picture with an eye on detail, there is a clear fore, middle and background, and when looking over the canyon itself it is truly stunning. The 3D depth really opens up the field of view and it is exactly how it should be employed – there is no ‘point at the screen’ imagery, just depth, depth, depth. Overhead helicopter shots of the Hoover Dam, or the meandering river, the canyon sides, or the sheer expanse of it all are breathtaking; it is almost like being there and far, far superior to anything that 2D can promote. The whole film is overlaid with music from the Dave Mathews Band, each section being given its own theme, it’s not intrusive but it is constant, so if you don’t like the music, then you might be turned off the picture itself – personally I found it added to the visuals.

Being far more than a show case for 3D, or an historical or environmental warning, Grand Canyon Adventures manages to effortlessly combine all these elements and still give you something to think about, overlaying, as it does, some conservation tips during the credits. With a perfect meld of picture and sound, this live action 3D film is a wonder to be seen, even if the film itself isn’t to your personal taste.