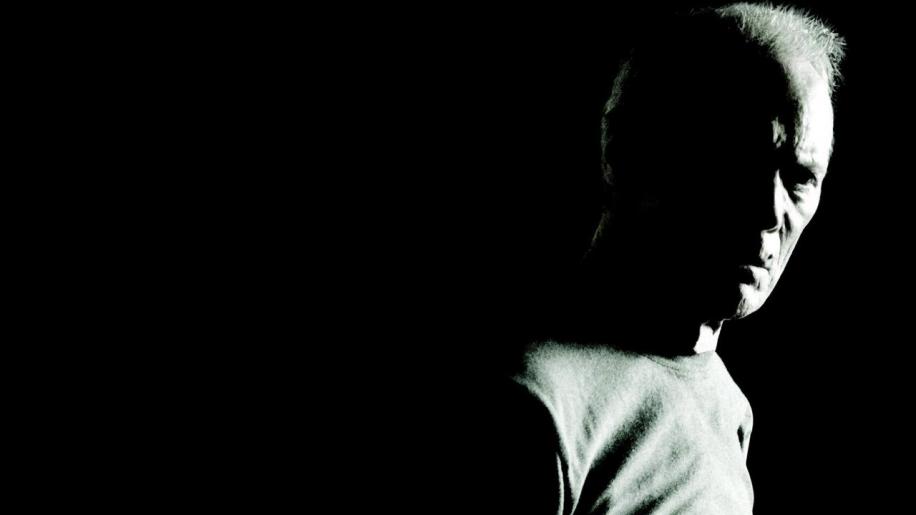 I miss Dirty Harry. I miss The Man with No Name. I basically miss Clint Eastwood's usual on-screen persona, the tough-as-nails, gruff-voiced lone warrior who - more often than not - is forced to reign down fire upon all those who cause him strife. He has been doing it for several decades, I guess I just figured he would do it until the day he died. Over the last few years, however, his focus has clearly been more behind the camera than in front of it - and the reward for us has been quite rich really, a plethora of strong, powerful tales shot in his trademark moody minimalist style, which allows you to focus more on the characters than the MTV images this generation is used to. With the harrowing Million Dollar Baby and the haunting Mystic River, as well as that World War II double-header that I haven't even gotten around to watching yet, the man just does not stop. Who can complain really if Dirty Harry is long gone? If he is not as prolific a star anymore (he has not acted in a movie in nearly five years, and has not had a lead role for nearly twice that) then he more than makes up for it by directing some seriously acclaimed work. But I still missed Eastwood, the actor. I still missed Harry Callaghan.

“Ever notice how you come across somebody once in a while you shouldn't have f****d with? That's me.”

Then I heard about Gran Torino, the star's return to the Big Screen, its poster denoting a angry-looking Eastwood scowling as his hands clench around a rifle, the trailer later showcasing an angry Eastwood getting mad with his Asian neighbours, in particular a wayward son who takes a shine to the old man's prized '72 Gran Torino muscle car, with plenty of scowling, stand-offs and drama. Of course, the plot would have them become reluctant friends, with plenty of growling, bickering, addressing of prejudices, and confrontations along the way. It looked like a quiet little movie for him to come back to our screens with. A quiet movie with a very loud rifle. Little did I know that the end result would be such a moving, powerful tale, and one which truly bookmarks this legend's mammoth career as an actor, if this is indeed the last time we are going to see him grace our screens.

Walt Kowalski is a bitter old man, a Polish-descended Korean War veteran, disgruntled with his life, his family, and the ever-changing world around him - not least the very neighbourhood he is living in, which is being slowly changed into something of an Asian gang ghetto. Recently widowed, his sons (and their respective families) despise his abrasive, unforgiving nature, his say-it-as-it-is attitude and venomous words, seeing him as little as possible and regarding even that little contact as more of an obligation or chore - a securing of inheritance - rather than an act of familial love. His nasty, destructive and stubborn nature turning away all those around him, he is likely to die alone, nursing a beer in his spotless and well-kept small house. But when the teenage son of his much-hated Hmong neighbours is forced - as a gang initiation - to try and steal his prized classic Gran Torino, which he has kept in mint condition since he helped bring it off the production line, Kowalski gets his rifle and defends his property. But through a twist of fate, he ends up helping the boy and earning the respect of the family. Forming a reluctant bond with his neighbours, slowly this bitter, bigoted old man's prejudices are eaten away at, as he finds himself strangely coming to like these people. But will Kowalski be able to help him avoid the grasps of the local gang, eager to draw him into their fold?

On the face of it, this seems like a fairly predictable, familiar plot - aged war veteran embittered by the past and blinkered to the changes that have overtaken him over the years takes offence with a disrespectful youth, but through increasingly less painful interaction finds some kind of mutual respect and friendship which broadens his narrow views and almost gives him a new lease of life, whilst also giving the youth something of a role model and purpose in life. It could almost be described as a feel-good drama for all ages, were this to be the true narrative for Gran Torino, but it is not. Eastwood has learned a lot over the years, and if his trademark filmmaking style often involves poorly-lit, darkened shots, then his trademark stories of late - mostly in the Director's chair - have been correspondingly dark. On paper, Million Dollar Baby was a bit of a 'Rocky' style story about a promising young woman boxer with the potential to be a champ, but in reality it was far from this. Similarly Mystic River could have been a simple whodunit, but Eastwood chose instead to make his characters more ambiguous, and his outcomes even more so. Whilst Gran Torino has the starting block of a simple, feel-good affair, and was even pitched as something like that in the trailers, the end result is far from simple, and far from sugary sweet.

If anything, I was slightly annoyed by the trailers and film previews, even the blurb describing the plot to this film pitches it in a way that I found did not ring true when it came to watching the end result. Whilst this is a movie about the final act in the life of the all-but-dead character of Kowalski, mainly thanks to his interaction with his Korean neighbours, far too much emphasis was placed on the relationship between him and the young boy who tries to steal his beloved car. In actual fact, I think that this aspect of the plot IS fairly predictable, and almost a necessary backbone to what is more a story about his slow respect for the family's forthright daughter, who won't bend and sway to Kowalski's influence in the same way that the young boy does, eventually. His scenes with the girl are correspondingly much more interesting, more compelling, and ultimately prove to be far more integral to the plot and development of his character. Still, his scenes with the wayward son do even get their own montage, so perhaps it is more obvious a story arc to promote, and at the very least this mislabelling works well to disguise this movie as being simple and then surprise the viewer with how deep, insightful and complex the character study really is.

And Eastwood still has some serious acting chops, even at a staggering 78. He may not quite have the speed he managed to retain well beyond expectations, but he definitely has that ferocity that has made him famous, that look in his eyes that would make even the most carefree criminal youth think twice before crossing him. The scenes where he wards off the various gang members echo sentiments of both Unforgiven and Dirty Harry, and more than pay homage to his trademark threats - here he mockingly aims at the various punks with his hand, in the shape of a gun, before following through after the seemingly innocuous gestures. But whilst it is reassuring to see that he still packs some serious punch, the really well played scenes come between him and his estranged family, between him and his neighbours and him and his priest. He murmurs to himself in that familiar, intolerant way, distancing his own family to the point where they are not even close enough to him for him to tell them the truth about his health problems. Correspondingly, he happily drops his prejudices and bigotry - not through argument with his neighbours, but through simple resignation to the fact that he is just plain wrong about some things. A prime example is their food, which he turns his nose up at because of unjustified prejudice, but after tasting it he soon changes his mind - and the next thing we see is him sitting in the kitchen with all the older women in the family (who don't even speak the same language as him), happily chomping on the delectable dishes. It is a simple, honest way of allowing the audience to get to know, and even grow to like, this grizzly, bitter old man. And rather than label this man as the disgruntled war vet from the outset, Eastwood allows us to slowly see the truth behind the horrors that he has seen in Korea, the horrors that he has participated in. His carefully enunciated words to his late wife's priest elucidate it all without the need for a big song and dance.

“The thing that haunts a guy is the stuff he wasn't ordered to do.”

Whilst Eastwood may be the only familiar face on board for this production (aside from perhaps some of the actors who briefly appear as his family members), that is not to say that the large selection of Korean actors that he brought in to play the neighbouring family and gang members deserve any less praise. In fact, real kudos should go to the almost total newcomer girl who has to stand up to (and does, successfully) the big man himself. More her film than Bee Vang, who plays her younger, wayward brother fairly predictably, Ahney Her shows real promise for the future. But this is a drama more about characters than actors, and so authentic are some of the others that it is difficult to tell which of them are acting and which of them are just being themselves. The old grandmother who sits on the porch adjacent to Kowalski's and engages in a battle of gestures with him that crosses all language barriers, could have easily been told to just sit there and look permanently disdained by his presence. It's a nothing role, a cameo part, but it is this kind of offering that rounds out a quality movie indeed.

Occasionally heart-warming, sometimes even funny, and often tense and dramatic, Gran Torino is a superb way for Eastwood to round out his career. But it would not be a proper last-decade Eastwood vehicle without some seriously bleak moments, and quite a dark and oppressive undercurrent. Those who watch it are likely to be both moved and affected by the power and resonance of this character-driven tale and I cannot recommend it highly enough.