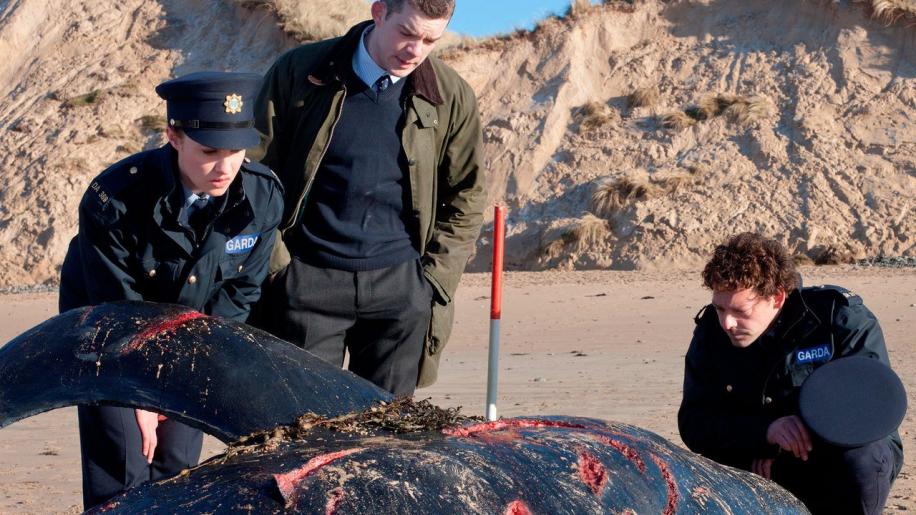 Erin Island is under attack… and the locals are having a lock in!

I wanted to hate this film, a low budget comedy horror set in Father Ted’s Ireland and featuring a cast of largely drunk Irish, what could be worse? The honest truth is that this is actually a really good comedy horror, well made by a great team and based upon an original script. Whoever decided to give this only a limited cinema release – at least in the UK, needs their legs slapped!

The blurb accompanying the disc speaks of a blood-curdling booze soaked horror. This is overplaying the horror aspect somewhat, but probably not the booze. This film really should have been sponsored by the Irish drinks industry as the plot does revolve around keeping one’s blood alcohol level above the point at which the monsters find you palatable. The horror, body count and general stomach turning gore is all pretty low, although the big scary monster and its offspring more than make up for it.

To the plot: Erin Island is a small community just off the coast of Ireland. In true Father Ted style, nothing ever happens there. Its key sources of income are tourism and fishing while the pub stands as the focal point of the community. It is festival time on the main land, so most of the population has headed off on the ferry, just as rookie Garda Lisa Nolan (Ruth Bradley) arrives as holiday relief. She is met off the boat by fellow police officer Ciaran O’Shea (Richard Coyle), who could not be more different to her. He is a heavy drinking, unkempt laconic sort of fellow, who does not take his job very seriously, because frankly there is never anything to do except lock up the occasional drunk or sort out the closing time fights. Lisa on the other hand is a bright young thing, looking for early promotion and sees the two week relief placement as a career opportunity. Sometime the day before, a fishing boat had witnessed some sort of shooting star and had gone to investigate. All of the crew have mysteriously gone missing without a trace, but a tragic accident at sea is the assumed cause.

We therefore have an almost empty island, a fairly stereotypical police buddy team and a mystery to solve, so far, so good. Along the way we have discovered that O’Shea is an alcoholic, Lisa is totally focussed on her work and sees O’Shea as just another drunk failure and that the ferry just about has room for passengers amongst the crates of booze it must be laden with, judging by how much everyone except Lisa drinks.

Over the next few hours, more deaths occur, some quite gruesome and pretty much all with comedic overtones. The size and general characteristics of the monster are revealed – although to be honest the title of the movie gives at least some of this away, and the rest of the key characters are introduced. Dr Adam Smith is some sort of marine biologist – we don’t really get to know exactly what, but it is to him the Garda turn. He is very English and treats his Irish hosts as slightly simple, although his patronising attitude is universally ignored. Personally, I would have thumped him. Island Doctor Jim Gleeson (Pascal Scott) is brought in to examine the human remains, such as they are, but there is not a lot he can tell from just a severed head. Brian Maher (David Pearce) is the miserable landlord, along with his suspicious wife Una (Bronagh Gallagher). Fisherman and only survivor of the early attacks is Paddy Barrett (Lalor Roddy). He wants to get rid of the threat as much as the next man, so long as he does not have to do it himself. All very stereotypical really, and if this was not the Irish taking the mick out of themselves, we might all feel a little offended. Of the monsters, I shall reveal few details, but suffice to say there are a few of them, they have spawned and things are looking bad for the remaining islanders, particularly with a storm on the way.

Between the team, they work out that alcohol poisons the monster and also that it drinks blood. Therefore, all they need to do to survive is to get drunk. The monster cannot tolerate its prey once well-oiled and makes no attempt to ingest them. The issue is then how to destroy the creature when they are so drunk they can hardly stand and even the power of speech is deserting them. Up to the stand comes O’Shea. He volunteers to remain sober while his compatriots do what they do best and attempt to drink the island dry. It’s a shame that a few lightweights cannot hold their beer and become easy pickings, but what’s a few decapitations between friends? With the whole village holed up in the pub, O’Shea and for the first time in her life, moronically drunk Lisa are all that stand between them and the twenty-three tentacled terror from the deep. There are also its only slightly less lethal offspring to cope with and a storm has blown in, cutting the island off from the mainland. All we can hope is that the hooch will hold out until the morning. The finale is great fun, with some good stunts and humorous dialogue. There are a couple of cliff hangers as the scenes play out to build the tension, but it has not fallen into the trap of being over long.

The relatively small and for the most part Irish cast play a blinder, keeping up the tension even through the comedy. Writer Kevin Lehane has found a clever storyline from very simplistic origins and director Jon Wright has made a good job of translating the story. Lehane admits that the idea came from being bitten by a mosquito while drunk and hoping it would become equally sozzled and suffer the same hangover. He has a good grasp of Irish culture, so can poke fun without it going over the top. Richard Coyle is not Irish, or even Welsh, as many people believe, but from Sheffield. This had let to a few accent issues and he does not do either the broad Dublin or softer Southern dialect very well at all. This does not really matter, as the Garda recruits from all over the place, so who’s to say he is natural Irish anyway? Thank God the pub was modelled on a real location and thus looks like a proper, slightly seedy country hostelry and not an Irish theme pub. Very little Guinness is served and the folk band has been substituted for an old juke box. Just as I remember from my times in the Emerald Isles.

I really am trying to give very little away in this review, as the film really deserves to be viewed without spoilers. Suffice to say the monsters are very good, considering the budget, being a combination of practical and CGI and much of the humour is derived from subtle mickey taking of other films as well. References to Jaws, Alien, Gremlins and many others can be found, while the story remains fresh and fun. The language is fruity, but not excessively so. No doubt a TV cut will follow, as this film should do well on the small screen. In fact, I can see this movie developing something of a cult following and potentially a sequel, as the way has been left open.

If you like your horror films full of feeble minded woman screaming, gallons of blood soaking through the screen and ripping, gratuitous deaths, look elsewhere. This is a comedy film with scary overtones, an intelligent script and good performances. It is still frightening in places and with a few shocks to make you jump, but the violence is more sophisticated on the whole. It feels like a much more expensive film than the reported £4Million price tag, with the post production and special effects competing with the sound design for top honours. The pace is pretty good, ripping along at a fair old rate, although some sections feel a little hurried and the low budget does show through in terms of the expansiveness of the locations at times. The young(ish) filmmaking team have managed to preserve the intensity of the movie and it really does not have any low points in terms of action. The editing is crisp and the continuity generally very good.

This is one of the best low budget horror flicks of recent times and in fact is one of the better monster genre movies in general. For those wanting a mildly scary, enjoyable few hours, you could do much worse than this release.