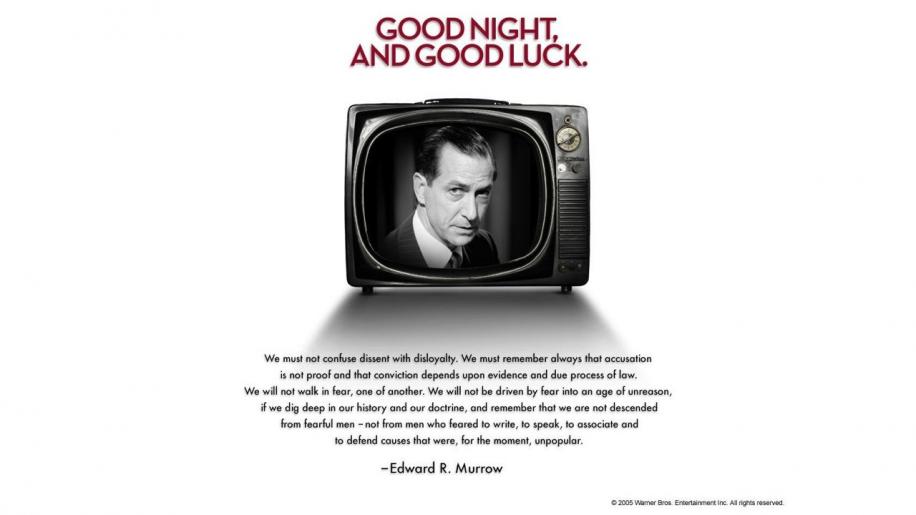 Good Night, and Good Luck is presented in a 1.78:1 aspect ratio anamorphically enhanced widescreen, in its original black and white format. The detail is generally very good, even on the facial close-ups, with clarity throughout and limited softness. There is a little grain and some edge enhancement, but nothing that will significantly affect your viewing pleasure. The palette is obviously restricted by its monochrome format but that certainly gives it an authentic fifties look and works well in portraying a subject matter that is anything but black and white. Blacks are superbly deep and solid and overall the transfer exhibits no print defects whatsoever. It should be noted that I am reviewing the footage shot for the movie itself and not the original news footage interspliced into the production to showcase the real McCarthy - this fifties footage is obviously poorer in terms of quality and does reveal plenty of print defects and glitches. We get a solid Dolby Digital 5.1 soundtrack to accompany this piece. The dialogue is presented at the forefront - whether the slightly restricted original film footage which sounds a little tinny or that from the actors - and only the crowds tend to grace the surrounds. There are few effects to really speak of, you have to really look at the subtle observations of things like Clooney's zippo, doors shutting and people shuffling around in order to hear the surrounds in action. There is also no score to speak to, totally in line with the documentary-style of the production, but there are a few nice song tracks (often live performances) which really offer some all-encompassing aural pleasure through your sound system. It's not exactly the kind of movie that is likely to have a wild, exemplary audio track and this presentation is totally expected and totally acceptable for it. First up we get an Audio Commentary with the Director, Screenwriter and Co-star George Clooney, who is accompanied by the Producer and Screenwriter Grant Heslov. It is quite an entertaining, amusing offering, with Clooney often semi-sarcastic about his own work - joking about how David Strathairn was the cheapest actor for the part, how he was only in the movie to improve its sexiness and so forth. Irrespective of this fooling-around, there are some nice comments on the technical aspects behind the production as well as plenty of relevant facts about the real history of this era. Clooney explains how he got involved in the production (because his father was an anchorman and idolised Murrow), how most of the live words by Murrow were his own and talks about his choice in using the real McCarthy via old footage rather than have an actor play him (although ironically test audiences were stupid enough to comment on how the actor 'playing' McCarthy was too hammy - naïve to the fact that it was the real man himself!) and overall it is an interesting listen.

The Good Night, and Good Luck Companion Piece is fifteen minutes' long and is basically a Behind the Scenes Documentary. With the main cast and crew (including Clooney himself) talking about how they put the production together and how they consulted the real-life individuals in order to ensure authenticity. We even get interview clips with these men and their wives, discussing their important work. This is a revealing and informative Featurette that has plenty of extra information to offer (including brief comparisons between Clooney's own fight to tell controversial tales and Murrow's work - although I think they are only very loosely similar).

Finally we get the movie's Theatrical Trailer to round off the disc. Good Night, and Good Luck is a clever, politically charged drama about an important time in American history that not everyone is au fait with (even in America itself). With its topical implications and standout performances, it marks another superb effort from Clooney both in front of and behind the camera. The video and audio suffer slightly because of the original news footage that was used, but are still generally good and the interesting extras offer even further insight into not only the movie but also the era itself. Well worth your time if you can handle something less viscerally and more mentally entertaining.