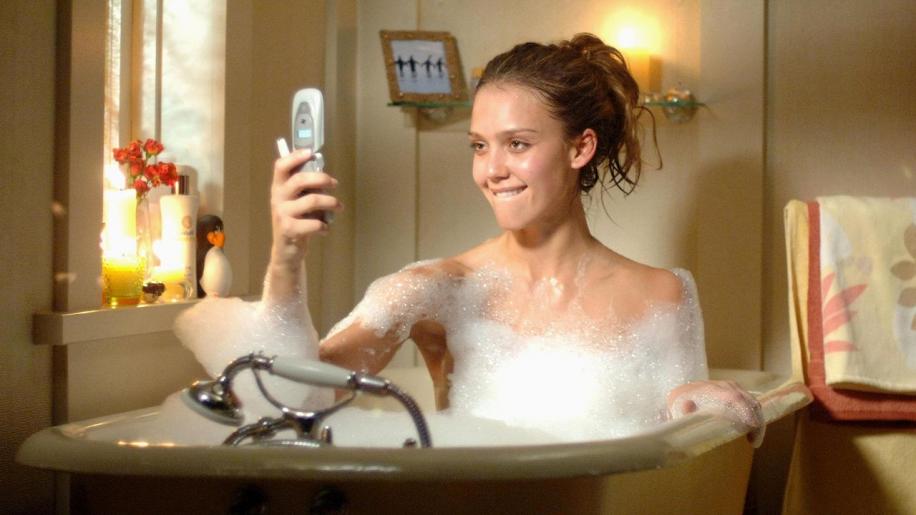 They say hell hath no fury like a woman scorned. Well I would guess that anyone who's had experience of such an unfortunate encounter would certainly have an interesting story of sorts to tell. Possibly even a funny one? Chuck Logan (Dane Cook) certainly has a story to share with us all in what is described as a hilarious comedy. I'm not so sure hilarious or comedy would best describe this movie but anyway, so begins the story of Good Luck Chuck.


A 10 year Charlie Logan and childhood friends play an innocent game of spin the bottle. When it comes to Chuck's turn to take part, the bottle stops pointing at a young gothic chick by the name of Anisha Carpenter. Not quite being his cup of tea, the look suddenly drains from his face and he develops seriously cold feet. What was intended to be 10mins of fun in the cupboard suddenly turns into a very brief, uncomfortable and not-so sexual encounter. Needless to say the whole thing goes disastrously wrong and ends up with Anisha “hexing” (bestowing a curse) upon Chuck. He is cursed to never meet a true love and anyone that he does will always go onto marry the next guy that they go out with after sleeping with him. It all becomes a case of “next please” and the girls only ever use Chuck as a lucky charm in order to marry the real man of their dreams.

Well, seeing as this film is generally touted as being a hilarious comedy with a bit of romance thrown in for good measure, the shallow storyline could be forgiven if the film actually delivered what it says on the tin. However, what is difficult to fathom throughout the course of the movie is that there is in fact very little romance on offer and even more strangely precious little by way of standout comedy ? The level of humour throughout is at quite a banal level and concentrates solely on the raunchier side of things. The wit and intellect remain unchallenged with the jokes and gags on offer simply being a rehash of what we have seen far too commonly before. Worse still, it's also been done far, far better than what Chuck has thrown up on this occasion. Think of Wedding Crashers but turn the humour level 5 notches down and turn the sexual content 5 notches up in order to compensate.

In actual fact 20mins into the movie it had me seriously scratching my head as to which audience this film was actually meant to appeal to? It's an unrated cut and the whole film is full of teenage sexual innuendos from a very male perspective. Yet, quite bemusingly the crux of the story is meant to be a sloppy romantic one? Add into the mix a huddle of penguins for some bizarre reason and you've certainly got a rather strange concoction on offer. There is a definite identity problem here and the film suffers from it. It's not a romantic comedy at all.

The video is encoded as an AVC MPEG 4 codec and filmed in a 1.78.1 ratio with a feature length of 1hr 41mins. There is plenty of detail on offer though occasionally there is a little evidence of edge enhancement. Colours are extremely rich, bold and saturated with no hint of grain. Flesh tones can look slightly over hue in tone as a result. The black levels hold respectable depth and provide plenty of contrast throughout the movie. Whilst the film couldn't remotely be considered a masterpiece, it has nevertheless been shot fairly well and very cleanly. The transfer has held firm with no visibly apparent glitches. The transfer of the film on the whole is excellent.


The disc comes equipped with a Dolby Digital 7.1 PCM uncompressed soundtrack on board as well as a 5.1 Dolby Digital Surround EX down mix. Unfortunately I couldn't take advantage of the full 7.1 on this occasion due to my set up and had to use the 5.1 EX instead. The audio is a 48 KHz affair and the soundstage was very clear and concise with perfectly crisp and clear dialogue. It's fair to say the virtues of a movie of this ilk are unlikely to be saved by the soundtrack alone. There is though, enough evidence on offer to suggest that quite a decent effort has been put into the down-mix. The inclusion of 7.1 is testament to this. The sound steering via 5.1 EX is sharp, precise and well placed. Rear effects are used on fairly regular occasion. They don't amount to much overall but a good ambience is maintained throughout especially at times of montage or music. Though as I've said before, a movie of this ilk has very little to add in the two centre rear channels for the 7.1 to be much of a feature to listen out for.

Back to the movie......roll on 25 years and Chuck is now a successful dentist and works in a practice nearside his lifelong school buddy Stu Kaminsky (Dan Fogler) who runs a Breast Transplant Studio. Invariably as per his curse dictates, Chuck gets dumped by his girlfriend and gets invited to the wedding of his previous ex. By now the rumour of his lucky charm bedding tactics spreads amongst all the available women like wildfire. He's one hot date if you're looking to get married girls! Though for Chuck, what is meant to be an unlucky charm does indeed have some merits. I think all the guys know what I'm talking about here, he has a gift for womankind and Stu wastes no time in convincing him that he uses it liberally. You can imagine the sexploits that follow, the encounters with women of all sorts shapes and sizes, the level of humour involved. He eventually hooks up with Cam Wexler (Jessica Alba) who he met at the wedding and he falls for her hook, line and sinker.

Now I'll be quite honest, I don't know much about this guy Dane Cook apart from Employee of the Month. After this latest movie the argument to lookout for him in the future appears to have become quite an uncompelling one. Maybe he represents the new age Hollywood comedian that plays a straight laced guy that doesn't crack any jokes? He's certainly no Ben Stiller, no Vince Vaughn, no Adam Sandler no Owen Wilson. He's known as a stand up comic though I'm afraid he's not much of anything on this showing. Dane Cook plays Chuck Logan as wooden as a wooden spatula could be and as transparent as a piece of taut cling film. He doesn't even look funny in the slightest. I mean if you land such a part and you can't be funny then surely at least you can try to look funny?

Step in Dan Fogler who as Stu Kaminsky single handedly carries the humour throughout the movie. It could be said that he is probably one of the saving graces of this film, not that, that amounts to much. The other is Jessica Alba. I'd be being generous to say that she can truly act; her talents are never quite as much. Though to her credit she does play Cam Wexler; a goofy, catastrophe prone penguin zoo keeper as best as she can. It's painful to watch but then the viewing is made pleasurable in other ways. Eye candy Jessica Alba certainly is.

The only story that remains is how Chuck goes about ridding himself of his curse in order not to possibly risk losing Cam Wexler to the next guy. What he really should have been worried about was that all those penguins in the film had as much chance, if not more so than him of p-p-p-picking her up. Now that really would have been funny.