Gone with the Wind Movie Review 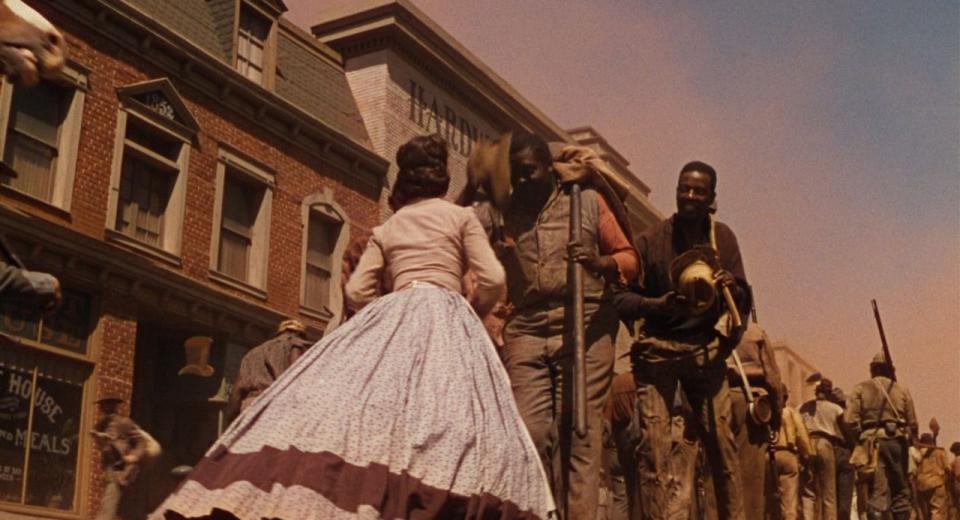 There was a land of Cavaliers and Cotton Fields called the Old South...

Here in this pretty world Gallantry took its last bow... Here was the last ever to be seen of Knights and their Ladies Fair, of Master and of Slave... Look for it only in books, for it is no more than a dream remembered. A Civilisation gone with the wind...

The longest American sound film made at the time, the most Oscar wins for any one film, the first win for the newly-created colour category of Academy Award for Best Cinematography, and the highest-grossing film of all-time – records which stood for many decades to come and, in the case of the Box Office returns, if adjusted, would still stand today.

It may well be an antiquated, rose-tinted time-capsule of a part of history that has not only long-passed, but arguably never was in the first place (Malcolm X railed against the romantically inaccurate depiction of ‘happy Black slaves incapable of having an independent existence’), but Gone with the Wind is still a resounding classic. Whether you regard it as an epic period-set love story, or just a grandiose prototypical costume-drama soap-opera, there is plenty to enjoy in this grand, sweeping tale: iconic characters, witty script, innumerable extras and some of the biggest sets in screen history.

Taken as a product of its time, it’s a 1939 landmark epic that largely endures beyond its insensibilities, preserved in the National Film Registry as one of those titles which is regarded as culturally, historically or aesthetically significant, and often placed high in lists of Top Films of all time, including number 4 in the American Film Institute’s Top 100 American Films of All Time.

“All we got is cotton, and slaves... and arrogance.”

It’s 1861 – the eve of the American Civil War – and Scarlett O’Hara is a whimsical, capricious daughter of a large plantation-owner. Whilst the men naively celebrate the notion of going off into battle, and the women foolishly believe it will never happen, one man thinks that that the ill-equipped South don’t stand a chance against the industrial might of the North: Rhett Butler, a man disowned by his family, disfavoured by his own side and whispered-about amidst the women-folk as being a no-good philanderer.

Scarlett professes to be madly in love with Ashley Wilkes, a man bequeathed to be married to his own cousin, Scarlett’s friend Melanie Hamilton. In blind anger she immediately marries the first person she can find, Melanie’s hapless younger brother, but when the War starts, Scarlett soon finds herself a widow, still pining over the returning war veteran Ashley. All the while Rhett Butler remains a strong presence in her life, buying her gifts and frequently setting her straight in her silly mindless shenanigans – making no bones about the fact that he intends to win her heart, despite the fact that she categorically denies that she has any feelings for him.

As the War progresses, the South suffer terrible losses, and Scarlett finds herself surrounded by horrors, serving amidst the scant few doctors who aren’t even equipped to give the countless wounded soldiers a painless and quick death. With Melanie having just given birth, Scarlett rushes to return to her family plantation of Tara, and enlists the help of Rhett to do so; to which end he battles through looters, fires and explosions to get her safely to her home, before electing to go back and join the battle, however lost the War already is. Taking solace in one last (and first) kiss, as a soldier who will likely never return, the two part ways, their lives never to be the same again.

“With enough courage, you can do without reputation.”

Based on the Pulitzer Prize-winning 1936 novel by Margaret Mitchell, Gone with the Wind was one of the most trouble productions in film history, and it’s amazing that it was any kind of success at all, let alone the critically acclaimed and massive commercial success that it was in the end. Only Ben-Hur and Howard Hughes’s infamously expensive Hell’s Angels cost more.

Initially nobody appeared prepared to either adapt or star in an adaptation of the epic novel, but eventually Producer David O. Selznick (Rebecca, The Third Man) bought the rights for a then-unprecedented sum and set to work on both casting the production and getting it ready for the screen. Scriptwriter Sidney Howard wrote several early drafts, but refused to come to the set to make further revisions during production – and since his unedited version would have likely ended up being somewhere in the region of 6 hours long, Selznick called upon Ben Hecht to rewrite the entire script on-the-fly (despite this fact, it would only be Howard who was recognised by the resulting Best Adapted Screenplay Oscar).

This itself caused further troubles. The original director, George Cukor, did not like the script revisions, and wanted to revert to Howard’s earlier draft, clashing with Selznick over the changes – widening the rift that was already between them over disputes over production styles, and exacerbating the rumoured problems that Clark Gable had working with him. A new director was brought on-board just three weeks into filming – The Wizard of Oz’s Victor Fleming – who worked extensively with the new screenwriter and Selzner himself to turn in a finished product ready for the screen. He would win Best Director for his efforts.

Casting was similarly troubled, and it took over two years for them to settle on the main cast, with the leading lady cast at the very last minute to a relative unknown, the Brit actress Vivien Leigh. Just 26 at the time, her illicit affair with her soon-to-be-husband Lawrence Olivier also in its early days, Leigh found the production extremely difficult; she frequently clashed with the replacement director, Fleming, and would – alongside fellow actress Olivia de Havilland – meet secretly with the original director, Cukor, for coaching in the evenings; and she greatly missed Olivier, who was working on his own project in New York. Still, the end result was her first Oscar win for Best Actress.

“As God is my witness, I’ll never be hungry again!”

Even securing the actor they most wanted for the leading man – Clark Gable – proved difficult, as he had to be borrowed from MGM through Saltzman’s connections (his father-in-law was the chief of MGM, but still struck him a hard bargain requiring a large percentage of profits and distribution rights). With these two in place, however, it was believed that things would go more smoothly, and certainly their names garnered the film a considerable amount of press.

However, after the director left, and the new director and writer were brought on board, the cinematographer was next to fall, with Cinematographer Lee Garmes replaced with Ernest Haller and Technicolor expert Ray Rennahan, who went on to win the film another Oscar, this time for Best Cinematography (Colour). Undoubtedly the movie has some of the most timeless, epic panoramic shots; memorable moments which are jaw-dropping in their grand scale and ambitiousness.

Indeed, looking back, it’s amazing to think that this film survived such a torturous history and, moreso, went on to be not only so richly rewarded by the critics but also so monumentally successful.

The performances were quite rightly highly regarded, as the soap-opera stylisation could have easily been far more prevalent had it not been for some commendable contributions from the lead duo – Leigh and Gable simply embodying the love-hate relationship of their core mismatched lovers. Initially frustrated by Scarlett O’Hara’s seemingly inexhaustible whimsy, it’s a tribute to Leigh that she manages to reign it in, midway through, and make us feel genuinely sympathetic for this character who – faced with losing everything, manages to be the driving force to pull it all together and survive the horror in this wartorn nation.

“You should be kissed, and often... and by someone who knows how!”

Similarly Gable brings something more than his standard trademark charm and charisma to the role of bad-boy Rhett Butler, ultimately epitomising the sentiment of the very title of the movie, the struggle to convince the evasive Scarlett that they were two damaged souls destined to be together culminating in a loss of feelings himself; by the time she finally comes around, his feelings are gone with the wind.

Supporting we have myriad familiar faces, Olivia de Havilland bringing in a touching performance as Melanie, particularly when she suffers through the aftermath of her pregnancy; Leslie Howard making for a surprisingly unlikable Ashley Wilkes (although the focus of Scarlett O’Hara’s affections, Howard and Vivian Leigh notoriously clashed on set and found their scenes together hard to carry off); and Thomas Mitchell making for a suitably unhinged father, who loses his mind with the death of his wife and the pillaging of his home.

Hattie McDaniel famously became the first African-American to win an Academy Award (almost a quarter of a Century before Poitier would win Best Actor) for her supporting role as Scarlett’s outspoken servant, Mammy. McDaniel was also a singer, and became the first black woman to sing on the radio in the US, but back in 1939 even these milestone events did not change the fact that prejudice was still rife – even at the Academy Awards where she was given her Oscar, she had to sit segregated on her own table. Still it was a start.

“After all... tomorrow is another day.”

Sitting back and watching this movie almost 75 years after it was shot is certainly a reminder of times past, which is also – more obviously – what the title itself alludes to. Sure it paints a very romantic portrait of the South – complete with convivial slavery – but it also showcases the horrors of war; the losses, the wounded and the terrible ordeals that the survivors had to go through. It shows the effect on those desperate to cling on to the past, and enables us to root for those prepared to adapt – to do anything – just to survive.

It is only in this respect that the lead character of Scarlett O’Hara is in the least bit admirable. For the most part it is actually quite difficult to endure her seemingly interminable whimsy. For well over three hours she treats her persistent suitor, Rhett Butler, like he was dirt. You can tell that she has issues expressing how she feels, and that she has a shockingly aggressive defence mechanism, but, after a while, it’s just painful watching her be so self-destructive and cause damage to just about everybody around her, not least Rhett himself.

Indeed it’s more of a tragedy than a romance – and whilst perhaps all the great romances are (from Romeo & Juliet to Casablanca), normally there are a number of external factors which contribute to the inevitable downfall of the star-crossed lovers, rather than, as is the case here, one particular party who is largely to blame for her woeful capriciousness. However, as already stated, it is a tribute to the performances, the direction and the epic feel of the piece as a whole, that the film still largely escapes being labelled as mere soap melodrama, instead graduating to that timeless standing to sit alongside all of the other grand classics from this long-lost era.

For those few who haven’t yet discovered the rich ingredients of this lavish production, it will be a great joy to experience for the first time. This was Hollywood and the American Film Industry in its Golden age; at the absolute height of its power, and the end result is simply astounding.