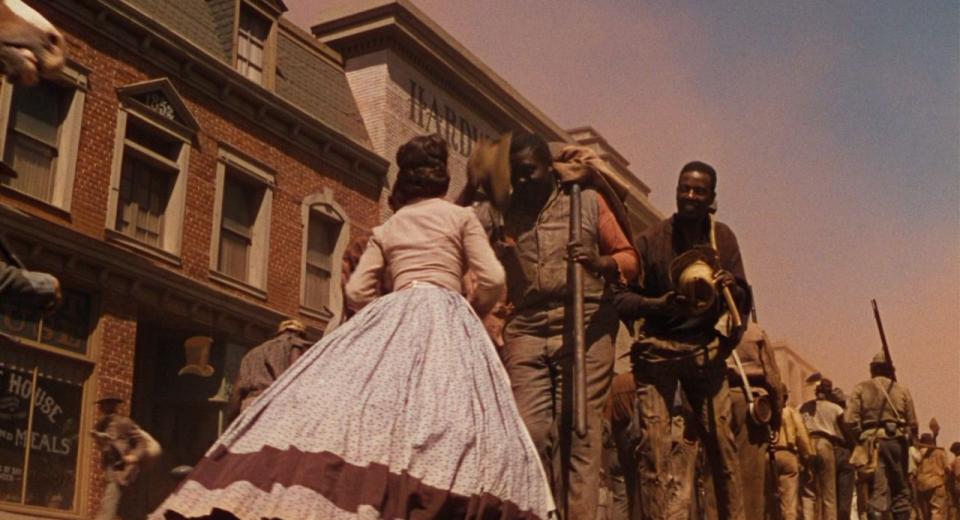 Warner have done another outstanding job with this superbly remastered Blu-ray release, which presents the movie in glorious 1080p/VC-1 High Definition in the film’s original Academy aspect ratio of 1.37:1 ‘fullscreen’. It seems unlikely that anybody – young or old – could have possibly seen the movie look any better than this, other than perhaps if the newly-minted 8K remaster was played in a few select theatres on the eve of this Blu-ray release. In any event, for the majority of us, this is – and surely will be for quite some time – the definitive video presentation for Gone with the Wind, a jaw-droppingly gorgeous rendition that provides us with a near-flawless look at the film. Reference quality all the way, this is up there with the likes of Lawrence of Arabia and The Wizard of Oz in terms of excellent presentations and truly commendable restoration work.

For a near-75-year-old classic, Gone with the Wind looks impressively sharp and well-defined, with a surprising amount of detail that, coupled with some warm non-invasive, naturally filmic grain, assures us that DNR has not been heavily applied. The rich colour scheme has been lovingly rendered, with superb, vivid and vibrant tones throughout that play across the entire array, and provide a gorgeous impression of times gone by. From the colourful racing green improvised curtain-dress to that crimson gem-like dress, the colours look largely stunning, with only the occasionally unhealthy skin tones betraying any colour timing deficiency in terms of the original Technicolor rendition. Any quibbles should be taken in the context of a video presentation that is, for the majority of the duration, absolutely stunning, allowing the wonderful panoramic vistas – both real and matte paintings – to come alive; allowing darker sequences to shine with impressive black levels; and providing a most excellent accompaniment to the main feature, enhancing your enjoyment of this classic no end. In terms of reference quality classic film presentations, this is almost as good as Lawrence of Arabia and should stun fans and newcomers alike. In amidst the myriad audio options we find ourselves graced with both the original mono soundtrack as well as a remixed Dolby TrueHD 5.1 alternative. Having the originals mono included will surely keep the purists happy but most people will be more richly rewarded by giving the remix a shot; it offers a significantly more enveloping, atmospheric accompaniment for the film, bringing out the best in it whilst also staying true to the often low-key dynamics, restrained effects and all-important dialogue. It’s the score which really impresses, however, soaring above the proceedings and championing the grandstanding epic at every possible opportunity.

Whichever offering you pick, you’ll find the dialogue keenly placed at the front of your setup, largely dominating the fronts and centre channels where appropriate, set that little bit higher on the mono track, whilst more tastefully blended-in on the remix. With the remix the surround tracks are given some welcome effects to cover, whether it be the larger parties and gatherings or the imposing battle sequences, particularly when shells come into play. That memorable moment where Rhett navigates the ravaged back-alleys strewn with rioters in a bid to escape back to Tara – all the while set against the backdrop of a blazing inferno and ready-to-ignite explosives – has a wonderful intensity to it which simply isn’t present on the mono equivalent. They’ve done a truly impressive job here, which should be celebrated. Perhaps it’s not quite demo quality – it’s not quite demo material – but the film still undoubtedly sounds better than it ever has before. Film Historian Rudy Behlmer provides a fascinating full-length accompaniment to the main feature, imparting every minute little background detail he has sourced and researched into the film, whilst also painstakingly examining the numerous differences between the film and the original novel from which it was adapted. Whilst it might be a hard slog spending a further three-and-a-half-hours on the Commentary, for those fans that are prepared to invest the time, this is a rich and welcome reward.

The Making of a Legend (Narrated by Christopher Plummer) – This whopping 2-hour Documentary beats out all the rest not just in length but also in comprehensive coverage of the making of this classic. Charting the history of the production, from the purchase of the rights to the deals required to get it finally made, to the casting and the troublesome shoot itself, it’s a fantastic extras, complete with myriad cast and crew interviews, archival screentests and production footage, and fond reflections of a time long passed.

Warner Bros. Home Entertainment Presents 1939: Hollywood’s Greatest Year (Narrated by Kenneth Branagh) – This almost as impressively mammoth second Documentary clocks in at well over an hour and takes a broader overview at the milestone year in which this epic came into being, alongside numerous other grand classics, marking it as a true high point in Hollywood’s history.

Gone with the Wind: The Legend Lives On – This half-hour Documentary supplants the other two by taking a look at the legacy of this classic, with retrospective interviews, some nice footage of the historical sites used for the filming, as well as trips to museums to look at some of the remaining pieces of the original sets.

Restoring a Legend – This 20-minute Featurette chronicles the commendable restoration efforts made, which took place back in 2004 and saw the film remastered in 8K resolution.

1939 Premiere Newsreel: Dixie Hails Gone with the Wind – A four-minute look at some of the celebrations during the premiere of the movie.

1940 MGM Historical Short “The Old South” – a ten-minute look at the history of the times, painting a slightly too forgiving portrait of the rampant slavery but serving as a nice scene-setter for those who aren’t history buffs.

1961 Premiere Newsreel: Atlanta Civil War Centennial – a further four-minute look, this time at the 100-year anniversary of the War, and the movie’s second ‘premiere’ celebrations at the time.

Moviola: The Scarlett O’Hara Wars 1980 WBTV Special – this TV movie, running at over an hour-and-a-half in length, has Tony Curtis playing producer David O. Selznick, as we get a re-enactment of Gone with the Wind’s notoriously troubled production history. Perhaps not as captivating as it should have been, it’s still nice that they went to the effort of including it here.

Melanie Remembers: Reflections by Olivia de Havilland – this 40-minute retrospective has the real actress looking back at the production, the part she had to play, the work of her fellow actors, the troubles both on the set and behind the scenes, and how everything came together to produce such a bona fide classic.

Gable: The King Remembered – the Cast Profile section is split into two parts, with this first section dedicated to Clark Gable, and running at over an hour in length. It’s a fine biography-channel-style production which reflects on the actor’s entire career.

Vivien Leigh: Scarlett and Beyond – the Cast Profile section continues with a further three-quarters-of-an-hour dedicated to our leading lady, which offers a slightly more revealing look behind the troubled classic actress and the mental issues that came to the fore particularly during the latter end of her career.

The Supporting Players – this half-hour segment is dedicated to ‘cameo portraits of an unforgettable ensemble’, taking a pit-stop tour of the impressive supporting cast, and noting what they brought to the piece as well as a little bit into each one of their film backgrounds.

The disc is rounded out by a number of Trailers. Passionate, provocative, emotional and epic, MGM’s 1939 masterpiece Gone with the Wind endures to this day as a true classic, transcending the limitations of what could have easily been a typically throwaway melodramatic soap script, beautifully blending in the vivid backdrop of a wartorn nation and a massive shift in history, and bringing forth a bevy of richly portrayed characters led by two actors at the absolute top of their game. Yes, it may still paint an overly romantic view of Southern slavery, and yes the romantic whimsy of the piece does occasionally stretch your endurance – as does the epic length, which is both well-measured at the start and moderately rushed towards the end – but surely any criticisms levelled against this classic must be tempered with time and the film’s undeniable importance and inescapable energy.

Brought to Blu-ray back in 2009 with a fantastic package – as part of the 70th Anniversary celebrations – even now as we approach the inevitable 75th Anniversary set, this release stands as impressive in every way, boasting stunningly remastered video and audio, as well as all of the extras that you could possibly hope for. It doesn’t get much better than this. Sure, if you haven’t seen Gone with the Wind, then I don’t blame you for wanting to rent it first and see what all the fuss is about, but I also recommend you consider a blind buy – it’s likely that most every film fan will want to eventually add this to their collection.