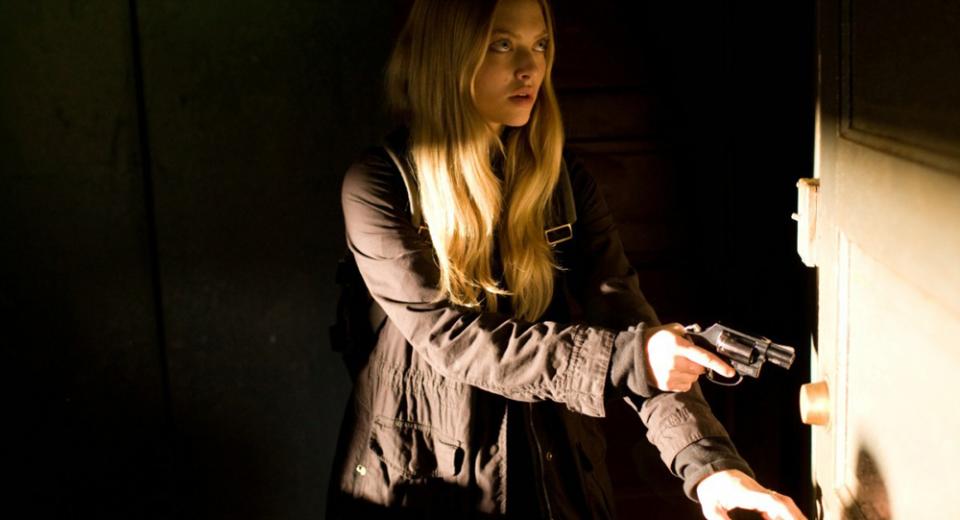 Gone is presented here in it's original aspect of 2.40:1 AVC encode, and it definitely delivers on the image front. With a crisp and clean image, the panning and sweeping opening shots are a sight to behold. Detail is immaculate, and but for some slight and very minor lateral juddering, it's as smooth as the proverbial. Gone was shot digitally on Red cameras, something I was surprised to hear as I had only recently been discussing them with some colleagues, and I can confirm that the result is very pleasing and doesn't suffer from appearing too digitally clean, a reservation my colleagues expressed. There is a welcome amount of grain on the image, which doesn't detract from the clarity at all – in fact, it adds a filmic depth to the picture often lost with some digital images we see these days.

Colour is balanced and deliberate. Grading leans slightly toward the blue end of the spectrum, but it's not at all heavy handed and fits in well with the green of Oregon's beautiful Forest National park district. The natural elements in this movie are afforded a vibrancy and depth that I found quite delightful. Rich and unsaturated, it's a luscious and crystal clear visual feast.

Blacks are deep and strong, giving shadow detail a lift. Ever so slightly contrast heavy at times, which can make some of the brighter parts of the image almost whiter than white. This doesn't feel like a mistake to me, and at the least, lends the blacks in the image a bold richness.

Skin tones are natural, and detailed. Close ups on Jill's face reveal detail down to the pores themselves, and in the bathroom scene at the beginning of the movie, we can see the make up on Molly's face very clearly. This level of detail can show up some issues though, especially with the make up department, but there's little to be bothered about here. Perhaps Molly just isn't very good at putting on make up? The point is, you can see it very clearly.

The last thing I wanted to mention on the picture was the clever use of boca on the rain splashes on Jill's car window, especially at night. Focus is sharp and smooth to transition, and never loses detail. Complimented wonderfully by the colour palette and grading.

All in all, an excellent picture presentation here that is extremely close to reference quality, but for one or two very minor gripes. Assessing the sound based on it's technical specifics, which boast an impressive 5.1 DTS-HD Master track, is a fairly standard affair. There's nothing new to it creatively, and you'll have heard it all before. Dialogue is crisp, clean and precisely balanced. Surround channels are used to good effect and mix demonstrates some very nice high frequencies throughout. Contrasted by heavy use of the LFE for sound effects, but not overpowering and boomy, it's a full and balanced mix - not too top heavy, and no prolonged bass booms. The score seems standard Action Thriller score 101 from David Buckley, a regular composer to the action genre, and it bounces along with pulsating bass notes punctuated by fast paced beats to elevate the mood – fitting, if unimaginative. All in all, you won't find any stand out sound design or breathtaking ambience tracks, but you will find a technically good audio presentation with an excellently balanced mix. No extras at all unfortunately In what is unquestionably a completely saturated genre we're offered what turns out to be a quietly unassuming and surprisingly watchable action thriller. Unlikely to have survived a lengthy stay in theatres, it still delivers an enjoyable, if predictable story, and a traditional directorial style. The cast performances are good for the most part, bar a few questionable screenplay decisions and scripting woes. Amanda Seyfried is solid as Jill, the main protagonist, and definitely cuts the mustard in the leading lady stakes. On the whole it is inevitable that this movie will eventually pass into the "forgotten" ether, but at around 90 minutes, it's a modest offering that could quite reasonably be described as a “No Brainer”. This won't challenge you in any way, but will give you a passable story with decent performances. You can switch off and enjoy.

With excellent picture quality, and decent audio track, but completely devoid of any additional content, this Blu-ray package is a sight to behold that might leave you feeling a little cold if you happen to dislike the movie (entirely plausible). But for a few stand out moments, it's a story driven thriller and therefore doesnt boast any huge explosions or lots of gunfire, so enjoyment of the movie itself is what we're relying on to be able to appreciate the visual quality - perhaps not enough?

Sadly, the exclusion of any extras at all make this disc drop points at the last hurdle, which is a shame as the movie is enjoyable, and the image is very good indeed.