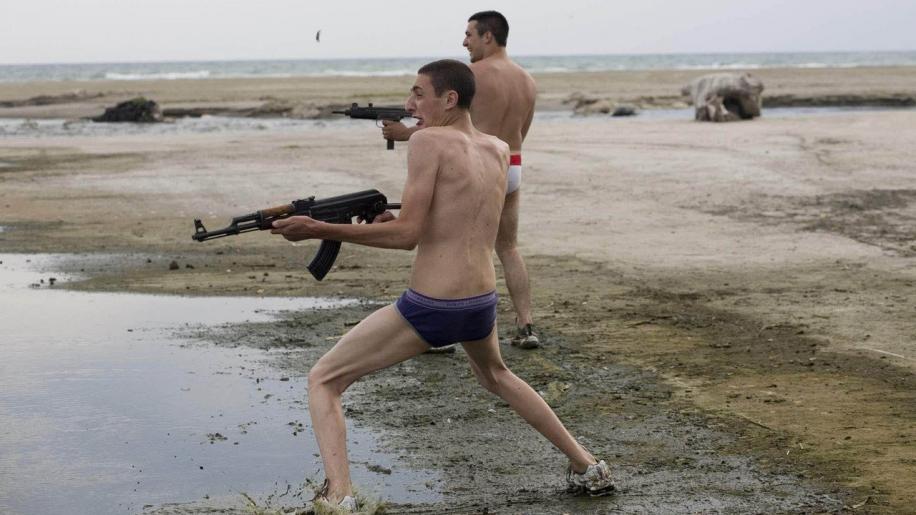 The conveyor belt of book to film adaptations is long and growing ever longer by the minute. In an industry that seems to convince itself about the lack of writing talent available to create genuinely fresh and new fictional tales, the cinematic producers so often turn to another medium to scrabble for artistic licence and already proven tales that will grip an audience. So it is once again that a film comes to a home format with a lineage of having been sold on the printed page prior to its genesis on celluloid. The difference in this case being that the book in question was one of the most startlingly explosive and supremely powerful tales of modern criminality in recent years. Make no mistake Gomorrah has a pedigree that far outweighs virtually any true crime tale since Scorsese's teamings with Nicholas Pillegi, and with it being a story of Italian origin it should come as no great surprise that the bushy eyebrowed Italian American crime impresario himself has lent his name to director Matteo Garrone's film for its American release.

For those unaware of the origins of Gomorrah, it started out as a 2006 book by Roberto Saviano. It is written in an investigative journalistic fashion and recounts many stories of the Camorra, a Neapolitan criminal organisation that has so far managed to remain in the shadows of the world's consciousness, partly due to the higher profile of the Sicilian Cosa Nostra, amongst other reasons. It was told from a first person perspective (that of Saviano, obviously) and proceeded to intricately pick apart various aspects of this brutal regime's economy, violence and continued success. It may sound all too familiar, but it was the sheer scope that startled many, as the links with businesses across the globe and the criminal fraternities involvement in the prosperity of legitimate enterprises as an integral link between the legal and illegal faces of modern business that took so many by surprise. It was rightly heralded by many as a work of great insight that far eclipsed so many other pulp paperbacks which merely recounted sordid stories of true crime and violent gangs.

So what of the adaptation? Well it dispenses with the first person monologue in favour of a more open and fluent style of narrative. Saviano is no longer the storyteller who guides us through the murky depths of drug running and death squads. Instead he is now reduced to the status of being an extra character we meet about half an hour into our sojourn into Italian criminality. This was likely done for several reasons, perhaps chief of which was the manner in which a singular perspective could have been somewhat overpowering. The list of badly produced monologues in films is as long as the equator and it would have been a shame for this to have fallen into a trap of distracting the viewer by continually drawing their attention to both an interior voice and exterior world. It seems far easier to present the information and allow it to be interpreted without evocative dialogue overlaying proceedings. The first bonus to this route of presenting the narrative is that of realism. Hearing a person's thoughts as we are bearing witness to a scene can often create the aforementioned distance between subject and onlooker. Thus the filmic styling seems to be far grittier and more akin to a grass roots guerrilla film made on a shoe string budget.

Another detour from the book is the way in which information is processed. Saviano split his writing up into specific sections each of which took us on a journey into one particular aspect of the Camorristi's dealings. With subject headings such as “The Port”, “Women” and “The Secondigliano War”, there was a compartmentalised view that only became a whole once the entire book had been read and properly digested. Matteo Garrone instead focuses on a mere five stories and interweaves details picked from numerous chapters, creating a real sense of a timeline in which events happen. This is arguably an area that was sorely lacking in Saviano's writing, which could often feel like a timeless vortex, not fixed to any period. It wasn't surprising, given Saviano's depiction of this lifestyle as a continuity of the region, that ever shifted but never truly changed, dates almost seemed irrelevant but to a cinema audience a tangible timeline is a far more palatable way of digesting a story.

Garrone makes no attempts to pull any punches, further distancing himself from the book which slowly grew in momentum until it hit upon a particularly bloody conflict. If a picture is worth a thousand words then Garrone does his best to cut through the musings on the nature of violence by throwing us straight in at the deep end of the moral quagmire, as the opening sequence gives us our first real glimpse of the blood that is spilled for this secret economy to keep flowing. Smiles are exchanged, friends partake in some idle chit chat and banter before guns are drawn and a clinical hit leaves three men dead. The perpetrators hand their weapons to a young woman who secretes them in a bag and they all stroll out into the afternoon sun and never break stride. The director orchestrates no build up of tension or distrust prior to this act of barbarism, nor is any reason easily handed to the audience. The meaning is clear - this is a cut throat world where friends kill friends.

This stark depiction of brutality is made all the more powerful due to the cinematographical choices made. The film is shot with handheld cameras, which swivel around, jerk, bob and weave in this environment of unease. It adds immensely to the sense of powerlessness and unsteadiness certain characters feel here. One character that makes the transition from book to screen is that of Don Ciro, a submarine - the term given to those who dole out a stipend to the families of jailed/killed gang members and who have to conduct their business under the radar. His unassuming presence is aided by the fly on the wall style, as it follows him through the many stairwells, landings and doorways of the Neapolitan housing estates. These concrete monstrosities reek of idealised designs that were meant to give space efficient dwellings to those too poor to afford their own homes, yet end up monolithic masses of crumbling cement and rusted steel. The camera follows Don Ciro on his rounds, seeing his nervous tics as he peers over his shoulder, taking in both the foreground and the background so as to complete our view of these labyrinthine projects. The use of real houses pushes the camera into the room, furthering the sense of cramped people oppressed both structurally and socially. At times it seems more like a home movie, with cameras on auto that leave us as sunblind as Ciro when he enters a dwelling, unsure of what lurks in the gloom for him. The decision to give this adaptation an almost docu-drama feel could easily have backfired for Garrone, yet in almost every scenario it works perfectly, entrenching us in the sights and sounds of an environment that can both assault the senses and deafen with silence.

The acting continues this approach, with all involved appearing never less than entirely authentic. Dialogue is not thrown out as if by RADA trained thespians but rather dropped from the side of the mouth. Realism is the order of the day here and at no point is it deviated from or indeed does it come across as over accentuated or laboured. There is a relaxed, dare I say Italian, atmosphere of life rolling along to a tune that everyone has heard before. The rare moments of unbridled emotion are from one character in particular, through which we are given one of the cautionary tales and also see the climax of the piece. He is swept along with misplaced loyalty and notions that should not be held by one so young, and there is an almost tragic inevitability to the outcome that lays in wait for him. The appearance of Saviano as a figure who makes the correct choice is one of the few moments that jars slightly with the general tone of a culture that sweeps all before it into the mire, but it is hard not to allow this moment of hubris given the profundity of his writing on the subject matter.

Ultimately, Gomorrah is a film that simply has to be seen by all those with even a passing interest in the world of criminality. It lacks the impact of the book's more savage slayings, which in itself is a little odd considering the tradition of increased artistic licence with such things when they make the transition to the screen, but it remains faithful to the flavour of the stories it was based upon. It is different enough to be considered an ideal accompaniment to the prior written work rather than inferior or superior. Whereas Saviano's intention appears to have been comprehension of the world that lay around him, Garrone shifts the emphasis to merely allowing smaller examples of this criminal's playground to rise to the surface, holding a window up to that which must be viewed rather than commenting upon it. The tales picked by the director may lack the intricate details of economic rings and cultural moirés that made the book such a revelation, but they make their point perfectly succinctly about the human tragedy caught in the storm.