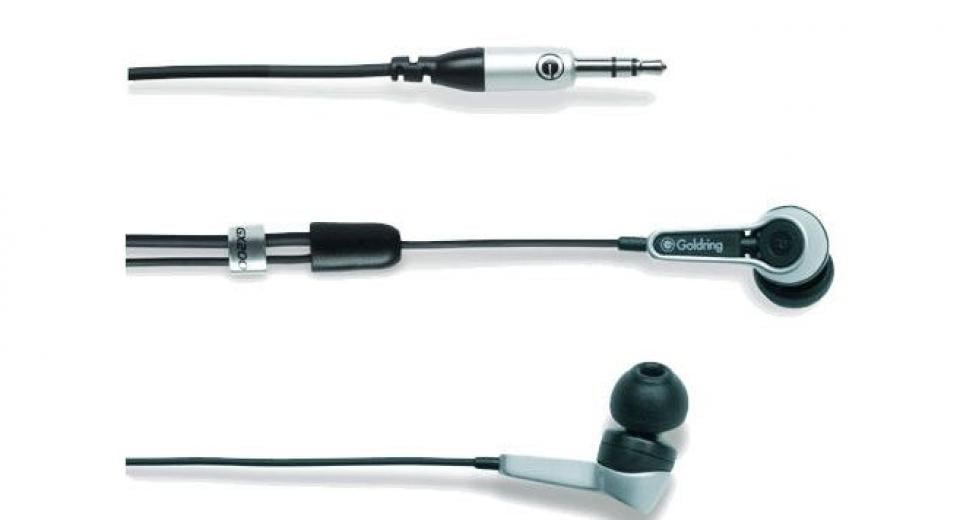 Goldring is not a name I’d heard of up until this review, which doesn’t mean I’m ignorant, but rather I don’t move in the same circles shall we say. Apparently they’ve been around for just over 100 years, where the Scharf Brothers in Germany began manufacturing. Their first phonograph, the Juwel Electro Soundbox, was released in 1926 and more recently, they’ve released the GR1 and GR2 turntables (in 2004 and 2005 respectively), the latter winning several awards and in 2006 they’ve released the DR50, DR100 and DR150 headphones, again received well by the critics.

However, they’ve just released the GX200 headphones in the week that I’m writing this review, although I’ve been living with them for the last month, giving them a thorough workout on both the Apple iPod and Microsoft Zune.

The headphones themselves are the in-ear type, utilising a Titanium Film Diaphragm and Neodymium magnet , the magnet is quite common in most mid range headphones. The weight of the headphones is only 16g, making them pretty light as well. The first noticeable change to many headsets I own, is the 3.5mm jackplug is aluminium rather than gold plated, which surprised me, considering how many headphones proudly tout their gold jackplugs. The headphones themselves have a screw locking system as well, which isn’t used for the silicon earbuds, but rather for the Comply canal tips. In the box we get 3 different sizes of silicon earbuds and one pair of the Comply tips, as well as a neat little carry case. Now, the main reason to get these headphones is for the Comply tips, due to their noise reduction ability over the silicon earbuds. The way that these work, once screwed onto the headphones, is that you squeeze the ends before you place them in your ears. The tips then spring back into shape, but as they are now in your ear they create a seal, thus blocking the external noise. Cool eh? So, the obvious part of the review is to ignore the silicon tips and concentrate on the Comply tips and what better way to test them, than in London, on the tube and on the train home!!Plugging them into my Zune, squeezing the tips and inserting in my ears was interesting, compared to other ‘phones, but within 30 seconds the foam had expanded creating a seal. Setting the volume to 11 (I would have set it to 10, which is in the middle, but hey, it’s one louder), I chose NoFX’s “Wolves In Wolves Clothing” for the walk in London and the tube trip. May I just say “wow”. The Comply tips did their job superbly, blocking out the ambient noise of passengers and the carriages as well. With the music only around the half way mark, I couldn’t hear anything except the music and even when the silence between tracks occurred, the ambient sounds were virtually non-existent too.

NoFX on the other hand may not be everyone’s cup of tea, but I’m not playing Eminem on my system otherwise I would jump in front of the next train that came along, but the riffs were clear and crisp, the drums were solid with a punchy bass that wasn’t overblown and the vocals were clearer than ever before.

Ok, so punk might not be the best challenge to these, so while sitting on the train at Victoria, I started flicking through the different artists on my Zune – Norah Jones sounded delightful, with the low end sounding deep and resonant, the high end sounding crisp and clean and the vocals deep and breathy as only Norah can sing. Slayer sounded frantic as usual, but again, little details could be heard in songs such as “Reign In Blood” that my Skullcandy headset wouldn’t have picked up on. Bill Hicks comedy routines, even at the medium volume, were easy to listen to and didn’t require an increase in volume due to the train running down the track. Slipknot was much the same as Slayer, The Ramones were fantastic as always. Even Joe Satriani’s superb “Surfing With The Alien” sounded crisp with more detail in the track than I’d heard via my ‘Candy’s. I even played some Fergalicious by Fergie, which is so NOT my music taste, and again, the headset sounded great. For the next hour, I tried artist after artist and all sounded better than via my trusted Skullcandy’s. So much so, that the Candy’s have been retired for the last few weeks and these have been used extensively. I was worried that the Comply tips wouldn’t work as well after many insertions, but they still do, but replacement tips can easily be bought if needed as and when.

I’ve read a review that mentioned the mid-range was not as good as the high and low ranges on these headphones – I certainly didn’t notice that, although it could be due to my music test material. I could of course test them using dance music, but I’d rather shoot myself that endure that.

One final note, for headphone aficionados, is that they can be worn in 3 different ways – either in the Necklace style, the Symmetric style or the Asymmetric style, which is good news if you don’t like the “round the back” of the head style commonly seen.
In summary, these comfortable headphones with excellent noise reduction qualities, have a superb sound for many genres of music.

In fact they work exceedingly well with spoken word material and you don’t have to turn your audio player to the maximum, which makes a change! For the money (around £50), they are definitely worth adding to your short list. I’d love to compare these to some of the Shure or Ultimate Ears range, but considering that these are prices at the entry level of those manufacturers, it’s a real tough act to follow.