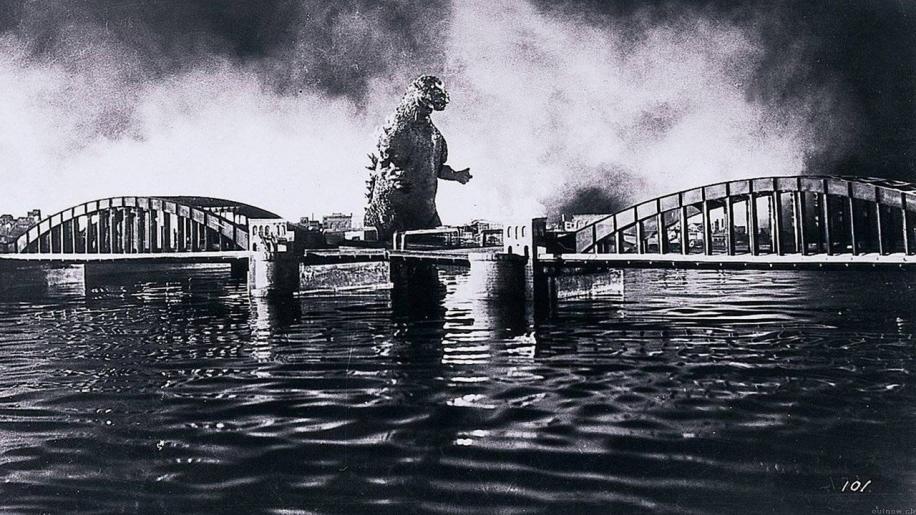 In this current climate of big studio film production that seems obsessed by massive summer blockbusters that oh so frequently revolve around a monumental monster threatening to destroy civilization, it is sometimes easy to forget where these popcorn munchathons first found their wings. Thus it is with great pleasure that I am given the opportunity to review a film that, for many, helped epitomise the genre of monster movies - Gojira. It is easy enough to quibble over how original the first Godzilla film was, what with numerous sources citing the influence that the Harryhausen creature feature The Beast from 20,000 Fathoms had on Toho producer Tomoyuki Tanaka. The similarities are easy enough to draw, what with both films revolving around a huge lumbering dinosaur that lays waste to the surrounding areas of the seas from which it has emerged. Yet Gojira is quite literally a different beast in so many ways.

Being Japanese, it was deemed necessary to release the film in the US with additional material featuring Raymond Burr (long before Ironside) shoehorned into the plot. And “plot” is the keyword here, as the US and Japanese versions of the film take on somewhat different meanings and have subsequently divergent tones to their narrative, and it is this which sets Gojira apart from its American mega-monster brethren of the time. Director Ishiro Honda starts proceedings with an accident aboard a freighter named the Eiko Maru. The men aboard this vessel see a blinding light and not long after this shocking occurrence the ship is reported as lost. The cause isn't officially verified until some time later, but we soon learn of an aging islander's tales of a giant beast that comes forth from the ocean. What the scientists discover - a prehistoric creature awakened from his millennial slumber by atomic testing, cements the correlation of the opening sequence to the real life incident of the Lucky Dragon 5, in which a Japanese fishing boat reportedly drew too close to the fallout of US testing of Hydrogen bombs around the Bikini Atoll on March 1st 1954. Many have drawn the parallel between artistic licence and the true inspiration for this scene, which happened in the same year as the film's production and release, and it is telling that this simple set-up snowballs even further into the fears of the Japanese people post World War II, and more importantly, post Hiroshima and Nagasaki.

Whilst the American creature films of the period can be generally likened to a simile about the possibility of invasion, something America was particularly worried about during not only the war but also seemingly decades afterwards, the Japanese take on the monstrosities which may lay siege to their land was similar yet strikingly opposing in many ways. Gojira, for the first and much of the second acts, is viewed as an enigmatic force to be discussed. Even within the film itself, there is much analysis as to what his sudden appearance means. Rather than jumping straight from scientific scepticism through societal panic to military might, as the Hollywood fare of the era was to repeat in an almost cyclical manner, the approach of Honda is distinctly Japanese and can be read as strangely ambiguous at times.

Upon the Jurassic gargoyle's appearance, there is much discussion and ponderance placed upon what the correct course of action is. We have panic, but it isn't the histrionic, and often camp, screams of women as they run away and look back in terror at their ever nearing predator as witnessed in numerous Western creature features. Instead, what we are given is an initial foray, in which a small fishing community is hit by the fearsome behemoth. Not a great deal of the titular monster is seen, however the tension is ramped up by the devastation that is left in his wake and a family torn apart by his gigantic footsteps. Discussions abound and the introduction of Takashi Shimura (who starred in Seven Samurai the same year, a combination of the joint production of which alongside Gojira nearly toppled the studio financially) beckons in the film proper. His portrayal of Professor of palaeontology Dr Yamane is every bit as dry and world weary as the iconic Kambei Shimada in the aforementioned Kurosawa samurai classic. Yamane may be pushed to one side at times by the breakthrough of the young Akira Takarada, but the elder gentleman's shadow looms large over many of the dilemmas and struggles that continue in the narrative. Indeed, there is a central human element that is brought to the fore thanks to the introduction of another scientist, Dr Serizawa, whose presence stirs the waters of not only a love triangle, but many Gojira related dilemmas, as well as an interesting depiction of a Japanese war veteran.

As much as Gojira can be read as a warning against the use of powers that man has not necessarily gained the ability to truly harness, there is also a social element to proceedings as well. During the discovery of the first giant footprint, the professor seems more interested in what the discovery of a trilobite means to his hypothesis than the village folk, who are distraught at their well having been contaminated with radiation. Once a meeting is called to discuss what the correct course of action is, the politicians argue that there should be a cover up of sorts, arguing that to divulge what has happened would sour US-Japanese relations and only spread panic, whilst the commoners whose livelihoods have been destroyed due to the dearth of fish protest loudly that the truth may be inconvenient but it is necessary to tell the people. I don't want to give the impression that I read Gojira as some kind of Marxist treatise about the plights of the proletariat but the scenes that directly follow the first major sighting say a lot about the differences that the East and West were taking with regards the direction such B movie fare would take.

Daikaiju Eiga (monster movies) unfortunately shifted to more preposterous lengths to give the viewers what they wanted. It soon became apparent that this was little more than a lust to witness the visage of multitudes of large creatures battling over cityscapes and create a strange Top Trumps of mythical beasts to do battle. The original Godzilla is even further from these preposterous outings than it arguably is from its American brethren. In terms of effects it is still trumped by the genius of Harryhausen and the kind of stop motion masterpieces that Japanese studios neither had the staff or budget to create. When viewed as multilayered works of fiction though, Gojira leads the way as not only an allegory that warns of rampant scientific progress that is beyond restraint, but also as a snapshot of Japanese society of the time, complete with fears, social differences and attitudes towards recent events of the period, as well as the age old debate of whether science is playing God. That it also entertains can at times almost seem like little more than icing on the big green rubber faced cake. It was widely panned by the critics of the day in its homeland but yet it pulled through due to the sheer enthusiasm that it was met with by its audiences. It is far from perfect, but if you can look past the hugely dated effects that weren't even particularly accomplished for 1954, you'll find a far slower and more contemplative monster movie than perhaps you might have remembered. It's a shame that countless sequels have muddied the waters so much, but this debut for the radioactive beast is still worthy of a viewing.