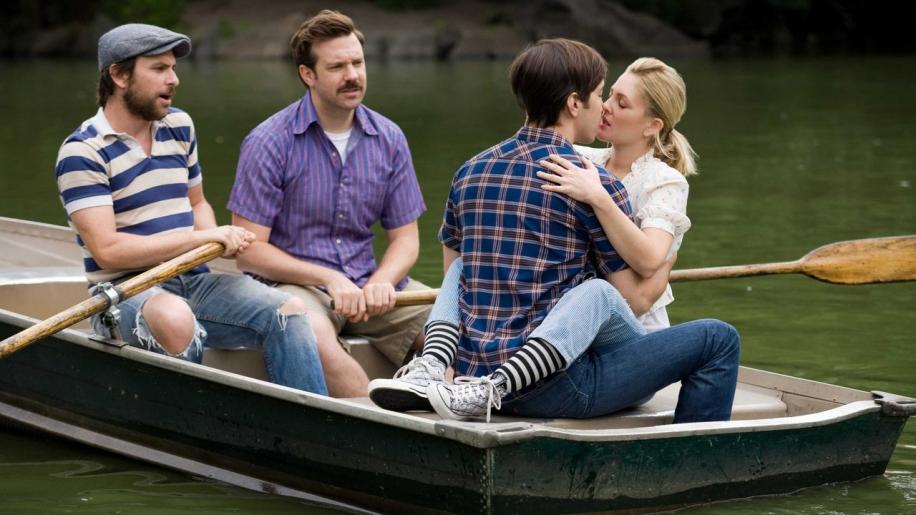 There’s always another romantic comedy around the corner, and – much like the routine action movies of the 80s – they all still follow the same predictable pattern: initially mismatched couple find that they actually liked one another, start dating, overcome a few minor hurdles and fall in love, then are put through the meat-grinder in a desperate attempt to provoke a will-they-won’t-they feeling in the audience, before they eventually come together for a happy ending. That’s the formula, and it’s a hard genre within which to develop fresh and original ideas. The only thing that really gets changed around is that will-they-won’t-they section, with the headliners in the romcom genre – Jennifer Aniston and J-Lo – going to great length to bring something new to the table (The Switch and The Back-Up Plan both relied on artificial insemination as their “original” tweaks). They all tend to fail pretty miserably, but (often largely female) romcom audiences are as forgiving as the red-blooded college boys who loved all those testosterone-packed action-affairs that the likes of Stallone and Schwarzenegger used to dish out in the 80s, i.e. they may be able to see the end coming from the day they first spotted the promotional poster, but that doesn’t stop them enjoying the ride. A few more daring filmmakers have attempted to produce alternative dramas in this same sub-genre, from the bitter The Break-Up (with Aniston again), which must have been a shock to the system of those expecting a more, erm, pleasant movie; to 500 Days of Summer, which was driven by decent performances by Joseph Gordon-Levitt (Inception) and Zooey Deschanel but was essentially less a love story and more an unrequited love story, which also kind of takes it too far away from conventional romcom fare to make it all that appealing. Going the Distance, the latest entry in the genre, is based around the gambit of whether or not it’s possible to realistically conduct meaningful long-distance relationships. And, surprisingly, it is quite a fresh, unusual offering, even if it is still confined to many of the conventional romcom trademarks.

We’re in New York, and fledgling journalist, Erin, is a thirty-one year old intern working for a temporary stint at a New York paper, hoping for a subsequent job, but prepared to return to San Francisco in the interim. Having a drink with a colleague after work, she meets a younger guy in a bar, Garret, who works for a record label, and has just – literally that day – broken up with his girlfriend. Both are clear about not wanting a long-term relationship, both seem to be out just to have fun, and – knowing this – they start hanging out together, meeting for dinner and spending days out, with no expectations. Despite all this, they clearly can’t deny not only the attraction that they have for one another, but also the blossoming companionship that has resulted, and, over the subsequent weeks, grow closer and closer. But when Erin’s internship comes to an end, she is forced to head back to San Francisco, and the two have to decide whether or not to give up their fledgling relationship, or try and go it long-distance.

Although Going the Distance doesn’t have a particularly promising start – introducing both characters as being not all that likeable (Garret is so out of touch with his soon-to-be-ex-girlfriend that you wonder how they ever got together in the first place and Erin shows how unattractive crass women can be) and then putting them together in a marginally unrealistic, haphazard way – it soon breaks loose of its painfully desperate attempts to be different, and actually ends up finding a more natural transition. The couple aren’t star-crossed lovers, with a Twilight-esque pain to their ‘unique’ feelings for one another; they have the chemistry of great friends, who enjoy one another’s company, and are both single – so don’t mind enjoying a little friends-with-benefits action on the side. Sure, there are a few uncomfortable moments before they hit their stride, but – before long – they are hanging together and having a whole load of fun. It’s actually quite an honest depiction of what feels like a more natural start of a relationship than your run-of-the-mill trademark-romantic soul-mates.

The trouble, of course, is that – particularly as this is still a fairly traditional romantic comedy – you feel a little bit like they’re going to, eventually, meet the people that they are truly meant to be with. It’s the only bit that, in my opinion, did not quite sit right. You can see why these two people got together, but mainly because they got on really well and – to be blunt – had nothing better to do. Garret’s young, dumb and on the rebound, and Erin feels a little older, seems a little out of the game with her cynical proto-feminist attitude, and is clearly pretty chuffed to be having a fling with an eager younger guy. But I’m getting all negative here, when I should really reiterate that this is still quite a refreshing, unusual entry in what is perhaps the most heavily constricted and hackneyed genre out there.

It’s both a good and a bad thing that the two central stars – Drew Barrymore (endearing in 50 First Dates) and Justin Long (who was a far from bad foil for Bruce Willis in Die Hard 4.0) – are a real-life couple. Sure, they clearly get on well together, have that aforementioned ‘friends-with-benefits’ air about them, but the path to eventual love does not quite ring true. That’s the bit they have to re-enact, and it just doesn’t work. They feel like two people who are already comfortable with one another, pretending to be uncomfortable with one another. Still, the chemistry is nice, and adds a nice touch to their relatively witty banter. There are few other supporting cast members that are going to jump out you as being particularly famous faces, but Charlie Day stands out somewhat in his performance as Garret’s unabashed roommate Dan, and his repartee with Garret’s other mate, ‘Box’, gives the movie some of its funniest lines. Christina Applegate, on the other hand, goes about her character the wrong way around, and the end result is not particularly pleasant to watch – coming across as prissy, neurotic, and exhibiting the bad side of OCD.

Oddly, for a romantic comedy, it’s the comedy element that actually doesn’t always work. Normally it’s the romance that’s hackneyed, and doesn’t ring true, but here the romance is relatively fresh – and the comedy often feels forced. Dan and Box may be hilariously sarcastic (the impression Box does of Garret frantically texting Erin is spot-on), but Garret and Erin are, well, let’s just say they’re less successful. A couple of Garret’s jokes alone should have put an end to his relationship then and there. Sure, some of them intentionally fall flat, but are actually a lot worse than just bad jokes. Seriously, who makes a joke about a mother’s vagina in front of their girlfriend? And what’s with all the random R-rated humour? Seriously, just because it worked in Superbad, doesn’t mean it’ll work in a shameless imitator. Here it merely comes across as, well, crass. And don’t call me a prude because I absolutely loved Superbad.

But there’s enough authentic chemistry and refreshing honesty within this production to keep it going from one humorous moment to the next; a little montage action padding things out (the narrative has an unrealistically long timeline to it), but with an otherwise reasonably streamlined feel to its hundred minute runtime. You’ll watch it for its unusual take on authentic relationship evolution, and for the genuine chemistry of the on-and-off-screen stars. It’s not a defining landmark event in terms of romantic comedies, but it’s something a little different – largely in a good way – in a very stagnant genre. Certainly it’s considerably more guy-friendly than many of its date movie ilk (I’m looking at you two, Jennifers, Aniston and Lo’) and probably worth a Saturday night rental on that basis.