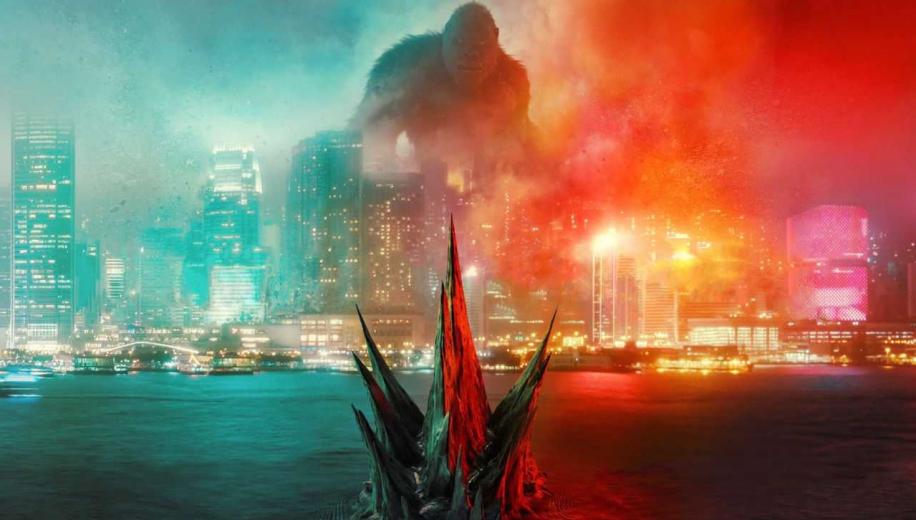 ﻿The myths are real. There was a war. And they're the last two standing.

What do you expect to see from a film titled Godzilla vs. Kong?

Thankfully, director Adam Wingard gives us exactly what we want.

When Godzilla mysteriously starts targeting the USA causing mass destruction, a nefarious corporation entices a Hollow Earth scientist to coerce a Kong scientist to use Kong himself to find a power source that could be the saviour of humanity. However, when Kong leaves the sanctity of Skull Island, the King of the Monsters, Godzilla, wages a war to define who the Alpha Titan is, once and for all. Oh, and there’s some human ‘drama’ shoehorned in to break up the monster mash.

Wingard’s treatment shines through the committee made parts; concentrating on Kong as a protagonist gives empathy, and therefore meaning to the clashes – it is not just two giants bashing each other (think latter day Bay Transformer movies) – and what clashes they are!

The human aspect is a let-down, but only because the real action is with the two titans; even if all the human led parts actually have a flow and every scene builds towards the climax – the real issue is with the whole obviousness of it all – there are no characters, only cardboard cut-outs; even those that have been established in previous movies have little or nothing to do; there are no character arcs, no-one is any different from where they start and there is precious little to even be invested in.

But you know what? It doesn’t really matter. We’re here for the titan smash. Ignore the illogical plotting (Kong getting a literal throne!), forget the nonsensical science (magnetic imagery of the Earth’s interior for just one), don’t worry about the poor acting and lack of characters (all the humans) – just revel in the glorious spectacle of two of the greatest monsters in movie history duking it out.

Godzilla vs. Kong was shot digitally using Arri Alexa 65 and Arri Alexa mini cameras, with resolutions of 3.4K and 6.5K, and ultimately finished as a 4K DI from which this UHD is sourced.

The native DV 4K image is stunning, a combination of finite detail, colour depth, deep blacks and bright highlights reveal a picture that is reference all the way.

Detail is pin sharp throughout, from human skin texture to titan fur or scales, from the foliage of Skull Island to the cityscapes of Hong Kong, from the news scrolling text to the computer consoles of the battleships/Apex command centres; there are keen edges throughout with everything looking absolutely pristine – check out the flight over the refugee camps, or the streets of the cities or overlooking Hollow Earth; absolutely stunning.

The WCG and HDR really add significant punch to the picture, colours are beautiful, whether the natural earth hues or jungle foliage, or the bright neon clad streets, there is a depth and intensity that SD cannot hope to match. Skin tones are natural while the sunsets look gorgeous; the psychedelic light show entering Hollow Earth; the heat from the explosions is almost palpable!

Black level is deep with plenty in the shadows, there is a huge depth to the frame, but it is with the highlights that really push the image; the neon lights are blinding.

Digitally there are no compression issues and the original source is pristine – outstanding picture.

The Dolby Atmos surround track is, like the titular characters, a titan!

Let’s talk about bass. Someone once said, “I’m all about the bass, not treble”, well this track has both, but the bass has layers upon layers with some real subsonic effects that add a weight to the track, seldom heard. The titans' movements, their clashes together, explosions, falling buildings, roars: all benefit from hefty bass - you have to go no further than the opening credits to get some of the best effects, some real Edge of Tomorrow heft!  Of course, all of this would be just an assault if it had no depth, but it has, and the layering is terrific - you really feel the impact of the effects.

All the surround channels, including the heights, get a thorough workout, there is stunning immersion (again I point to the opening, with the wind, water, and inhabitants of Skull Island), but equally in the Apex centres with the alarms and warnings piping up from overhead gets a great thumbs up. The fights are epic, with sound all around, you feel like you are in the action. While quieter moments make use of full ambience. In all this, the dialogue remains natural and audible, never getting lost and given any directionality needed. While the score has its own level within the mix. But you know, sometimes it’s the silence that can be most effective, such as when the H.E.A.V.s first enter Hollow Earth. In all, this is an awesome track, demo throughout and one to really give your system the workout it wants.

Audio Commentary – Director Adam Wingard flies solo with an engaging and enthusiastic chat track that covers plenty of information and his take on the monsters.

Audio Commentary – As above

Godzilla Attacks – 6 minutes with some of the cast as they discuss Godzilla’s legacy and role in the ‘Monsterverse’.

The Phenomenon of Gojira, King of the Monsters – 10 minutes with cast and crew looking at Godzilla’s filmic history, the various iterations, and their favourites.

Kong Leaves Home – 8 minutes with cast and crew discussing this latest version of Kong and his portrayal in the film.

Kong Discovers Hollow Earth – 8 minutes discussing the ‘Hollow Earth’ from earlier incarnations to the depiction here, before delving into the visual aspects.

Behold Kong's Temple – 6 minutes looking at the set (both physical and virtual) of Kong’s throne room.

The Evolution of Kong, Eighth Wonder of the World – 8 minutes of cast and crew reminiscing about their experiences with the King in his various forms.

Round One: Battle at Sea – 5 minutes with cast and crew looking at the fight with an eye towards effects from early pre-vis through to finished product.

Round Two: One Will Fall – 6 minutes, more of the same.

Titan Tag Team: The God and the King – 8 minutes, and even more.

The Rise of Mecha-Godzilla – 7 minutes looking at the various designs that made it to the climactic fight.

Godzilla vs. Kong delivers on what it promises; the glorious spectacle of the two greatest movie monsters duking it out. Sure, its peppered with preposterous science, illogical ideas, no human characters, obvious plot devices and general nonsense, but all that doesn’t really matter as it more than delivers on its premise. By giving Kong a character, there is genuine feeling to the clashes and that is worth the price of admission.

The set is pretty good, the native Dolby Vision 4K image is stunning; being pin sharp detailed, with all-natural colours and incredible blacks with beautiful highlights. And, if that is not enough, the Dolby Atmos track is out of this world, fully immersive and wonderfully layered with subsonic bass. The extras package is also good, covering all you need to know.

Godzilla vs. Kong is available on 4K Ultra HD now.