2014's Pacific Rim, only without the fun 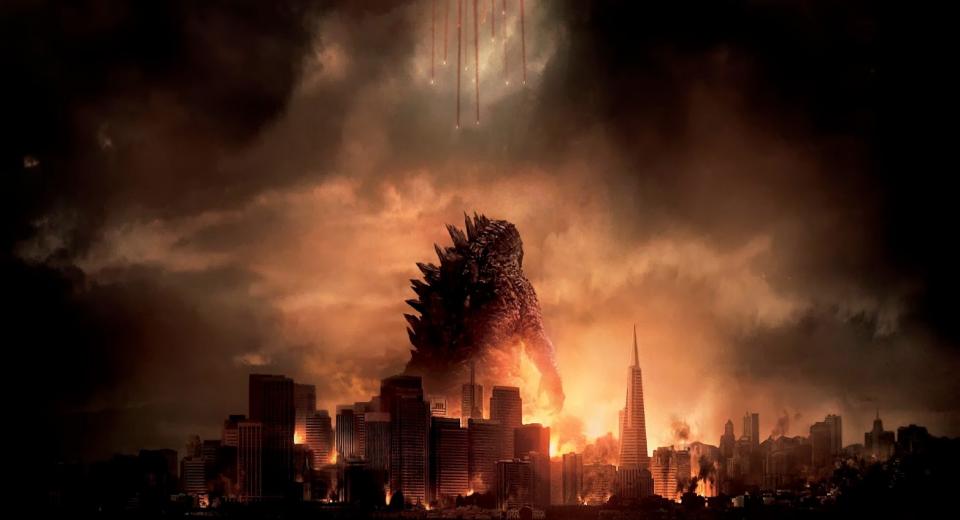 Attempting to balance substantive build-up with grandstanding pay-off, Gareth Edwards’ Godzilla reinvention plays it safe on the middle-ground, and loses both some of the fun to its action elements and the tension to its calm before the storm.

Following his acclaimed low budget sci-fi debut, Monsters, Edwards struck it big by landing this gig, tasked with reinventing and rebooting the Legendary Japanese nuclear-chomping city-stomping monster for a new generation, and thrown a huge budget with which to do it. On the one hand, it should have been a dream deal but, on the other, very few directors are left wholly unmolested by the backing production studios – not since the heyday extravagance of Coppola’s Apocalypse Now and Cimino’s Heaven’s Gate – and this is no exception.
Securing $160 Million to play with, as well as a solid cast, the only issue was the script and, unfortunately, the quartet of successive writers brought in to draft, polish, and rewrite the script could only spell bad news.

But, even without the script and story quality of Monsters, there was still the potential to provide an epic effects extravaganza with some serious Godzilla fury. Unfortunately, with a creature that doesn’t even enter the stage until over an hour into the production, they missed that boat too. Expectations for this movie are probably quite varied. On the one hand, with Edwards behind it, many would have high hopes; on the other hand, considering how Godzilla ended up the last time he hit the big screen, almost anything would be a step up. Unfortunately the trailer teases us with a very different film from the one we get; brooding and brimming with tension, the screen electric with anticipation, the Godzilla trailer showed us the movie that everybody wanted. But not the one we actually get.

For starters, the first act is all over the shop. The opening credits spell the backstory out for anyone paying attention and yet, probably because they figured audiences were that dumb, the film devotes a stupid amount of time to yet further exposition, as a scientist needlessly explains the creature’s entire history once again to somebody who had absolutely no reason to hear it, purely for the sake of the audience. We follow Bryan Cranston going full Shatner (in a stupid wig) and Juliette Binoche (with ridiculous dyed hair), both inadequately made to look a supposed 15 years younger than they actually are, just for the sake of a sequence which attempts some punchy emotional weight but is yet again devalued by a spoilerific trailer.

Soon we’re cutting to present day, and following Kick Ass’s Aaron Taylor-Johnson, a bit of a one-note actor who, unfortunately, we’re saddled with for the entire duration. This would be more acceptable, were it not for the fact that his plight appears to be action-driven rather than plot-driven: he has to go from ‘a’ to ‘b’ for no other reason than because ‘b’ is where the next set-piece is. If you actually take a second to think about the logic behind the plot, the whole thing starts to unravel (Don't even get me started on why Elizabeth Olsen's character is even in this movie, it's just insulting scriptwriting). And that’s a big problem because clearly Edwards wanted the first half to be plot-heavy, and largely monster-free in order to pay-off in the second half with characters you cared about and tension that's been built up.


Without a better script it's asking too much to expect us to wait around for an hour before even showing us a glimpse of the titular beast.

Unfortunately the pay-off doesn’t really come. Edwards has a clear filmmaking style, and it was evident throughout Monsters, but only in parts of Godzilla. His technique of teasing shots of the creature’s back, or his spikes, or just a roar through the mist – particularly as seen through a character wearing a thick gas-mask, is utterly reminiscent of his debut effort, as well as paying tribute to the genre legend, Spielberg, whose own classic Jaws is referenced throughout this piece (e.g. the ‘fins’ tearing through the ocean, or the surname of the lead characters – Brody). He is definitely an accomplished filmmaker capable of distinctive, stylish visions, but unfortunately his style is somewhat diluted, and perhaps even misapplied here. There’s almost no tension in the piece, in part because of the lack of decent character design - there isn't a single character you care about beyond the monster himself, who makes little more than an extended cameo here - and in part because of his very own filming techniques. Whilst short standalone segments (the night bridge sequence) work well, they are relatively few and far between and, more often than not, his cut-away shots – where you are about to see Godzilla let rip, but then a door shuts and blocks the view – don’t heighten your anticipation but instead merely frustrate you. Here he’s not playing around with a low budget character study / romance wrapped up in a sci-fi setting with largely off-screen monsters in the background. This isn’t Monsters, nor is it Cloverfield, and that seems to be the kind of territory that his unquestionable skills would better work in.

And he’s so busy building up the flimsy story and characters-you-can’t-get-behind (Ken Watanabe feels like he was just drafted in purely because he could pronounce “Godzilla” in a way that hardcore fans would appreciate) that, when the action eventually comes, it almost feels too little, too late. Sure, Godzilla’s action sequences are exceptionally well done. The monster designs are excellent – arguably better than Pacific Rim – and offer up imposing menace, and superior physicality. Even if he plays only a small part in his own movie, Godzilla is still a heavyweight presence. But the wait is still a long one.

Better (-chosen) actors put into better roles with a better script shaped around a better narrative might have justified this slow-burn approach, and it could have given the film an added layer beyond just the expected monster-bash mayhem, but, unfortunately, it just feels like wasted time here.


Even Pacific Rim knew what it was delivering to audiences; Godzilla merely appears to sit on the fence.

There’s still a fair amount to enjoy in Godzilla, notwithstanding the rampant criticism levied above. It’s just extra disappointing because it should have been better. And because it should have either had a better story or more pronounced action. But it’s still got qualities that earn it a place as this year’s Pacific Rim; creature designs which are imposing and impressive; epic set-pieces that astound you with their sheer scale; and sequences which remain memorable even if you’d already seen them five times before thanks to another unforgivable trailer. It’s Godzilla, after all, which almost necessitates a trip to see it on the Big Screen. And fans of the classic old movies will find plenty to revel in and plenty to appreciate, with Edwards taking every opportunity to pay his respects and certainly finding the right dark and ominous tone to pervade the piece.

It’s just a shame that he didn’t either get the character-driven story right, as with Monsters, or merely “go big, or go extinct”, Pacific Rim-style, and instead played it safe with a movie that doesn’t achieve greatness in either camp. Still, at least they got Godzilla himself right, and boy is it great to see him back on the Big Screen in all his glory delivering some magnificent building-toppling moves and roaring like only Godzilla can roar. Perhaps that, alone, makes this worth the trip.