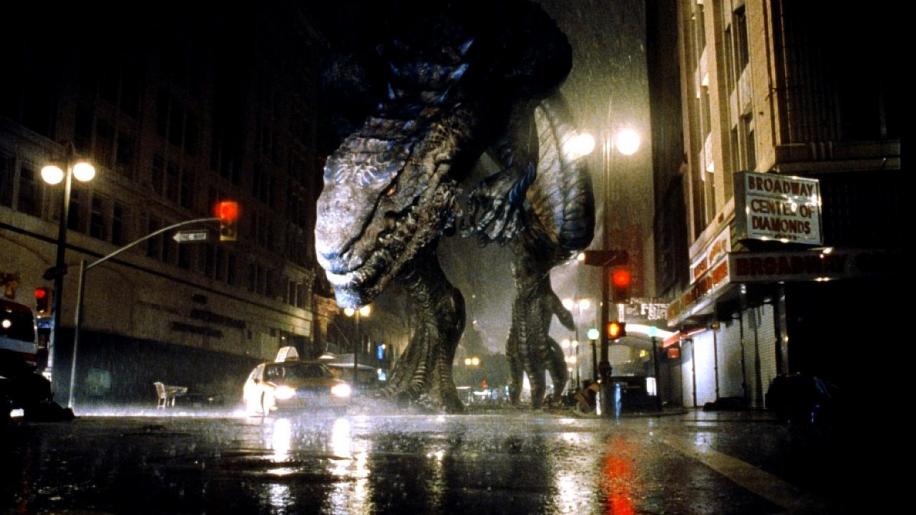 Perhaps you would have expected the manufacturers to pull out all the stops bringing this big budgeter to DVD, but instead we have no more than a serviceable and reasonable image. Blessed with a rather poultry 4.54 Mbps in the bitrate stakes, the image thankfully isn't as poor as its stingy statistics would indicate. Although it suffers from a number of issues which compromise picture fidelity, none are of a serious enough concern to drastically effect enjoyment. The image is a touch soft and occasionally grainy, although nothing too noticeable or off putting to all but the pickiest of observers. Colours are even and solid throughout, and the image does a decent job of keeping the action viable despite the dark and minimal colour palette of the film. Edge enhancements are also evident, but once more not to a degree that they drastically impinge upon the film. This certainly isn't a reference transfer by any means, but it does its job ably enough.

Presented here in a Dolby Digital 5.1 soundtrack, the audio is big and domineering, exactly what is required for a film such as this. The LFE channel is given plenty to do, which it handles superbly, and there is an impressive use of the surrounds to great effect in the action scenes. The track has a pleasingly even mix, with dialogue nice and clear and the effects loud, but never to the point of distraction. The swooping score works to tremendous effect throughout the rears and the special separation is commendable. All in all a very impressive track although am I being a bit picky for expecting perhaps a DTS mix to have made it's way onto the disc? These films live and die by their effects both visual and aural, and considering this is a repackaged new edition, perhaps an updated track wouldn't have gone amiss. There are many discs out there blessed with DTS that haven't got half the opportunities as this film has to display the format to the fullness of its capacity.

For a release proclaiming itself to be a 'Monster Edition' there is certainly slim pickings here. In fact the only thing monstrous here is how this could be conceived as being a special edition in any way. The supplements lead off with a visual effects supervisor commentary, which consists of two members of the effects staff discussing the film and the effects used. The commentary is, unsurprisingly, quite a dry and tech-heavy affair. Each scene leads with the introduction of “this shot was...” and “that shot was...” Understandably this would get tiresome at the best of times, not least when they are discussing a movie that's so outrageously dull to start with. It's disappointing (although certainly not surprising) that they couldn't have tempted anyone higher on the food chain to contribute, and as it stands this commentary is for Tec heads only. Following this is a ten minute segment entitled 'All-time best of Godzilla fight scenes'. What could have been a potentially amusing affair tracing back through the films of the past is instead just a cynical marketing exercise to promote the availability of the other films on DVD and is of little interest. Next up is a featurette on the film, which follows the same standard as all other publicity documentaries of its type. You get some basic interviews with the director (who comes across as Paul Verhoeven but without the brains), and some cast and crew. Pretty basic and unimaginative stuff. Following this is a promotional video for Jakob Dylan's bore-rockers The Wallflowers, and their uninspired cover of Bowies classic “Heroes” taken from the film's soundtrack. Next up is the pretty superfluous 'Godzilla takes New York', which provides some before and after stills of how CGI effects were implemented into the action scenes of the movie. Following on from this are two other stills galleries, one of publicity stills and other featuring production art. Rounding off the extras are three 20min episodes taken from the Godzilla cartoon series. Alas these aren't the Hanna-Barbera episodes I remember from my youth, but instead date from the late 90's explicitly to tie in with the plot of the film. These are no great shakes, but amusing enough if cartoons are your thing and certainly make a better fist of a Godzilla tale than the film.

A wretched snore fest of a monster movie that proves that a bigger budget can't do much to save a stinker. This 'Monster Edition' also comes up short on the supplements, so potential double dippers ought to think long and hard before slapping down their cash on this release. Disappointing on all fronts.