"I'm sorry that Monster Zero isn't *exactly* what you were expecting. But we opened Pandora's box, and there's no closing it now." 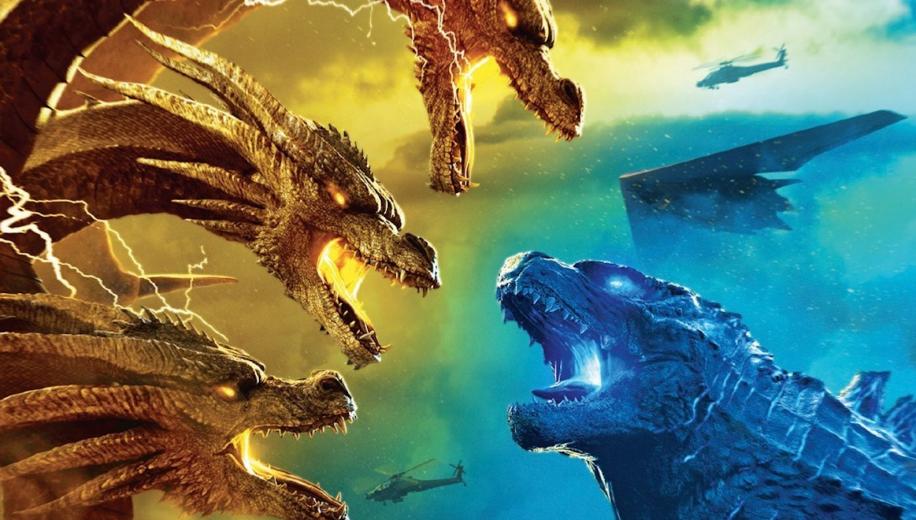 Godzilla: King of the Monsters Review

Legendary continues their MonsterVerse with the epic creature ensemble, King of the Monsters which does what it says on the tin, but barely, and quite badly.

After 1998's abortive attempt at a Godzilla franchise, it took over 15 years to get another Hollywood production off the ground, with Legendary investing in a 2014 reboot and securing Rogue One's Gareth Edwards to direct off the back of his success with his fabulous indie debut, Monsters. The end result was a bit of a mixed bag, failing to capitalise on the titular big beast himself, and also failing to nail the more dramatic character study that they were clearly going for instead. Nonetheless, the Box Office success prompted Legendary to propel their franchise - and, indeed, their entire planned monster universe - forwards with a more effective Kong-themed outing, Skull Island, and a planned future collision between the two heavy hitters, Godzilla vs. Kong. In the meantime, possibly learning from their mistakes, Godzilla: King of the Monsters seeks to give the heavyweight back his crown with a similarly relatively inexperienced writer/director making his blockbuster debut and hoping to wow audiences with a suitably epic clash of the Titans.

Learning from their mistakes, King of the Monsters goes straight for the monster mayhem right from the outset, dishing up a series of new beasties to tear through the landscape, before serving up the one creature who could potentially stop them. It's a classic premise and one which should have been used before in a Hollywood Godzilla movie, dating back to the original Japanese movies and paying tribute to a whole host of them right the way back to the very first.


King of the Monsters isn't content with the simplicity of unleashing beasts , instead overstuffing its unnecessarily complicated narrative with ridiculously contrived motivations

Unfortunately, King of the Monsters isn't content with the mere simplicity of unleashing bad beasts and sending the once-mistrusted Godzilla on a heroic mission to save the world from them, instead overstuffing its unnecessarily complicated narrative with ridiculously contrived motivations. There are elements of both Civil War and Batman vs. Superman in here, unbelievably, as the core family are ripped apart by the devastation caused by the first Godzilla appearance, with Vera Farmiga's doctor seeking to understand the creatures, whilst Kyle Chandler's doctor just wants to wipe them all out, and their surviving daughter - Stranger Thing's Millie Bobby Brown - ends up caught in the middle. King of Monsters throws everything at the story, hoping that few will care when it all amounts to basically an excuse to see a bunch of classic characters duke it out on the Big Screen, with a lot of money spent on some truly spectacular setpieces. But the pathetic storyline does turn lulls between bouts into endurance tests of clock-watching, with characters we really don't care about often called upon to display seemingly sizeable amounts of courage and self-sacrifice, which is all for nought when what we really want to get back to is the Big Fight going off in the background.

Intent on putting you through a now-standard 130+ minutes of movie, the filmmakers have learned their lessons from the first outing - there's definitely more of a Pacific Rim vibe here to the monster mayhem, for the better - but still seem intent on trying to deliver that action in a faux-epic narrative, when it's thin, contrived and completely unnecessary. When it comes to King of the Monsters spectacle, this Godzilla movie delivers what it says on the tin; you just have to put up with all the hollow frills to get to see what you came for.


Godzilla: King of the Monsters makes its UK 4K Ultra HD Blu-ray bow courtesy of Warner, matching up to their identical preceding US release. Despite the ostensible limitations of the digital intermediate, the format's enhancement tools win out, delivering a largely stunning upscaled 4K presentation.

Blending film and digital, this is an, at times, surprisingly 'gritty' looking film, with those softer edges and distinct focal points distinctive to filmic shoots and specific lenses. Nonetheless, don't let the stylistic flourishes fool you, there's plenty of fine detail on offer here, with added texture ensuring something of a satisfying upgrade over the 1080p Blu-ray counterpart. The creatures are impressively rendered, and spark to life even more palpably here, and close-ups and clothing, as well as the distinctive sets, get fine presentation.

As usual, WCG and HDR, here Dolby Vision, all come into play to enhance the image and leave it well and truly set apart from the already impressive standard SDR Blu-ray, literally breathing life into the monsters and their wonderfully vibrant, often energy-based powers, with the colder penetrating neon blues juxtaposing the bronzed yellow flame look, and eventually distinguishing the heroes and villains in the process.

The accompanying High Definition 3D object-based immersive audio is Dolby Atmos in flavour, and it's absolutely one of the best tracks of the year; every bit as good as it was on the film's Big Screen run.


One of the best tracks of the year

Dialogue is keenly delivered, as you would only expect, getting prioritisation throughout despite the fact that it's not in the least bit important, whilst the score - as intermittently generic as it may be - keeps on at you to remind you of the tense thrills that you're supposed to be experiencing, trying its best to paper over the story and editing gaps, and given the best possible opportunity to do so courtesy of this stunning track.

Of course, it's the effects that will literally land home, with so many thunderous monster footfalls that you'll need surveyors to check for structural damage. LFE is positive seismic, and the directionality impressive as it whips up a storm across the array, bringing winged beasts into play with a sky full of fighter planes, punching holes in your walls with the deafening roars, blasts of fire and energy, and futile attempts at heavyweight human munitions. When Godzilla almost literally explodes into action in the finale, it's pure demo magnificence, rounding out a stomping aural presentation.

Aside from the Audio Commentary, none of the other extras are ported over onto the 4K UHD disc itself, requiring a flip to the Blu-ray to dip into them.


The extras are pretty decent

Nevertheless, the extras are pretty decent, headlined by that aforementioned Commentary from the director and a couple of his crew, whilst a succession of reasonably substantial Featurettes (the longest of which is over half an hour) focus on the sequel's narrative, its key creatures, their powers; the main locations, the characters, weapons and mythology (curiously juxtaposed with 'reality'). There are also a few nice Deleted Scenes worth checking out and some Trailers.

When it comes to King of the Monsters spectacle, this Godzilla movie delivers what it says on the tin; you just have to put up with all the hollow frills to get to see what you came for

Godzilla: King of the Monsters's UK 4K Ultra HD Blu-ray disc affords us stunning 4K video, complete with Dolby Vision enhancement, as well as utter reference Atmos, and with a decent selection of extras, this is a very good set for fans to pick up.