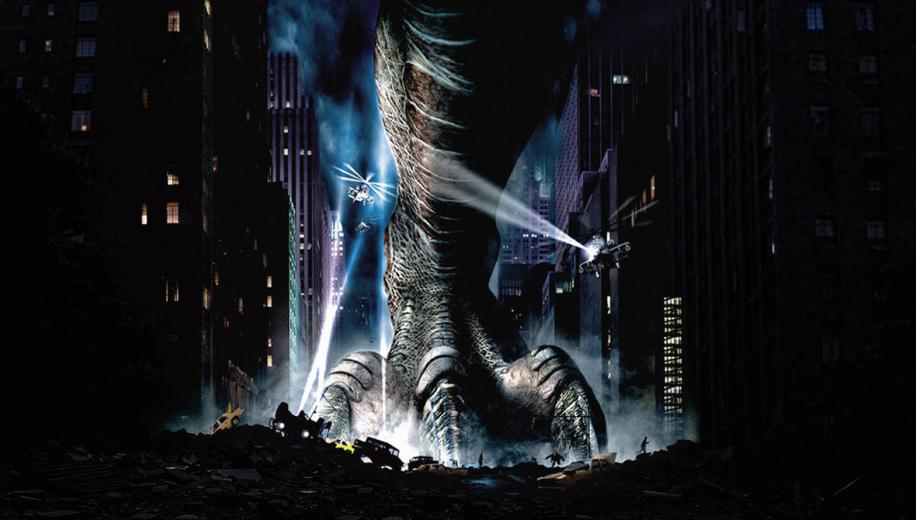 Back in 1998, TriStar had actually planned a trilogy of Godzilla movies and was so certain that the first would be successful that they bought the sequel rights from Japan's Toho Studios. The production did not go quite to plan, however, losing its original director Jan de Bont (coming off the back of his one-two directorial debut hit run of Speed and Twister), who was replaced by Emmerich, himself coming off the back of Independence Day.

The original script involved an alien monster on the loose, necessitating the creation of Godzilla to defend mankind against the attacker, but when Emmerich joined the project he had his own plans, maintaining that he wanted to do his own take, but ultimately returning to what was almost exactly a retread of the original Japanese origin movie: big mutant monster, triggered by radiation (with a nod to Chernobyl that seems timely what with the excellent HBO series currently playing), destroys a few shipping vessels, goes on a rampage in a city, defies all military attempts to stop him, is hunted underwater unsuccessfully, before a final confrontation.


Despite clearly being one of Emmerich's worst films, Godzilla is harmless bottom denominator disaster entertainment

Casting Matthew Broderick in the lead seems like an immediate mistake, and even Jean Reno (enjoying his post-Leon success after Mission: Impossible and before Ronin) can't handle the tonal imbalance of the script, which posits a terrible Mayor in the centre of a flimsy excuse to destroy half of Manhattan, and seldom has you doing anything but rooting for the creature - which would be fine in a different movie, but Emmerich wants this to be his Lost World, right down to the David Arnold's insipid score that so desperately wants to evoke Jurassic Park beats.

Despite clearly being one of Emmerich's worst films (although that actually award very definitively goes to Independence Day: Resurgence), and despite being utterly incapable of sustaining a sequel, let alone trilogy (despite the feeble setup - which actually spawned a follow-up animated series), Godzilla is harmless bottom denominator disaster entertainment, enjoying a few nice setpieces (the Apache attack, and the sub hunt) as it literally tears through the Big Apple. It's hard not to wonder, however, what it would have been like had they stuck with the original script, and perhaps the upcoming King of Monsters will finally settle the score.

Godzilla comes to UK Ultra HD Blu-ray courtesy of Sony, delivering a suitably impressive native 4K presentation that appears to match its preceding US release, and is ultimately only really let down by the inherent limitations of 1998 effects work.


Unlikely demo material, this is a very good presentation indeed

Brimming with dark, mist- or rain-strewn night shots ripe with spotlights and torches playing out their hazy beams and with shadows rampant across the piece, Godzilla is hardly prime demo material and yet Sony's 4K disc is intent upon proving otherwise, defying its largely muted stylisation by delivering excellent refinement, some quite startling clarity and depth and texturing which will likely leave fans using the old Blu-ray disc as a coaster. Indeed, the image is often so good that it only further highlights the unquestionably dated effects that define the piece.

The colour scheme enjoys a few bursts of colour, in early warmer locales, or under the red lighting of the attack submarines, but mainlines on a darker shadow-ridden nighttime style which it handles extremely well, as warmer fire-spawned oranges light the faces and cooler blues bring the torches to life; black levels remain largely defiant no matter how dark the proceedings get. Unlikely demo material, if you can ignore the glaring effects, this is a very good presentation indeed.

Emmerich's monster disaster romp also enjoys one hell of an upgrade on the aural front, earning itself a 3D High Definition immersive audio track in the form of Dolby Atmos. Taking all the helicopter-chomping, sub-smashing, city-stomping mayhem, it proves to be a tremendously effective audio track.

Whilst dialogue maintains priority across the array, getting clear and coherent dissemination throughout, it's hardly an important component in comparison to the effects. Indeed, even the remarkably generic score - which, as aforementioned, spends far too long riffing on other, better movies, and simply trading in unremarkable beats - hardly holds a candle against the effects work, getting keen presentation but playing distinct second fiddle to the thundering foot-stomping chaos. LFE is key, giving depth to each of those footfalls, whilst missiles, torpedoes and explosions galore ignite the soundstage. Godzilla's signature screech remains memorable and tears across the array and, overall, this is an excellent Atmos offering.

Godzilla's UK 4K Ultra HD Blu-ray release enjoys very little in the way of extras on the 4K disc itself, instead leaving almost all of the supplemental material to the accompanying Blu-ray, which matches up in content to the previous Blu-ray release from a decade ago.


Very little in the way of extras on the 4K disc itself, leaving almost all of the supplemental material to the Blu-ray

Headlined by an Audio Commentary by the visual effects supervisors, we also get a Behind the Scenes Features, a look at the best Godzilla fight scenes, as well as a trivia game, music video and a whole bunch of Previews.

Bottom tier Emmerich is still loosely entertaining; flimsy, formulaic but expectedly chaotic viewing that affords plenty of cityscape destruction and a few nice creature-centric action setpieces, even if there's very little here holding it all together or justifying its existence.

The UK 4K release of Godzilla delivers perhaps somewhat surprisingly excellent native 4K video and Dolby Atmos-enhanced audio, provides all of the extras via the accompanying Blu-ray disc, and remains a solid purchase for fans.