If you’re trying to kill a god, you’d better not miss… 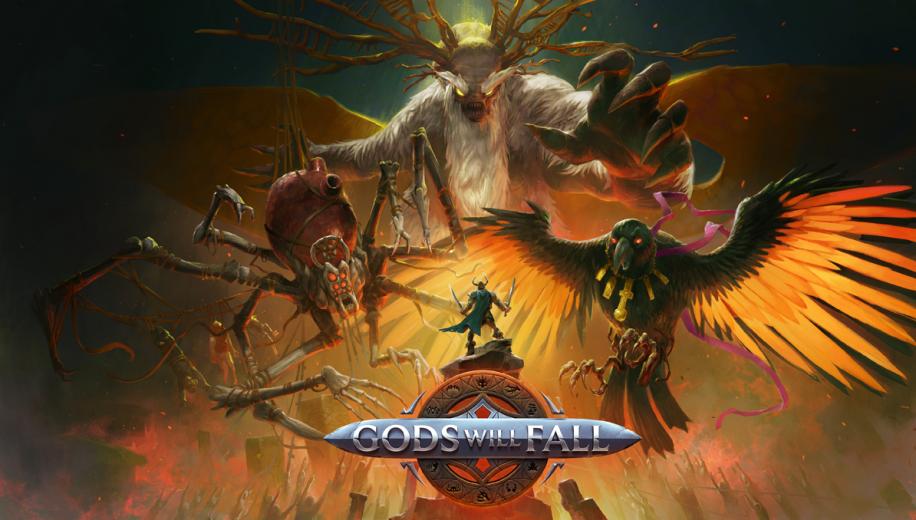 With the inevitable lull in major new launches through December and the New Year, there’s always scope for a few indie and lower-budget titles to make a name for themselves. Gods Will Fall is one such example, not least because it offers something that was commonplace in ye olde days of gaming but not so much in the modern marketplace: a genuine Game Over screen. This isn’t one of those ‘you’re dead, let’s go back to the last checkpoint’ kind of screens that horror games like to revel in. It’s very much a case of ‘you’re dead, we’re going back to the main menu because you’ve got to start all over again from scratch’. In fairness, you do get eight lives to play with, or, to be more specific, eight Celtic warriors who are leading a revolution against their tyrannical gods. In gameplay terms, this equates to 10 boss battles, of significantly variable difficulty, each housed at the end of a dungeon-like raid.

Should one of your warriors fall in combat they are trapped within the dungeon for eternity. However, if you send any of their comrades in after them and are able to defeat that particular boss, then everyone makes it back out alive. If all of your warriors wind up falling (in one or more dungeons) then, no matter how many gods you’ve slain or hours you’ve sunk into the game, you’ll have to start over from the very beginning. Unlike the majority of games where death has no real meaning besides being a mildly brief irritation, this adds an intriguing psychological element to Gods Will Fall, that can be both absorbing and exasperating.

The core gameplay falls into that ‘easy to play, tough to master’ category. It’s a simple hack and slash adventure in essence, with a limited set of controls that never over-complicates matters. Light and heavy attacks can be blended with a jump button (also used for basic platforming), along with a parry/dodge option and that’s about it – but it's effective and frequently fluent, and in places you can slice through a line-up of enemies in a fairly straightforward manner. However, with a variable difficulty that seems to be randomised from one dungeon to the next, and in turn with each playthrough (changing both the toughness of the enemies and the warriors in your team), it can also be incredibly easy to die if you let your guard down. We died instantly after mistaking a tree-top for a platform (all big falls are fatal), and in one early level we lost one warrior to just four hits from the lowest of grunts because we waded in care-free and they simply countered our opening attack – and so the tougher enemies certainly warrant a little patience and some tactical smarts, with some nice risk-reward elements in play.

Whether you enjoy or simply endure it, Gods Will Fall is a strangely compelling adventure”

For example, the parry manoeuvre requires to you dash towards an enemy when prompted by the tell-tale glint of their imminently attacking weapon. Time it right and you’ll stagger them for some easy hits, or you can follow up with a second dash move to pin them to the floor, just ripe for a skull-smashing heavy attack. But it can be, quite literally, rather hit and miss, and failure can leave you open to some health-sapping blows. It’s great when it works, but more often we found it preferable to play it safe by simply using the button to dodge the attack and counter from the sides.

Another welcome risk-reward element comes into effect when your health has dropped, via the game’s Bloodlust mechanic. On a basic level, landing hits on an enemy builds up your health meter which needs to be manually refilled via the left trigger, with each hero having a differing number of bars to top up. The trick is that the more health you refill the greater the effect of the subsequent Bloodlust, ranging from a small damage boost for filling one bar, to a near full-on berserker mode if your health was low and you string a longer sequence of kills together. So, do you play it safe and top up your health one bar at a time when you can? Or do you risk death by running your health into the ground in order to get the maximum Bloodlust effect around the next corner? In the same manner, it can also pay to run away from a tougher mini-boss mid-fight to mop up a few easier kills in order to restore your health before returning with a Bloodlust buff to finish the job.

Heroes, Just for One Day

Each playthrough gives you a different selection of eight warriors, each with varying health, strength and speed stats, plus potentially a skill perk that can give them a damage boost or some other bonus trait. Not only does this give you some warriors that are distinctly better than others, but their weapon selection also plays a significant role, whether that’s tied into your own playing style or how you’re better off playing with that particular warrior.

Twin blades or a slick sword are more likely about fast light attacks, while a heavier mace will be slower but do a lot more damage, and a spear is a great long-range heavy weapon that can keep the majority of foes safely at a manageable distance. One nice touch lets you pick up the fallen weapons of your foes, either to use as a temporary melee weapon, or more likely as a one-off throwable. Added to your armoury are some temporary perks that are randomly hidden away in each dungeon, such as traps, explosives, health packs, stats boosts and so on – although these do feel a little underplayed as they could have been a little more fun, or at least added to your tactical combat options a bit more. One brilliant touch is that the warriors have also been given an element of personality. Before heading into a dungeon, your chosen warrior will display bravado while being cheered on by their brothers and sisters in arms. If they make it out alive they’ll be given an even louder cheer, but if they fall then the remaining warriors will be shown slumping in sadness – to the point where some will be notably demoralised with a drop-off in their stats. Likewise, some warriors might fear a certain god and fare worse in their domain, while conversely others might see their stats boosted by a desire to avenge a fallen comrade or determination to rectify a previous failure.

It’s not always a huge deal, but it does make you think about your next choice to send into the fight. You might find a couple of favourites who’ll become your go-to heroes and go ‘top heavy’ in order to clear each dungeon as quickly as possible. But there’s also merit in sending in one of your weaker warriors to effectively scout ahead so you know what to expect – and killing enemies can weaken the god ahead of the final battle, so exploration is definitely worthwhile. If they manage to slay the big boss then that’s a welcome bonus, but if they fail then you know you’ve got some better-equipped heroes ready to learn from their mistakes.

The one real issue is that there can be a sizeable difference in difficulty from one dungeon to the next. It’s not so much the floor-dwelling enemies, which you’ll eventually figure out over time with signature attacks that you’ll quickly learn to avoid, but more the gods themselves – and there’s no real way of telling until you’ve played through the level to meet them (but some will always be tougher than others). Some are oddly easy to beat, needing little more than 20 or 30 seconds of button mashing and the odd dodge or Bloodlust boost to defeat – which seems curiously opposed to the Dark Souls-like epic battles you might have been expecting. But, on the other hand, some of the gods will have more complicated moves and far more deadly attacks that can make it incredibly hard to even land any attacks of your own until you’ve figured them out. Of course, in this modern era you can no doubt find plenty of help and pointers online, but for those who prefer the challenge of figuring it out themselves, it can become quite the grind replaying a 20 or 30-minute level just to lose to the same boss eight times in a row – and then end up having to restart the whole game from scratch. Though we should note you can bail on any dungeon, and perhaps find an easier one to complete after which you can upgrade your warriors with better stats, improved weapons and new skills before returning to offer up some tougher competition.

For a relatively low-budget title, Gods Wills Fall isn’t exactly going to stretch your AV system, and certainly a heightened audio performance could have added some drama to the action. Visually it’s far more impressive, even if the slightly cartoon style may seem rather at odds with the dark fantasy theme. But each location somehow manages to feel scenic, often beautiful, while also holding that sense of oppression and impending death (and it might just be us, but a few had us thinking of Destiny 2’s backdrops?). The fixed camera works both for and against the game, swooping in and out quite nicely for some cinematic flashes, while also hindering your viewpoint should an enemy wander behind a rock or pillar. But there’s plenty of colourful variety to the level design that keep things bright and interesting, even when body parts are falling from the skies and a giant rat is plunging a spear into your spine.

Such is the nature of Gods Will Fall that opinions will invariably differ. The seemingly simplistic gameplay coupled with the need for repetition and frequently infuriating defeats means that it’s obviously not going to be a lot of fun for everyone. Even those who do like a challenge might not be entirely convinced by the lack of depth to the combat or your tactical options – but there’s still something oddly addictive at play here.

Gods Will Fall is the kind of game that you might love for an hour but then hate an hour later – only to fancy another crack at the title the following day. The slight randomness of characters and difficulties can add some replayability, but once you’ve figured out the boss battles and beaten it once, we can’t imagine it being something you’ll play often – but whether you enjoy or simply endure it, Gods Will Fall is a strangely compelling adventure, and one that could be worn as a badge of honour for those who do finally get to see the ending rather than just yet another Game Over screen...