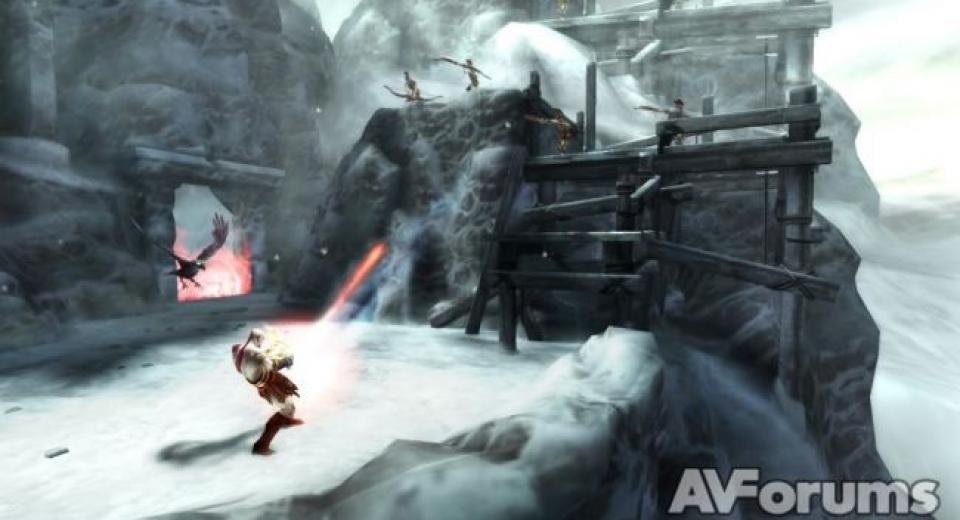 If you look up the term ‘unsympathetic protagonist’ in any respectable video game writing guide, don’t be surprised if you see Kratos’ irate face scowling back at you. Sure, he’s got good reason to be a bit cross — after all, Ares did trick him into killing his wife and son — but his bloodlust is insatiable, and predates his time in the (former) God of War’s servitude. It’s no surprise then, that Ghost of Sparta sees gaming’s angriest man once again murdering his way through Greek mythology. The story takes place just after the original PS2 game; Kratos has usurped Ares as the God of War, but is plagued by visions of his mortal life. He sets out on a quest to find his brother, setting the scene for a much more personal story than those of the previous games. Ready At Dawn brought God of War to the PSP in 2008 with the critically acclaimed Chains of Olympus, but that was before the series had made the jump to a current-generation console. Ghost of Sparta is released in a post-God of War 3 world, which will unavoidably impact how the game is viewed. You’d be hard pushed to find a hand-held game that looks and sounds as impressive as Ghost of Sparta. Animations are fluid, locations are beautifully realised and the bosses and mini-bosses are as intimidating and awe-inspiring as you’d expect. Getting the camerawork right on a small screen was never going to be an easy task, but Ready At Dawn have managed it very well. Angle transitions are smooth, and the point of view is almost always where you’d want it to be. Clarity is sometimes hampered a little by the intense on-screen action, but it’s rarely so bad as to be frustrating. Gerard Marino and Mike Reagan’s original score significantly contributes to the experience. The music is not just the usual background noise that gets increasingly ignored as the game progresses, it’s a vital part of creating the atmosphere and really shines throughout. The presentation of Ghost of Sparta is totally in keeping with the rest of the series, and shows definitively how far the PSP can be pushed in terms of visual performance.
Ready At Dawn have added little to the mechanics of the other games in the series. There are a few new magical abilities and the like, but they’re really token gestures and don’t change the core gameplay. That’s probably for the best: the God of War control system has always been solid, and works just as well on the PSP as it does on consoles. The boss fights won’t be too taxing for most players, but the Quick Time Events are as satisfying as they’ve ever been — the joy of slamming the Blades of Athena into an eye, mouth, or somewhere equally unpleasant will probably never wear thin. The occasional puzzle (in the loosest sense of the word) is inserted to break up the frenetic pace, but they’re by far the weakest element of the game. Had they not been so uninspired and easy, they could have really added an extra dimension to the experience, but as they stand they’re simply inconvenient. The result is an excellent action adventure game, punctuated by very short bursts of tedium. It’ll probably take eight hours or so to complete Ghost of Sparta on the default setting. Increasing the difficulty to ‘Spartan’ will add a few hours to that, and there’s also a ‘God Mode’, which serves the needs of the more masochistic gamer. Ready At Dawn have also thrown in a number of Challenge Rooms, which should provide some additional entertainment, along with unlockable armour that may encourage further playthroughs. It’s notable how little Ghost of Sparta deviates from the traditional God of War experience. The lack of originality may leave some veterans of the series cold, especially if God of War 3 is still fresh in their minds, but many will feel that Ready At Dawn have made the right decision in sticking to the formula that’s worked so well for the franchise in the past. In addition, the inclusion of one of the most well-rounded stories of the series is particularly impressive, especially in light of how ambitious the project is from a purely technical perspective. The developers have really added some depth to Kratos’ character in this game.  Ghost of Sparta is a thoroughly enjoyable hack-and-slash title, let down only by a few weak puzzles. It’s as close to a must-have for the PSP as you’re likely to find, and a worthy addition to the God of War series.

Ghost of Sparta is a thoroughly enjoyable hack-and-slash title, let down only by a few weak puzzles.