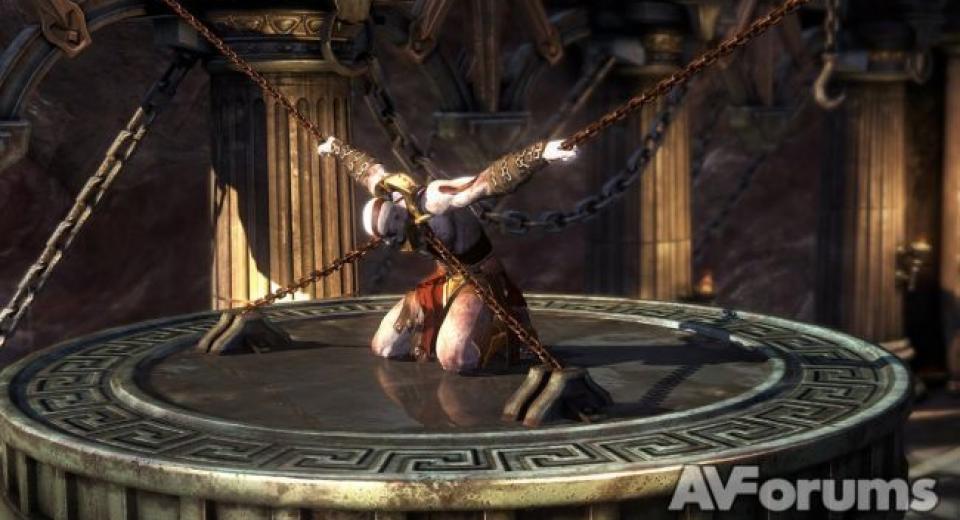 As you come to the end of a console life cycle, the bonus counterpoint to the inevitable outlay all gamers have to begin weighing up, is the quality of the titles on the existing hardware. There’s usually one last push by the big guns to shift as many units of their now reduced-price machines, and this is largely driven by exclusives; fine tuned with polished visuals rinsing every ounce of horsepower out of the hardware. Coming from Sony’s own Santa Monica studio, God of War: Ascension is one such example.

If you played God of War 3, you’d be forgiven for thinking the protagonist, Kratos, had finished his journey. Well, you’d be right, but new heroes are rarely sure-fire money spinners, so Ascension takes the form of a prequel, charting the Spartan warrior’s plight during his bondage at the hands of the Furies, following the breaking of his oath to Ares, the God of War. In truth, the natural resources of Greek mythology, used for the backdrop to these epic tales, have been mined to breaking point, and unless you paid close attention in Classics class you’d be forgiven for asking whether they were just making these names up now. It’s GoW storytelling by numbers at this point, best summed up as “angry man is still angry”. The gameplay follows the same “if it ain’t broke, don’t fix it” vein, with free flowing combat and buckets of blood to boot. Combo attack your enemies like a whirling Dervish, trigger quick-time-events to dispatch them in particularly brutal fashion and collect the orbs their deaths bring in order to level up your weapons, regain health or magic. On your travels you’ll once again seek out chests with Gorgon’s Eyes or Phoenix Feathers which, upon the collection of five of either, will increase your overall health/magic bars. It’s all very familiar and easy to get to grips with, but there are a few tweaks. All the while, the non-controllable camera will be zooming and panning to evoke a cinematic experience, aiming to give you the best shots of the gorgeous backdrops.

And boy are they a sight to behold. The series has built a reputation for being a true AAA title, particularly in the looks department and Ascension carries this mantle adeptly. The shimmer and subtle lighting effects (the underwater section is stunning) are back, and the trails on Kratos’ blades - most notably the sparkler effect triggered after enough rage has been built up - are a veritable fireworks display of translucent colours. As ever, this being the PS3 and all, aliasing still pops in and out, but it’s kept under wraps and negligible in the face of the sheer smoothness of the action, as the animation doesn’t miss a beat, the frame rate remains steady and there’s no unsightly screen tear. The audio, however, is the weakest of the series thus far, and needs a bit of tinkering whether on TV speakers or through an amp, and the Dolby Pro Logic II track is a bit of a let-down when held against the highs of previous entries.

Tweaks have been made, the QTEs have been streamlined and there’s now a variant that doesn’t offer button prompts. The latter keeps you in the cinematic action, but the mixture of the two is a bit schizophrenic, as one (no prompt) engenders the feeling that you should be pressing buttons if in doubt, whilst if you do so and a prompt appears you’ll fail the QTE. Combat has had a similar minor addition rather than an overhaul in the shape of discarded weapons from enemies that can be utilised. The arsenal is predictable - heavy and slow clubs, projectile spears and jack-of-all-trades swords - and whilst the idea behind adding a bit of variety is commendable, they remain secondary to your Blades of Chaos in almost every sense; invariably too slow for large, quick groups of enemies, only the spear proves of use to spam attack those beasts the camera has unhelpfully cut off from your gaze. If anything, Ascension feels less combat-oriented than previous GoW games, with many chapters pushing puzzles and platform elements to the fore. The new Amulet of Uroboros, capable of time manipulation and thus decaying or healing previously decayed objects is the one standout feature for these head-scratchers. The effects are eye-catching, with the iridescent objects floating through the air and assembling/disassembling. It has niggles with targeting though, and that brings us to the wider issue of the camera.

God of War games have always been about the epic; mythological battles set against grand architecture and sweeping environments of either lush resplendence or terrifying hells filling the screen. By putting scope at the forefront, each game has taken on the battle of oneupmanship, and the opening sections of Ascension border on jumping the shark. The camera pulls out so far that controlling your microbial anti-hero, hidden somewhere in the midst of the screen, comes down to button bashing whilst trying to ascertain which weapon-wielding flea you are. It hits the right note in terms of making your jaw hit the floor, but the teetering balance of gameplay versus spectacle gets a bit lopsided, which is why the middle sections, where puzzles and perfunctory platforming dominate some chapters, come across as far more boring than they probably should be.

The camera is king here, sweeping and straining for unique flourishes and angles - sometimes to the detriment of your view - it’s the main mood setter.  It dictates just when you should be wowed by the vista-porn on display and when you should forge ahead. Blindly following the hand-holding pointers won’t help you plunder all the chests and artifacts dotted about the place though, so exploration is expected of you. Most instances are merely a case of heading in the opposite direction to the one sign-posted for you - if the camera points to the left then see what’s on the right. However, due to the door-closing-behind-you mechanic, sometimes this is easier said than done if you’ve picked the wrong route; barred from a quick backtrack by hidden barriers, even reloading the last checkpoint is a rug pulled out from under you as the game autosaves at every opportunity. Luckily, getting everything is for completionists only, and not necessary to best the game. As with all God of Wars, the narrative-driven campaign means the design is base around easing the difficulty and straightforward gameplay, however linearity isn’t a criticism; style over substance is only a negative if the balance is hideously out of kilter. Ascension still feels slick in battle and the difficulty is easy on Normal, hinting that replaying should be an option, but for the first time the franchise looks less appealing to play through again. The invisible walls channeling you towards an objective (that due to the weak story you’ve likely forgotten) are becoming far more obvious. The underwater section is a perfect example of the kind of plateau of game design Santa Monica have aimed for here - breathtakingly beautiful but in gameplay terms can be distilled down to “hold left stick forward”.

A likely admission that the existing formula is starting to fray around the edges is the inclusion of multi-player, you begin by choosing an affiliation to one of the gods, each offering different combat skills. The tie to the main game being that you swear a blood oath, and can’t simply switch between styles. Not that they are particularly distinguishable, other than the magic abilities bestowed.

There are four modes to choose from. Team Favour of the Gods is either 4v4 or 2v2, and sees your team aim to amass the most points by way of opening chests, racking up kills and capturing altars.   Match of Champions (8/4 players) is a deathmatch free-for-all and Capture the Flag is pretty self explanatory. Rounding things off there’s Trial of the Gods, a survival mode that’s intended for 2 player co-op but also allows you to go solo. A bit odd for a multiplayer mode, but when you consider experience points and levelling play a major role in how successful you’ll be - what with armour and ability unlocks - this could be seen as an easy way to grind when the lobbies aren’t overflowing. It’s all quite chaotic fun (especially when the beasts appear or Capture the Flag played out against the backdrop of a Cyclops) but it’s very much a lightweight tactical battle where spam attacks and sticking together pave the way for success.  It’s a pity then that for the team games new players don’t seem to slot into vacated slots with any expediency; in 2v2 that can be a killer.  The hectic nature of it all, coupled with the wider camera, can make it hard to keep track of when you’ve correctly blocked or landed an attack as it’s a blur of colour in a maelstrom of limbs, but at least the levelling offers some longevity in lieu of the campaign’s obvious limited replay appeal.

God of War: Ascension is a good game, but it’s hard to avoid the elephantaur in the room - it’s probably the weakest home console outing for everybody’s favourite grimacing Spartan.  The adventure feels lopsided and poorly paced, with a story that’s scraping the barrel of well-known Greek mythology. Perhaps it’s a victim of timing, coming at the end of the PlayStation 3’s life-cycle and likely the last title before a series overhaul, Santa Monica add in incremental changes - such as a multiplayer mode - which half work, but they seem to have come at the expense of uniformly polished and inventive level design.

It’s still enjoyable for the easy gory combat and cinematic views - the latter chapters in particular - but the constrictive nature of its gameplay is just not as well handled as in other outings, with meaningful and testing battles too sporadic.  As such, the AAA graphics and grand spectacle become the main draw rather than just the icing on the (centaur entrails-filled) cake.