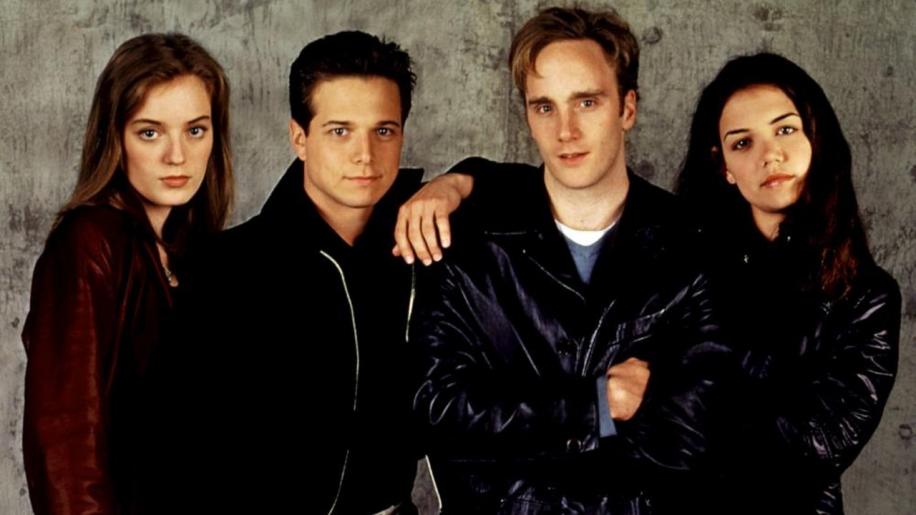 Non-linear movies and films shot from multiple perspectives have been popular on and off over the decades, but it was not really until the success of Pulp Fiction that they came back into fashion for the modern generation. The concept has been done before, time and time again, with classic auteurs like Kurosawa making masterpieces like Rashomon which focussed on telling a story from several different perspectives, but Pulp Fiction gave it a cool new shine, becoming an instant classic and spawning many imitators since, some successful and some less so. Of late, we have had award-winning movies like Crash to exploit the style, as well as less well received thrillers like Vantage Point, which used the style as more of a gimmick than a tool for telling a more complex story. But back in the nineties filmmakers were still finding their footing in respect to this kind of production. And five years after Pulp Fiction we got Go, one of the more prominent little films which utilised this form of interwoven storytelling.


On Christmas Eve, a disparate set of individuals get into varying amounts of trouble mainly thanks to a relatively small drug deal that goes wrong. Ronna, Mannie, Simon and Claire all work at a local supermarket. When Ronna agrees to take Simon's shift while he secretly takes a trip up to Vegas, she inadvertently sets in motion a series of events that sees both her and her friends, and Simon and his friends get into a whole world of trouble. In Simon's absence, the remaining trio take it upon themselves to broker a drug deal between a couple of young small-time TV soap stars, Adam and Zack, and Simon's volatile dealer Todd. Leaving Claire as a 'deposit' whilst she conducts the deal, Ronna and Mannie have to contend with both the authorities and an angry drug dealer, whilst figuring out a way to get their friend back from the unpredictable Todd. All the while, Simon and his buddies encounter some amount of grief during their hedonistic trip to Vegas. Making new friends - and enemies - the many different parties involved all cross paths along the way.


The benefit to this specific style of multi-arc story-weaving is that the multitude of characters are almost all given their opportunity to develop somewhat and indeed occasionally even shine. And Go is all about character, showing how the butterfly effect shapes these individuals' lives, taking them in new and unexpected directions. It may have been done many times since, but back in 1999 this still felt like a fresh, involving method of storytelling.


The characters here are mostly bigger than the actors who play them - mainly because the cast were all but unknown back then. And a simple exercise in looking at stars before they headlined movies would show that most had fairly inauspicious beginnings. Often embarrassing teenage efforts, whether in horror films or as child actors, bit parts in bigger movies or recurring roles in daytime TV shows, even their early movie performances were mostly best left forgotten given their subsequent success.


Here we have a mixed bag: from ex-Grange Hill kid Desmond Askew - who has subsequently all-but disappeared from the Big Screen - to hero of Deadwood and villain of Die Hard 4, Timothy Olyphant, who showed promise even in his early performance here as the dodgy drug dealer Todd. In between on the scale of subsequent success there's a Dawson's Creek-age Katie Holmes as Claire, the girl who gets left behind with Todd, and Dawn of the Dead's Sarah Polley as Ronna, the ostensible leader of the pack. William Fichtner, cameo actor from the like of The Dark Knight and almost all of Bruckheimer's movies, gets an extended cameo here as a cop who causes trouble for Adam and Zack. And Adam and Zack themselves are played by now unknown ex-TV star Scott Wolf (Party of Five) and ex-comedian/impersonator Jay Mohr (who you'll probably recognise, but not be able to remember what from). Go brought them all together and gave them all solid parts, and in spite of the fact that some with be remembered and some will be forgotten, they all did their jobs well here.


Although Director Doug Liman went on to lay the solid foundation to the excellent Bourne Trilogy, it's his origins doing the hilarious Swingers (with Vince Vaughn and Jon Favreau on top form) that truly served him well with Go, where he sharpened his skills at painting this type of drama, where unfortunate and often surprising events commonly befall the central characters. Never less than entertaining, Go will still probably always remain a mildly amateurish offering by today's standards, but taking it more as some ill-advised cross-breed of Hollywood aspirations and Indie exploits, it stands quite well against some of the better in both of those different leagues.


Of course it has not aged fantastically. Despite the passage of a mere decade (which is nothing when you consider many of the more memorable movies that came before it), Go was definitely a product of the times, and without any of that Tarantino panache that has made Pulp Fiction something of an ageless classic, it suffers with dated music, clothes and a generally passé feel to the whole proceedings. That's not to say there isn't a certain amount of nostalgia to be felt here, as Massive Attack, Eagle Eye Cherry and Lenny Kravitz all chip in to a score by BT. The raves may look silly by today's flashy standards, but many of us still remember these roots, these beginnings.


Go is an enjoyable little film, occasionally a little too smart-mouthed for its own good, but never pretentious. It's cleverly interwoven, non-linear, multi-stranded tale of several individuals who all collide around Christmas-time certainly engages for the duration, and remains fun, intriguing and interesting despite being low-key, low-budget and slightly dated. For the Go generation, plenty of fond memories will likely come flooding back with this movie, and it also a higher point in the early part of many of its stars' careers. It will never be a classic, never stand alongside Pulp Fiction or Crash - whichever you may regard more highly - but it has its place nonetheless.