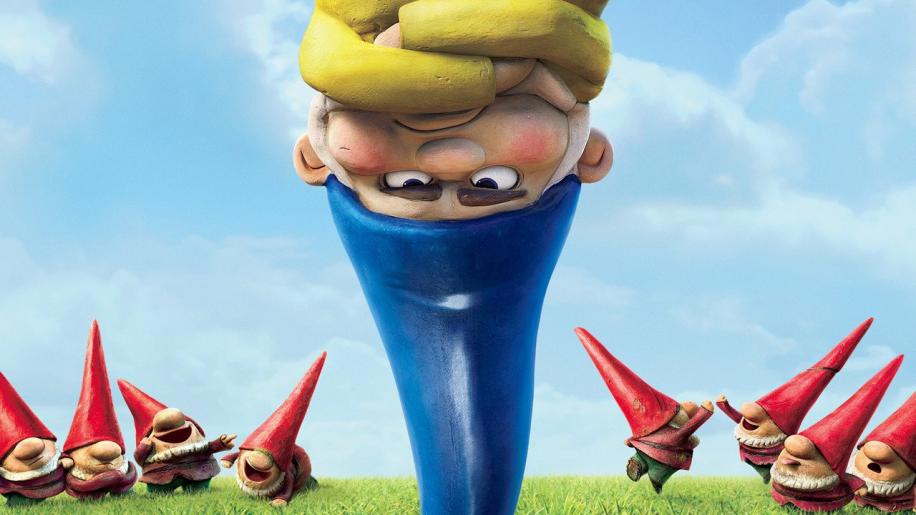 Perhaps the most famous Shakespearian quote, and one which, whilst referenced, is not from tonight’s interpretation of the Bard’s, arguably, most famous work; the much interpreted, much re-made and much envisaged Romeo and Juliet. In fact, the story is so well known due to its many interpretations over the years, that the film-makers acknowledge this at the very beginning of the film, when a small gnome, in a ‘jokey’ way outlines the back-story to the unfolding events – it is a scene purely there to service the younger viewers, those that have yet to experience Shakespeare’s work, and thus will need a preamble to grasp the initial concepts of two warring factions, the very backbone of the tragic story – but to those that have even the slightest knowledge, the scene is a waste of screen time as the very next cut (beyond that of the door numbers, the aforementioned 2B and not 2B) encapsulates everything you need to know – neighbours that despise each other - Miss Montague and Mr. Capulet (in a very direct reference to the play) and whose hatred has spread to their gardens and the gnomes and ornaments that spring to life, Toy Story style, once left alone. In the Montague corner we have the Blue’s, while the Capulet’s fight in Red - distinct colouration to give a distinct line that needs to be crossed when our two, eventual, protagonists meet.

During the early part of the film the rivalry between the two gardens amounts to taunting and a lawn mower race between the two young ‘bucks’, each vying for top position to, thus, put the other into shame. The red corner is dominated by Tybalt, voiced with typically gruffness by Jason Statham, who imbues the nastier side of this gnome with his best ‘Two Smoking Barrels’ cock-a-nee sparra inflection. During the race, and to force us to side with the Blue’s, Tybalt cheats his way to winning and in doing so destroys the opponents mower; this builds up even more resentment between the two factions and it is from this point on when things become distinctly more aggressive. The Blue side is headed up by Gnomeo, voice with charm and panache by James McAvoy. He is the dashing hero, loyal to his garden, his mother and his friends, with enough drive to head up the revenge party and see it through to the end. Or he would do if it were not with a chance meeting with a female ‘ninja’ gnome, as they both (romantically) scrabble for a ‘Cupid’s arrow’ orchid in a disused and disowned adjoining garden. The ‘ninja’ is of course Juliet voiced with simple allure by Emily Blunt, whose chemistry with MaAvoy is actually pretty good, considering it’s all in the voice. This brief scene lets us know all about the titular characters; they are brave, reckless and adventurous; both seeing in each other a kindred spirit, someone to spend life with – that is until a quick submersion removes their respective disguises and both are hit with the realisation that they reside on opposite sides of the fence; Gnomeo is Blue, Juliet is Red, how can they possibly be together when their respective families are locked together in a never ending feud? An age old story huh?

The rest of the film plays out in a typically child friendly fashion with the inevitable bumps in the road to the obvious happy ending, stark contrast to the play! And I guess that’s my biggest problem with this production; it is played too obviously towards a child friendly audience – the gnomes coming to life (having been done much better by Pixar’s first film), the bright colours, the easy flirtation that is ‘love at first sight’, the revenge motifs used to bring out the ‘drama’ – there is nothing truly gripping about the plot, nothing substantial to engage – yet – the film is rife with in jokes and references that are way over a child’s head and meant to appeal to a wider audience. Trouble is all I did was groan and think that, that wasn’t for the intended audience; think of the aforementioned door numbers, if you don’t know the quote you won’t understand the reference, and just about every pun is in a similar vein – if you don’t have a knowledge of Shakespeare, of the many variants on his work, you simply won’t get the ‘jokes’. To make matters worse the film-makes are aware of this fact and are at pains to alleviate it by bringing to life more and more characters to widen the appeal. A bronze statue of Shakespeare, voiced by the magnificent Patrick Stewart who sounds like he is having an absolute ball with his lines, chats gleefully to Gnomeo about his predicament and how similar it is to one of his own plays and how it all ends in tragedy! No way that was ever going to happen in a child friendly version, no matter how long they protract the ending mayhem.

Astonishingly the film is credited with two original story writers, six story writers and a further seven screen play writers, and that is not including the Bard on whose play this whole thing is based. And it is a testament to the director Kelly Asbury, who brought Shrek 2 to life, that he manages to produce a coherent and flowing story with so many ideas on the table rather than a bunch of set pieces simply strung together. He does this by eschewing all development in favour of one dimensional characters and a simple linear plot. Gnomeo is a bold loyal hero, Juliet is a rebellious daughter sick of being treated as precious. Their over protective parents have single lines to their behaviour that tell of other parental loss, which goes no way to explain away thier respective behaviour. In fact, the single most developed character is a pink flamingo pond ornament called Featherstone, whose brief interlude story provides a welcome amount of empathy to the mass frivolity – without giving anything away, it's a kind of like Manny's back-story in Ice Age that comes out of nowhere and adds a significant amount of empathy to the film – but this is quickly forgotten in a ‘Skippy/Lassie/Flipper’ segment (again you need to know the shows to fully get the joke) that returns the film well and truly back on track ...

What the film does have going for it is a gaggle of voice talent that bring to life the many character in the film. Apart from the leads we have the dulcet tones of Sir Michael Caine whose very over protective nature as Lord Redbrick, Juliet’s father, is a catalyst for the love-story. Maggie Smith adds her own appeal as Gnomeo’s mother Lady Bluebury, whose soft goading inspires Gnomeo to take the risks that he does. Nanette, Juliet’s best friend, the water squirting frog ornament is played with wild abandonment by Ashley Jensen, probably best known for Extras, while her love interest, a spectacled gnome called Paris is voiced by the joint director/writer of that show Stephen Merchant. Benny, Gnomeo’s best friend, is voice by Matt Lucas, while the smaller part of a Fawn, a fawn ornament, is brought to life by none other than Ozzy Osbourne, in one of the few voices I actually didn’t recognise! Bit parts are even given significant voices, I’ve already mentioned Patrick Stewart as Shakespeare, but with an even lesser part Dolly Pardon gives life to the aptly names Dolly gnome who has only one line! The voices of the house owners are given to Julie Walters and Victor Meldrew himself Richard Wilson and these two old pros bicker like nothing else, wonderful stuff. All these terrific names aren’t asked to do much, but that’s just a function of the script which does not ask for much!

I must also mention the score, which is credited to Chris Bacon, James Newton Howard and Elton John, who also receives an executive producers credit, and when you hear it you will know why – simply put the score is a string of Elton John’s hits either re-mixed, natural, or orchestrated, from Saturday Night’s Alright for Fighting, to Sorry is the Hardest Word, there is pretty much every one of Elton’s biggest hits themed in some way to the story narrative. Amazingly for such an obvious pander I didn’t mind at all, and felt that each tune was used sparingly and when orchestrated did actually add to elements of the film. I wouldn’t say the same about the title songs the much publicised duet with Lady Gaga and Nelly Furtado’s take on Crocodile Rock, but the less said about those the better.

So, after the credits have rolled, is the film any good? Well, on balance I’d have to go with no, simply because the whole thing has a ‘made by committee’ feel to it – it casts its net far and wide trying to catch as many punters as possible, but ultimately it’s a shoddy net that allows just about everything to escape. Too childlike in its simplicity for an adult to be fully entertained. And too up itself to be absorbing as a kids film.