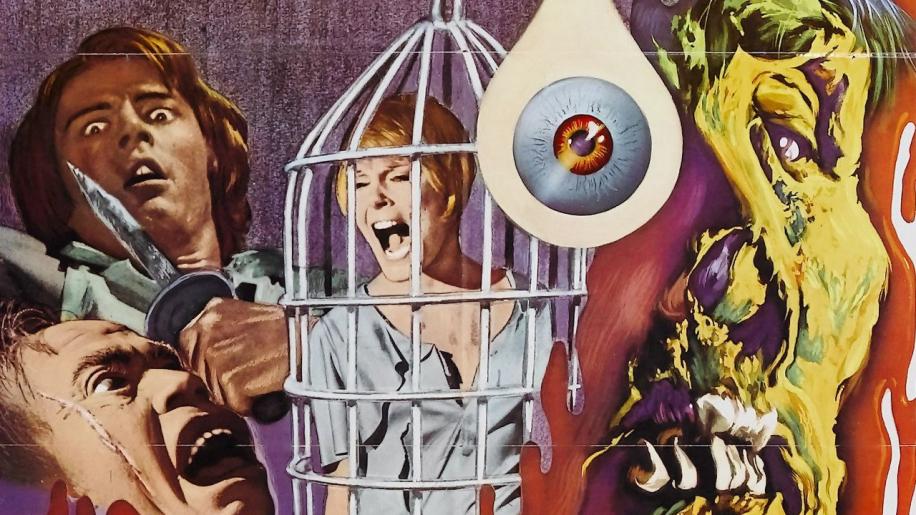 To those of us that revere the horror genre, there are very few names that rightly deserve the moniker of ‘Godfather’. Very few individuals have shaped the format to such a degree that they have pioneered the art and defined all those that came after. Murnau is one, Whale another, both shaping horror as we know it today. Amongst such illustrious names a well-known Italian cinematographer would soon forge his own path. Coming from artistic stock, his attention for detail, for getting the best out of a limited budget and fashioning pure eye candy by creating atmosphere would see him burst onto the scene with imaginative use of light and shade, colour and design and image framing. It would take time, as outside of his native Italy he was at the mercy of American distributors who would latterly squander his efforts, but eventually the name Mario Bava would become as hallowed as all the truly great cinema giants. And tonight we will take a look at one of his lesser films, a film that was butchered by its American distributor upon release, but still managed to become one of his most successful and well known; Gli orrori del castello di Norimberga (The Horrors of Nuremberg Castle) or as it is better known in English: Baron Blood.

The film opens to a Pan Am (remember them?) Boeing 747 jumbo flying through the clouds, before showing us the inside of the aircraft as we watch a fellow descending the stairs from first to economy class in what is reported to be the first film to show this (then) new aircraft. Our intrepid passenger is Peter Kleist, an American returning to Austria to discover more about his family ancestry and more specifically about the infamous Baron Otto Von Kleis who resided in the castle overlooking the town, and whose torturous and fearsome reputation earned him the title Baron ‘Blood’. The castle is in a state of disrepair and is gradually being restored as a hotel by entrepreneur Herr Dortmund along with the talents of a female architect to try and preserve the integrity of the place. The first few scenes are nearly all pure exposition to explain the legacy of the Baron, the castle and the main protagonists all of whom are introduced in very short succession and whose clunky dialogue seems all the more forced for it.

Peter is played by Antonio Cantafora and he is supposed to be a dashing American returning to his home, but he seldom displays those characteristics associated with a leading man – it is as if dashing has been thrust upon him. The fact that all the troubles start and end with him hardly lends credence to his aspirations of being a hero, even if he does (somehow!) get the girl. The girl in question is Eva Arnold, who has somehow risen through a very male dominated architectural world to become top of her field in castle restoration. She is given life by the delicious German born actress Elke Sommer who was making quite a name for herself and still had plenty to give. The part as written has very little for Sommer to do other than look pretty and be the damsel in distress both of which she nails to a tee. But her constant wining and shrieking in fear are completely at odds with her character when first introduced. So her second scene has her frightened by the notorious practical joker Fritz, the caretaker of the castle, just to show that she is still a woman and needs to be helped out of a fix; we’re in 1972 remember, people?

It is later at dinner that we find out Peter’s true motivations for coming back to his ancestral home – he has found a parchment reported to be an incantation to bring back to life the long dead Baron and he wants to raise him to gain some insight into what it was like to live hundreds of years ago (he is, after all a history scholar). So that night, he and Eva do just that – cue wind, thunder, mist, diabolical dealings and supernatural horror until Eva becomes too scared and begs Peter to recant the incantation and stop the Baron from appearing, which he reluctantly does. Up until this point the direction has been rather ordinary, the head on a pike prank notwithstanding, but it is with the scroll reading that Bava opens his lens to some very dark delights. Skewed camera angles and light and shadow all come into play to create a genuine sense of unease, spoilt only by Sommer’s wild eye antics. Unfortunately for the townsfolk, but fortunately for us, Peter was not satisfied with that result and wants to try again only this time the scroll is blown into the fire and destroyed so that the retraction incantation can no longer be used and the Baron finally rises from his grave. This second rising is even better than the first for sheer terror, Bava skews his angles even further, and manages to heighten the tension by not actually showing anything except a door bulging and blood seeping underneath it. Hats off to the man. Reminded me very much of Robert Wise’s The Haunting (1963) in its execution. Despite all the evidence to the contrary Peter remains unconvinced that the ritual worked, while Eva is in no doubt.

The Baron wastes no time in getting up to his old tricks and quickly dispatches just about anyone who comes into his path including those who are in his home! The local constabulary are at a loss to explain the sudden spate of murders, and with the head of the hotel project also a victim the whole enterprise collapses leading to a sale of the castle to the highest bidder. Whilst I have no problem with the details, the speed with which these events occur is quite breath-taking, no sooner is the body of Dortmund found than the whole site is up for sale and bought by the mysterious Alfred Becker, a character who will bring about a great deal of misfortune to all those that are near him. The part of Becker was originally to be given to Vincent Price and it is easy to see why; a megalomaniacal wheelchair bound aristocrat, whose sense of menace is palpable, and whose plans are dark, twisted and doom laden – everything a Price character (from Phibes to Hopkins) is noted for. Taking the role was character actor Joseph Cotton who seems to be channelling Price in his delivery and demeanour and was so good that it gave his career a boost into horror. Bava wastes no time in giving him centre stage so that even if our protagonists aren’t aware we, the audience, instinctively know something is off about this character.

As the death toll begins to rise, Eve seems to be singled out by the Baron and on one fateful night he menaces her, seeking to end her life. In essence what follows is a simple chase scene, but in the hands of a master it becomes so much more. With terrific use of fish eye lenses, hand held camera work, light, shadow, mist and colour Bava ramps up the atmosphere to near unbearable levels. It might seem old hat to look at now, but his innovation of holding the camera on a terrified face (see Blair Witch for example) or shaky cam chasing a shadowy figure (see just about any modern film) and the sheer audacity of the lighting bring a true sense of unease to the piece. Fortunately Eva manages to escape but the experience helps her convey her fears to both Peter and his Uncle, both of whom are convinced that the Baron has indeed risen. They then enlist the help of a clairvoyant to contact the witch who placed the curse on the Baron in the first place to try and find out how to stop him. Receiving an amulet and enigmatic instructions that those who raised him only have the power to stop him, it is up to Peter and Eva to try and work out how to put an end to the horror that has descended on the castle.

Baron Blood is quite a curious title, it harks back to Bava’s earlier witchcraft inspired films but came at a time when the horror tide was beginning to turn in favour of more ‘youth’ orientated scares, with it being one of the very first to accommodate a ‘young’ cast against horrors of ‘old’. The mantle would of course be taken up by the Hollywood machine which would continue to churn out such films for years (still does as the Evil Dead re-make testifies), but where Bava wins out over most is with the atmosphere he creates; even so, Baron Blood, by his own and surrounding standards, does seem extremely tame. The Baron’s deformed make up, despite being bathed in shadow, does look very rubbery and not, if I’m honest, very scary. There is very little in the way of over the top gore anywhere on show within the film – save the opening and closing of the Iron Maiden which did have a very brief skull crush on closing and sticky mess once opened. But the murders are sadly missing any decent pay off even though they are built up to deliver it. The climax too, whilst grim and depressing, is missing any explicit gore, even if it does contain an iconic picture (see image 1). Compare a similar climax in Mike Reeves’ Witchfinder General which was rich with wanton splatter. There is also a curious lack of nudity for an Italian horror, or any horror of the time for that matter. With Sommer as the only girl on the cast, she was never going to bare anything (she never did), but there was opportunity for the doctors svelte secretary to bare something, but unfortunately not. With a lack of any gratuitous gore or nudity, Baron Blood, then, does sadly not live up to any reputation and this may ultimately lose it fans.

But you cannot deny the visual aspect though, shot almost entirely on location in Burg Kreuzenstein, Austria, Bava makes full use of the castle for both establishing, landscape and atmospheric shots. Indeed some of the most spectacular camera work is taken from the towers overlooking the town of Leobendorf below – and when juxtaposed with a mutilated body hanging off a spike, it makes for compelling viewing. There is no doubt that with Bava’s eye for framing an image, and his imaginative use of light, colour and shadow the film’s atmosphere is what sells it. Being an Italian production it does have dubbing issues, but it has those if you watch it in its original language too – actors often spoke their own language on set and were dubbed afterwards, it was a very common practice. Stelvio Cipriani’s imaginative score works within the film, but his opening and closing themes seem, at first, woefully out of place in a horror film, but it is this upbeat motif that leads you into a false sense of security, almost a ‘shock’ tactic. It’s something that the American distributors disagreed with and they replace it, in its entirety, for the international release.

Having said all that, Baron Blood, despite having laudable and lofty ideas, and being filmed by one of the genre greats, does suffer from being somewhat dull. But what I do like is the pure audacity of being an extremely simple story and telling it very simply – man returns, devil raised, people killed etc. there is no pretention or superfluous elements, it’s pure and unsullied, something that modern (horror) films could learn from. If only it had gone a little bit more over to the top with the boobs and blood …