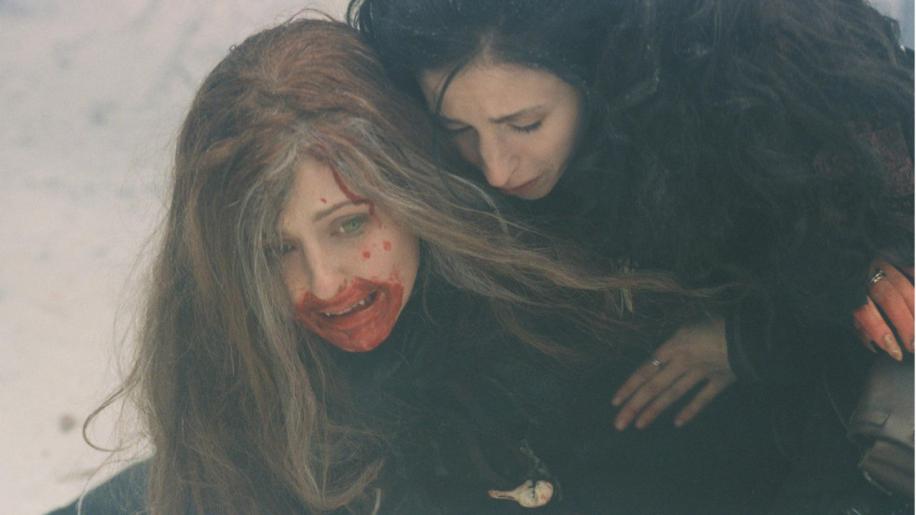 Ginger Snaps Back: The Beginning Movie (2004)

The third in the cult horror series, this sequel is also designed to stand on its own two (or possibly four) feet. This is fortunate since, before seeing the movie, I hadn't had the opportunity of catching the first two.

Set 175 years (or so) before the first movie, “Ginger Snaps Back: The Beginning” aims to show us how the girls family lines came to be cursed. As the film begins, we meet Ginger and Brigitte riding through eerily deserted and snowbound woodlands on horseback. After their horse becomes spooked, the girls dismount to lead him onward and find an Indian encampment which has been attacked. The sole survivor, an old woman with the gift of “sight”, presents the girls with an animal skull pendant each and informs them that they must “kill the wolf boy or one sister will kill the other”. The girls leave but soon Bridgette is injured and they seek solace in a trading company fort where, as they soon discover, the evil that's inside is just as dangerous as that which lurks outside.

I mentioned earlier that I hadn't seen the first two instalments in the Ginger Snaps series, this alone usually instils me with a feeling of doom. With few exceptions watching a sequel (or prequel in this case) to a movie, without first seeing the original is usually a confusing experience. Filmmakers rarely retread or expand characters back stories, instead choosing to present more of the same mix and leaving newcomers slightly baffled by the experience (take a bow “The Whole Ten Yards”). So what about this prequel then? Well, whilst you won't find any complex back story here, the movie avoids the usual pitfalls by keeping the history of the girls (or their ancestors in this case) mysterious. They inform the occupants of the fort that their parents where killed in a shipwreck but, once alone, they conspire to ensure they keep their story consistent, suggesting that this may not be the whole truth. Dark throughout, the movie attempts to maintain a feeling of apprehension and suspense which, overall, works well. The low budget (although higher than the first two movies) has been used to good effect here with some convincingly shot footage of cursed man and beast dispatching the motley crew of the fort in traditional horror, one-by-one, fashion.

Unfortunately there are times when the movie does feel lethargic. Although running for a modest 94 minutes some sections seem to drag a little with poor character development and occupants of the fort who seem to serve no purpose other than to be dispatched in as gory a way as possible (such as the leech scene). In one of the deleted scenes we find out that one of the occupants is a cartographer who tries to dismiss the legends of the werewolf as mere “old wives tales” despite his sketches of wolf-like creatures. Sadly, this scene was excised from the finished movie leaving almost none of the supporting characters with any real character arc and, what development there is present, seemingly only serving to punctuate the need for a characters grisly end.

So, in summary, what we have here is a solid little horror flick. Reasonable monsters (“Wolf Boy” make up aside), a self contained storyline which leads well into the existing movies and some good old gore. It's not perfect, but for a third outing it's pretty entertaining.