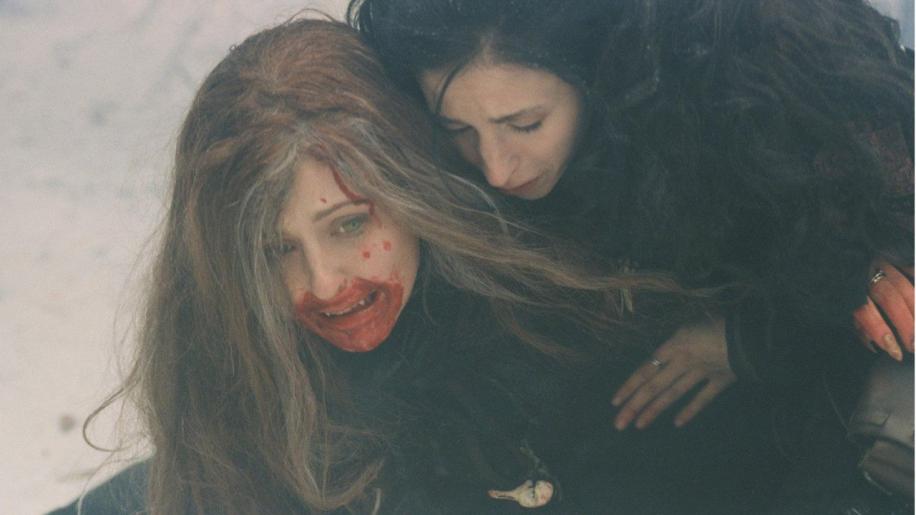 Presented in 1.85:1 anamorphic widescreen, the transfer on offer here is somewhat of a contradiction in terms. Whilst the usual “horrors” of macroblocking, edge enhancement and ringing are absent, the transfer veers toward looking very soft although there is noticeable print grain throughout. The overall effect does work remarkably well though since the movie has been filmed using a very muted colour palette (presumably to contrast the arterial red on offer). Available here we have the usual Dolby Digital 5.1 or, more unusually, a separate English 2.0 Dolby Surround track. These separate tracks are becoming rarer now that DVD players can downmix a full on 5.1 surround track to matrixed surround but it's interesting to note that, in this case, playing the movie through a Dolby pro logic II amp produced a better mix with the separate Dolby surround mix than by having the player downmix the 5.1 track. But I digress. The 5.1 mix is not too shabby with some good use of the split rears to increase the feeling of unease. Dialogue is clear and well balanced (if a little locked to the centre) with the whole mix adding to the feeling of tension and apprehension throughout. This isn't going to make your top 5 surround demo discs list but it's a pretty good effort for a low(er) budget sequel. So, what goodies do we have here? Well, let's start with the deleted scenes where you'll find four scenes that where dropped from the theatrical release. All can be viewed with or without a director's commentary (explaining the reasons for their excision). Unfortunately (as seems to be the vogue at present) these scenes appear to have been taken directly from the on camera video feed (or very poor quality rushes) and have been very poorly encoded, leading to an almost VCD like quality. The first of the four “Old Wives Tale” lasts 1'38” and expands on the character of Milo. A short deletion, I thought it was sad this was lost since it added to the feeling of isolation with the fort being on the verge of (then) unexplored territory and also gave Milo a little more character than that of expendable exposition, ah well. The other three scenes “Extended Dinner Scene” 7'02”, “You Lie” 2'17” and “Extended Burial Scene” 2'08” don't seem to have been too much of a loss with “You Lie” seeming to have been a pivotal scene to remove as it changes the character and motivation of the chief and, if left in situ, would have made the ending rather confusing.

”Grant Harvey's Video Diary” is , well, a series of extracts from an on set video diary. That's pretty much it. Running for just under ten minutes we hear Harvey talking about aspects of the movies pre-production and filming and get an irreverent look at the director. With the normal aim of such features being to boost the directors ego, this is a short, but refreshing little featurette. Next up we have “Wolf Boy” 1'54 which takes a look at the make up tests for Stevie Mitchell's “Wolf Boy” character and some test footage of a stunt sequence featuring the character. This is a little too short to be of much interest and (if I'm honest here) dwells on the least convincing make up of the movie. Whilst the werewolf effects are, generally, to a high standard in the movie the “Wolf Boy” prosthetics aren't and the end effect should really have been used in a “less is more” way to hide the shortcomings of the make up effects.

”Blood, Guts And Fire” 8'34 takes us behind the scenes to look at a couple of the movies death sequences, showing how prosthetic arterial wounds, fake blood and acting all go to make the Ginger Snaps experience, hmmmm lovely. Production Design 5'15 and Costume Design 3'20 are pretty traditional featurettes showing the work that went into preparing the real locations and studio sets for the movie as well as the research and artistic flair that went into the costume design. Penultimately we have “Behind The Scenes” 2'04 and “Fun On The Set” 3'42. Now this is weird. “Fun on the set” (obviously) is the longer of the two and takes a look at some of the gaffs, blunders and bloopers that went on during filming as well as showing us some members of the cast having fun. The weird part is ... so does “behind the scenes” in fact they even share some of the same footage. The end result (especially if you watch one after the other as I did) is a feeling of deja'vu and it left me wondering why they didn't just make one 5 minute feature. Odd.

Finally we have a commentary track featuring director Grant Harvey, writer Stephen Massicotte, and editor Ken Filewych. This is a pretty good track both to listen to in one sitting and also to dip in and out of. There are plenty of scene specific comments as well as comments on the editing process and little vignettes regarding the actors. I know most people (except us reviewers) don't listen to commentary tracks but (along with Clerks) I'd recommend that anyone interested in low budget film making gives this one a go. Surprisingly good. I came to this with a feeling of “Oh no, the third instalment in a low budget horror series” but I enjoyed it. Enough, in fact, to seek out the first two movies “Ginger Snaps” and “Ginger Snaps: Unleashed” to see what I've missed. Supposedly Grant Harvey saw the movie as a “dark fairy tale”, a description which fits the end product admirably. Definitely recommended for a rental and, if you're a fan, to keep.