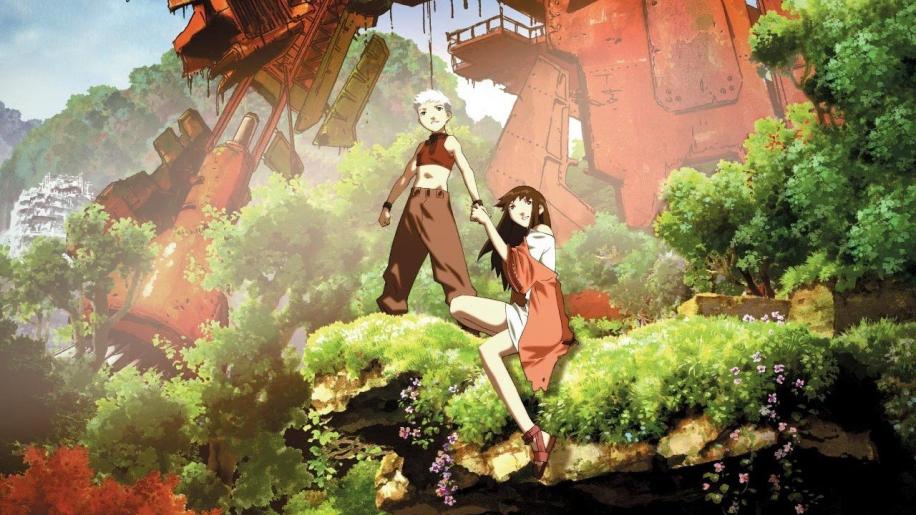 Visions of a dystopian future have fuelled the anime and manga media for some time now. Whether those behind such stories believe we are unable to comprehend such tales if they were set in present climes is unclear. What is patently obvious however is that this setting allows for an almost infinite amount of possibilities, which is something anime in particular pins much of its appeal upon. Being an animated medium, the limitless scope for artistic invention is only held back by the creator's imagination, and what better backdrop to place such musings in than one which resembles our own world and yet holds further mysteries and boundless scenarios for adventure. Thus, we come to view Origin: Spirits of the Past - a story set in a - wait for it - dystopian future!

Brought to us by Studio Gonzo, this is their first feature film and also marks the debut for director Keiichi Sugiyama in the field, though it should be noted that the studio are responsible for some of the biggest anime series hits around with titles such as Samurai 7 and Solty Rei amongst their previous output. Supposed to be happening some three hundred years after an apocalyptic series of events, the initial foray into this world will be fairly familiar to many who appreciate anime. The usual trappings are all present and correct, with the introduction of a central young male lead, who appears to us by way of a “hey let's race each other to X” sequence where high jinks between him and his friend ensues and the overall air of joie de vivre is established. The youth in question is Agito, and it is through his interactions that we come to find ourselves learning of this odd neo city he and others inhabit. Full of crumbling facades and overgrown plant life, the township rises into the sky like a monolithic modern day skyscraper, yet is defined by its lack of power. It seems that after the end of civilization, people gathered here to create a different kind of infrastructure that relies heavily upon feudal farming techniques, mixed with scavenging the wreckage of destroyed buildings for handy goodies.

Not all is safe and cosy in this new Eden though, as the sprightly Agito's amusing race to the bottom of the giant water source reveals. This is considered beyond limits for a reason, as it seems the area has been split into factions that each have their own agenda. No sooner has he splashed down than the Druid-like forest people make their presence known, displeased at the interloper's intrusion into their territory. The need for water in this time is bargained for by the humans, who have formed a fragile treaty with the Druids not to intrude into the forest, and in return they are to be granted access to the water they need for survival. On the other side of this triumvirate is the militaristic nation of Ragna. They have eschewed any thoughts of peaceful negotiation in favour of sheer might, intending to take the forest and all it holds by force. It is between the woodland and the industrialised Ragna that Neutral City lies, the homeplace of our hero and a teetering balance that keeps the opposing sides from each other. It doesn't take a great deal of analysis to see that the central themes of the story revolve around the themes of nature, misguided progress and environmental responsibility.

Some have drawn parallels to the Studio Ghibli anime Nausicaa of the Valley of the Wind and it isn't hard to see why, though pedants would point to the 1984 classic technically not being a Ghibli production as it was made before the creation of the studio, it is still considered by many to be the first of their offerings and is indeed included in certain DVD collections with other Ghibli works. Both contain messages about environmentalism and are set in a post apocalyptic future. Both have figures that are a pivot between warring factions of naturalistic and militaristic persuasions and both develop their story by bringing to light the existence of a long forgotten artefact, a relic of the previous age that could give great power to whichever side discovers it. This though is where the writing and direction of Miyazaki came to bear fruit for the Ghibli piece and where Origin essentially falls down.

The early scenes of joviality and youthful fun are well developed. They are paced with a fine balance between the need to get to know the characters as well as giving viewers a clear glimpse of the world they inhabit and what the possibilities of the sci-fi/fantasy backdrop offer. When Agito finds a survivor from the past age, a young girl seemingly encapsulated in a state of suspended animation, the shift towards a tone of discovery is subtle and intermingles well for some time with the burgeoning relationship that develops between them as well as the ramifications on their small group of friends. However, as soon as the nation of Ragna enters the fray, the gentle musings of a thoughtful adolescent relationship drama are swept aside in favour of more simplistic action sequences. The way in which such anime stories connect with their audiences often relies upon the everyman appeal of the central character. Think of the greats, such as perhaps the highest rated classic of the genre Akira, would they have stirred such empathy if their lead figures like Kaneda were anything but ordinary in nature?

Around halfway through Origin, the mood changes remarkably, and not for the better. Gentility and subtlety are utterly destroyed by what at times approaches an onslaught that is more akin to a cheap made for TV American action cartoon. Devoid of thought and remorseless in its ability to undermine all that has gone before, there are few occasions that I can think of when a film has been spoiled in such a complete manner by the latter half of the film. Not wishing to give too much away, suffice it to say that the identifiable teen protagonist that is vulnerable, and one assumes must be quick thinking in order to defeat his enemies of almost limitless power, is soon imbued with the kind of strength that destroys any real tension that was created beforehand. This could have been delivered in a manner that would have been palatable if it were not for the score. The opening sequence presents us with such an immense and beautiful aria that it leaves us little prepared for the Wacky Races audio that accompanies the moments of supposed true drama.

What started out as a potential eco warrior tale of David versus Goliath soon turns into little more than the Jolly Green Giant meets Captain Planet. There are a few interesting questions posed by the nefarious character who intends to destroy the world but they are too little too late, as the seeds of this film's destruction have already been sown by that point. What could have been whimsical falls headfirst into CG tanks and childish superhero nonsense. Fans of mature anime should consider other alternatives or perhaps watch the first half in delight and then hit the stop button, before an 8/10 film drops to 4/10 in a matter of minutes. A clear example of a story of two halves.