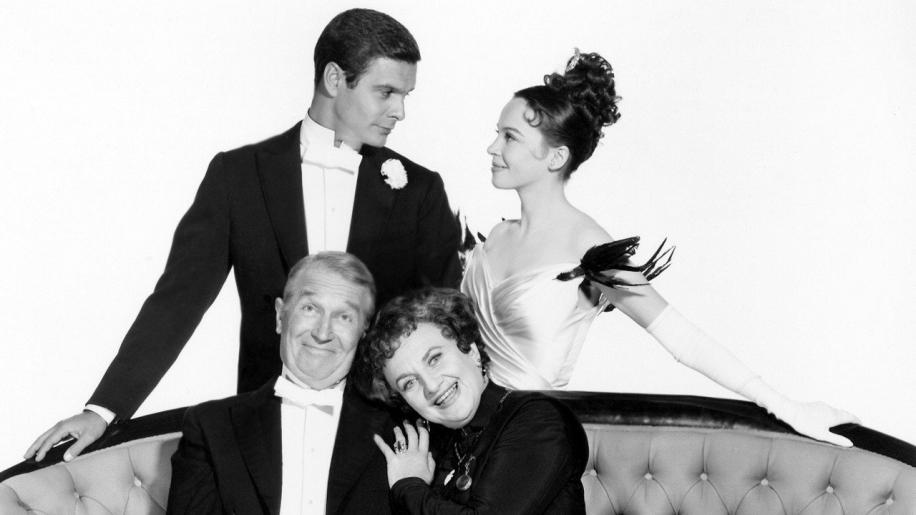 Roll up, roll up, roll up Ladies and Gentlemen. Here's your chance to see the last great MGM movie musical looking the best that it ever has - on Blu-ray.

'Gigi', the effervescent winner of 9 Oscars from 1958 bursts on to our home cinema screens. The film marked the end of an era, with the change in tastes of movie-going audiences. The phrase “they don't make 'em like that any more” springs to mind, not in any sarcastic way but with a genuine sadness as the stream of larger than life, colourful extravaganzas from Metro Goldwyn Mayer with tuneful songs that remain in the memory even today, was to dry up. A great shame, some might say, while others may breathe a sigh of relief - but it's hard not to look back upon them with great warmth and affection.

'Gigi' came to us from the great director/producer team of Vincente Minelli and Arthur Freed - who had previously given us 'An American in Paris' and 'Meet Me in St Louis'. Unlike those two classics, 'Gigi' was shot in Cinemascope and the extra width of the movie frame helped pull the audience in to the turn of the century Parisienne locations, from the Bois de Boulogne to the Place de la Concorde.
The Metrocolor photography replaced the three strip Technicolor of earlier productions, but in terms of sheer vibrant colour the movie is no poorer for the change.

For those who have been exploring the upper reaches of the Zambezi since 1958 and may have never seen it before, here's the storyline - such as it is.
Gigi, played with great charm by the young Leslie Caron, grows up in the company of her 'Grandmere', visiting her Great Aunt Alicia twice a week to be taught the necessary skills of a courtesan that she will require if she is to attract a rich husband who will keep her in a style to which she would like to become accustomed. A regular visitor to her Grandmere's house is bored but fabulously rich Gaston Lachaille (Louis Jourdan), who is at least 10 years older than Gigi. During the course of the movie, we see the young girl blossom into womanhood - and it's not wasted on Gaston either, who eventually realises that he has feelings for the cheeky young 'gamine' with whom he used to play cards, and lose.
The story is introduced to camera by Gaston's uncle, Honore Lachaille, played by Maurice Chevalier with the wisdom of life experience and a real twinkle in his eye as he surveys the events that take place around him.

Rising above all this though, it's not so much the story, but the great songs from Lerner & Loewe that surely present the greatest memories of this loveable picture.
One of the all time classics just has to be 'I remember it well' sung by the ageing Chevalier and Hermione Gingold as their characters recall their younger courting days with some memory loss - all bathed in the fading orange light of a Trouville sunset (more likely a Hollywood soundstage in reality).

Another sparkling number that immediately comes to mind is 'The Night they invented Champagne' which conveys such a 'joie de vivre' that you find it hard to get it out of your head.
'Thank Heaven for Little Girls' is yet another tune performed by Chevalier that takes you back in a time machine to a more innocent age. Leslie Caron's singing voice was dubbed for her solo 'Say a Prayer for Me Tonight' and Louis Jourdan talks his way through his numbers in a style reminiscent of Rex Harrison - although both performers manage to escape with their credibility intact thanks to their charisma - the very thing that makes the difference between an actor and a star. All of the songs sit quite naturally within the story too, never once giving the audience the feeling that they'd been shoe-horned into place.

The art direction and costume design on 'Gigi' are well worth a mention, for they also won Oscars, as every sequence benefits from an effective use of colour - most notably Gigi's grandmother's house interior which is a fully saturated red, to other more pastel shaded sets where Gigi's tartan (Americans would have called it plaid) dress provides the focal point.
It's real 'eye candy' - to use a phrase that hadn't even been coined when the movie was made.

Vincente Minelli manages to keep the mood of the film light and frothy. In lesser hands, the story of an older man with an interest in young girls could have appeared seedy - but the cynical mind is kept well at bay by the sheer joy of the movie. Overall, it's a spectacle for eyes and ears and a fitting high note for the era of the movie musical to end on.