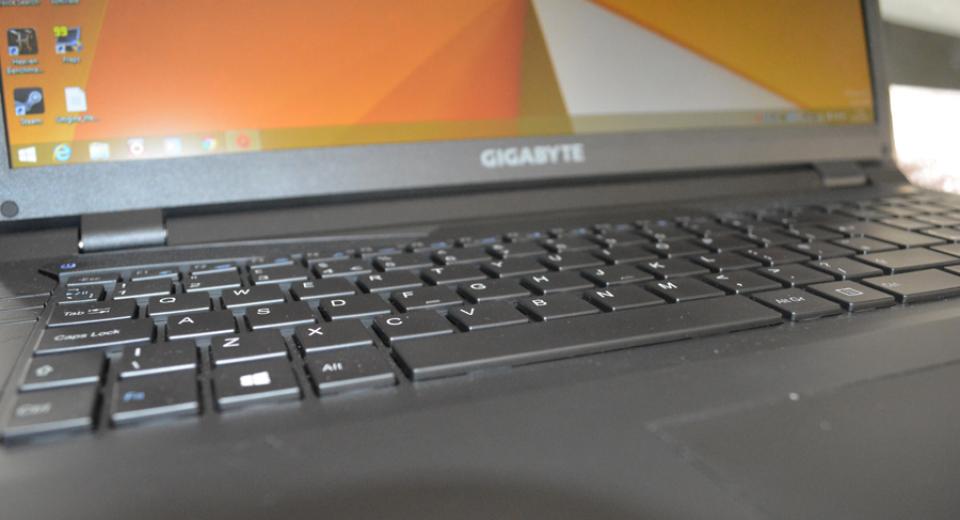 What is a laptop?

Most people generally think that laptops are either for sales people, who are on the road visiting customers, or for families who want a low cost, space saving computer to browse the Internet, read emails and maybe play the odd Facebook game. Well over the past few years this trend has changed.

Both those consumer types are moving away from a typical laptop in favour of tablets, which are taking over that role. So where does that leave the laptop? Well Gigabyte may have answered that question with their P27K laptop, which is being marketing as a “Gaming Laptop”. Let's take a look and see whether it can lay claim to that title.

The P27K is offered in two flavours; all black, or black with an orange lid. The model we're testing is the all black edition. The first thing you notice with the design is the large nature of the unit, this is down to boasting a 17.3”, 1080p screen. The rear of the screen has a somewhat robust/robotic design with its angular shaping, which gives it the feel of being gamer orientated. Upon opening the lid you instantly see a nice looking full size keyboard with a full number pad. Again the angular theme is portrayed here, with the top of the keyboard and the screen having the same style which adds to the whole design.

The actual build quality is spot on too, the plastic used is of very high quality with a great matte finish and the whole unit screams out as being expensive. The screen hinge has a very robust feeling and we certainly think that even with a number of years usage this will stand the test of time. After a hour or so of usage we did find one thing that wasn’t designed too well, the front of the laptop has a very sharp flap where your wrists rest when typing, this can become quite uncomfortable after prolonged use. Gigabyte could have rounded it off a little too ease the pressure put on your wrists. The actual build quality is spot on too and the whole unit screams out as being expensive.

This is the part that really did appeal to us when asked to review the unit. An i7 CPU with a clock speed of 2.4 GHz that can boost up to 3.4 GHz and a 128GB mSATA SSD and a 1TB Storage drive. The biggest hook for us was the GTX765M dedicated GPU with 2 GB of GDDR5 memory to boot. The rest of the spec is typical of most modern laptops; WiFi with 802.11b/g/n, Bluetooth, a 2 Megapixel camera and a DVD-RW or BluRay Combo drive depending on the spec you choose. The OS is the latest Windows 8 and is pre-installed for you. Finally the connectivity options built in are very good, with two USB3.0 ports, an eSATA/USB3.0 shared port, a single USB2.0 port, HDMI and D-Sub outputs, a RJ45 Network port, two audio ports for a mic-in and earphone–out, a 9 in 1 card reader and S/P DIF Out.

The major bone of contention for me with many laptops is their poor resolution screens as, during my working day, the laptop I use only has a 1366 x 768 resolution screen. This is not ideal for me and it is rather frustrating especially when working with software such as Excel which really benefits from a higher resolution. How we coped with the old VGA resolution of 640 x 480 many years ago I do not know. Anyway back onto the Gigabyte screen, this offers a massive 1920 x 1080 resolution. The clarity of the Gigabyte screen is wonderful thanks to it being full IPS, as opposed to many inferior laptops that only offer a TN panel, and the wonderful anti-glare matte finish compliments the same matte finish as the rest of the device.

For me this is one of the biggest annoyances when purchasing a pre-build laptop or desktop system from a large manufacturer. Personally my own desktop PC is a self-built machine on which, of course, I install a clean OS. But manufacturers love to create their own software and force it down the throats of unsuspecting customers. Gigabyte is no exception to this with something called Smart Switch this is a totally useless piece of software which is pinned to your taskbar and offers nothing that cannot be accessed easily from Windows anyway. This is just bloatware. Luckily Gigabyte made is easy to remove this software.

Gigabyte also decided it would be a great idea to have CyberLink Power DVD 10 pre-installed on the laptop. Upon opening this it gave me the option to upgrade to a full-edition with various “benefits”. VLC Player is all I need for DVD or any other video format playback, so again this software was promptly removed. I assume Gigabyte get some kind of kickback from the software house that produces PowerDVD. Other than that the rest of the software was just the standard Windows software with all the correct hardware driver installation setup.

The best way to test the machine is by doing what we enjoy most... playing games!

As already stated this laptop is equipped with a high end laptop GPU, the GTX 765M with 2GB of GDDR5 RAM, which boasts a clock speed of 900 MHz. The best way to test the machine is by doing what we enjoy most... playing games!

We jumped straight into the game and played for about 30 minutes. Fraps was installed and the game gave an average of about 45-50 frames per a second (FPS) when roaming in large open zones. In heavy battles with a number of mobs with grenade explosions causing debris to be rendered on screen heavily the frame rate did drop a little but it still maintained 30+ FPS at all times. We did manage to get the odd slow down below 30 FPS but this was rare and only lasted for a second and then it rose back above 30 FPS - this was during the time we were in a vehicle and enabled turbo boost causing a lot of fast movement. Overall Borderlands 2 was perfectly playable at max settings. We tested it at medium settings on all the options and got a solid 60FPS for everything with the exception of turbo vehicle driving but that remained a steady 40-45FPS minimum.

Battlefield 3, is one of the most hardware intense games to be released (until Battlefield 4) and at 1080p running the game on high settings was not great, the game ran at about 25 FPS, which is not nearly high enough for a “gaming laptop”. Fast online first-person shooter games require a decent number of frames a second (40+) otherwise you get your ass handed to you in game, no matter how good you are. Changing the settings to medium and reducing the AA down to low did massively help the frame counter but my personal feeling is that if I’m spending over £1000 on a gaming machine, whether it be a laptop or desktop machine should be able to cope with the higher graphics settings.

The speakers in the P27K are decent enough for a laptop and are far better than the majority of the competition. Generally laptops which are not intended as a gaming machine have very poor speakers built in. However, we have previously experienced gaming laptops from other manufacturers and the speakers on the P27K are much better than those. The audio is loud and clear, but does lack a certain clarity and punch. The only defines we can come up with for Gigabyte is that many gamers do tend to use headsets, so they decided to go mid-range with the audio setup here.

The laptop keyboard is great, it has low profile buttons and the overall feel of the design and size is ideal for gaming. We feel that the 17” screen works in tandem to ensure that the keyboard is of a decent size. The only let down as already stated is that the front edge of the laptop makes prolonged keyboard usage quite uncomfortable. If you are looking for an accomplished gaming laptop for home use then this machine ticks all the boxes.

When browsing the web, writing documents etc. (we're using the Laptop to write this very review) the hardware is brilliant, it’s fast, responsive and feels as quick as any high end desktop machine. This boils down to two main reasons, firstly the powerful hyper-threaded i7 processor combined with the 1600mHz RAM and secondly the mSATA SSD. Combining these three components make for an extremely enjoyable computing experience.

The life of the battery when gaming is dire, it lasted less than an hour when playing any game we tested, so you really need to have a main power source to game on it at all. When not gaming, in Windows browsing the web or with Office open, then the battery lasts quite a bit longer, around 4 hours with the screen brightness on a high setting, which isn’t bad at all. You should be able to get 6-7 hours out of it with a lower screen brightness. I do work on the road myself, and I have a small Samsung 15” laptop which isn’t intended for gaming, and I can get a full 8 hour's worth of use from that without a recharge, the P27K would certainly struggle to do that.

If you are looking for a very accomplished gaming laptop for use at home then this machine ticks all the boxes in our opinion. If you are looking for a truly portable laptop with the battery being the main source of power most of the time we would suggest maybe finding a product which is less of a power drain. The price online is around the £1000-£1100 price depending where you shop, so it is certainly not the cheapest of gaming laptops, but it is one of the best gaming laptops on the market.