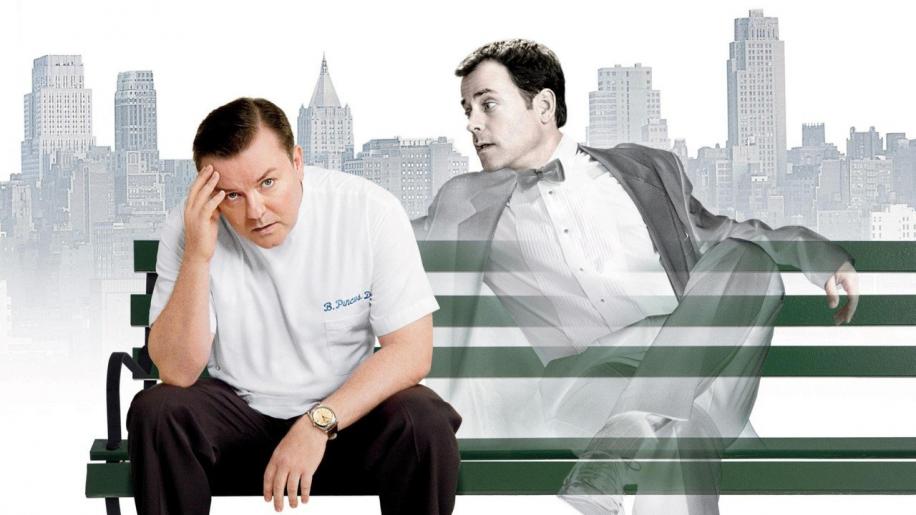 The career path for a comedian is a rather intriguing one to say the least. I say intriguing because what makes one person laugh will not necessarily amuse another.

Comedians generally start off as stand-ups, if they're extremely lucky, get a break to make a TV appearance or something and from thereon in their star seemingly begins to shine. Okay, so humour can indeed be infectious. However, you've got to wonder how someone can go from relative obscurity to extreme popularity in such a very short space of time.

In any case comedy is such an incredibly hard act to master. There's only a select few who'll ever carve out a notable career and I applaud all of those that do go on to succeed. I guess if you get the breaks then you should 'take your chances' and there's really no begrudging anyone who does just that. Tread carefully, play your cards right and see where it goes from there. Right?

Ricky Gervais is undoubtedly a very funny man. Personally, although not overly enamoured by his style, he does seem to have engaged with the Great British public's sense of humour in no time at all. All credit to him.

Hollywood however, is a very different matter. I think the last person from these shores to take his unique brand of humour over to Hollywood and succeed was probably Rowan Atkinson with his Mr Bean exploits? Perhaps Gervais felt that he had a short 'sell by date' and viewed this opportunity as a case of being now or never?

Ghost Town proves to be a fantastic lead role for him. It may have been a calculated and lucrative move to go across the pond but it's one that's paid off handsomely. His agent should be commended. This script proves to be an extremely good fit for both actor and film.

As a story it may strike a familiar chord with some of you though. When I first saw it, prior to Xmas for example, I immediately drew parallel to 'A Christmas Carol' or Frank Capra's 'It's a Wonderful Life'. Yes, there is more than a passing resemblance in the storyline but that's not to say that this is or was a Christmas film. No, not at all, as it is actually marketed as a rom-com (rightfully so) and seasonality is simply not an issue here.

There are a host of other movies that may also spring to mind such as Ghost, A Matter of Life and Death and Heaven Can Wait. In short there are elements in this which are borrowed but there is nothing to say that Ghost Town is completely unoriginal in itself.

Gervais plays centre stage here as Dr Bertram Pincus, a dentist living in New York. Working in a dental partnership he's seen as a complete misanthrope; when it came to social and conversational skills this guy was most definitely at the back of the queue. Continually shying away from other people, he's simply not one to outwardly engage. Unsurprisingly, this leaves him appearing as a rather odd and cold hearted fellow, along with an incredibly miserable image. Does he care? No, he really couldn't care less what people think about him.

In reality he's not that odd, perhaps just a little too insular for his own good? If he made the effort he would be fine but he's gainfully lost the ability to interact on a social basis. The world around him is imperfect and he wishes to be perfect within it; sad, sad man. You see he is one of those that would much rather whinge and mutter to himself, than to actually make a big fuss over anything. Little wonder with such a condescending attitude to life he's also developed some seriously retentive routines.

Not in the best of health he has to go into hospital for a routine colonoscopy. It's meant to be a straightforward operation but turns out not so; he is left with some rather strange side effects (serves him right some would say). Although not aware of it, he was clinically dead for 7 minutes during the operation.

Now, just as a good joke relies upon the delivery of a good punch line, then a particular type of comedy also relies upon the comedian to enact it just so. Dr Pincus now has the ability to see the dead or ghosts to be exact. Gervais is absolutely perfect here in what proves to be a stroke of genius. You've got an uptight, easily annoyed character that becomes hounded by hundreds of ghosts and it's only Gervais' unique style of delivery that carries it off.

If there's anything to put his Brit humour to good use then this film is it. Gervais is given carte blanche to demonstrate his skills to Hollywood and the world at large. His facial expressions, his persona, the demeanour and underlying levels of wit are what actually elevate this movie to a far higher plain. Bertram Pincus is simply a difficult character who has to learn to operate in a manner far removed from his comfort zone.

So, what of these spooks? Well, all these poor souls had basically been cut off in their prime. Their sudden and untimely deaths meant that they were unable to resolve unfinished business and they'd been left roaming the earth forever since. The point is, up until now no one from the living world could see them. Dr Pincus represents the perfect conduit for them to be able to resolve their outstanding matters with the ones that they left behind. He's clearly their only hope for 'closure' but the fact is what chance do they have with a stubborn and unhelpful fool like him?

Greg Kinnear plays Frank Herlihy, a smooth talking tuxedo clad business man. Frank is both the spook and 'bridge' character for Gervais to build off of. Having died a year earlier he had left his wife Gwen (Tea Leoni) heartbroken. Anyhow, he finds it difficult to continually look on as a ghost and accept the fact that she is now with Richard (Bill Campbell), a human rights lawyer. Basically he despises the guy and just can't stand the fact that she may well end up marrying him someday.

The deal here is straight forward. You've got Bertram trying to wave off hundreds of ghosts hovering around him like flies, with no avail. Up steps Frank who offers to get all these ghouls off his back as long as he does him this one big favour. He needs him to go wreck this relationship for him.

Fans of the 60's and more recently of Vic Reeves and Bob Mortimer fame will immediately cry 'Randall and Hopkirk (deceased)'. They would not be wrong. The inclusion of Frank makes the pair the most unlikely of partners. What is visible to one is not so to onlookers and much of the humour is in a similar vain to what you've already seen in that series. It's no bad thing though as Gervais' style still dominates as well as adding a twist to the dimension.

The only way Bertram is ever going to be able to help Frank out is if he can win Gwen over. It's not an easy task as right from the offset she sees him as a rather obnoxious and unlovable type of guy. For all those of a softer disposition the story will keep you suitably entertained from hereon. It's not out and out funny, it's just incredibly heart-warmingly funny.

So, essentially, the story revolves around a person coerced into changing his life for the better through the most unlikely of supernatural ways. Not only is it a humorous transition but also a very heart warming and touching tale.

Ghost Town leans far more to a comedy film than a romantic one, though enough chick-flick moments are thrown in to broaden the appeal. Don't be put off by that, because it remains a universally appealing comedy in its own right and one that is extremely difficult to dislike; surprisingly good indeed.