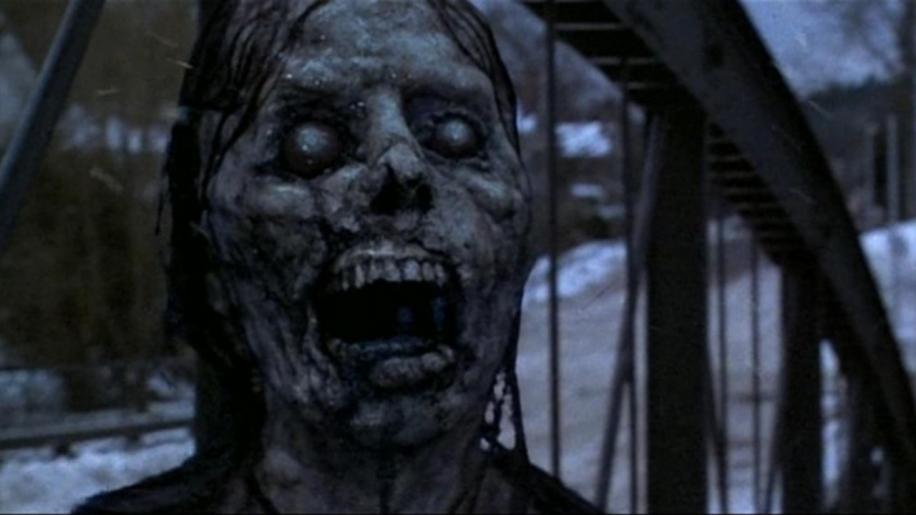 Made in 1981, Ghost Story is based on a pretty good novel by Peter Straub. The movie tells the story of the Chowder Society and the terrible secret that has kept them both together and haunted for over fifty years. Their secret starts unravelling when Don Wanderly (Craig Wasson) dies in unusual circumstances. Don Wanderly's father (Douglas Fairbanks Jr.) calls his remaining twin son, David, back to their home town for the funeral. However, David knows more than he is letting on and his father, along with the Chowder Society, know even more. What is the story of these old men and why must they remain tight lipped?

Sounds intriguing, doesn't it? It would be, too, if the soul of Peter Straub's novel was intact. As it is, the movie has been paired down to the point where some parts of the movie make little sense. The whole Gregory Bate (Miguel Fernandes) thread is curiously jarring, seemingly having very little to do with the main plot. The acting is a little forced, too, with only John Houseman and Alice Krige getting into the genre. Speaking of Alice Krige, she really does act everyone off the screen. She has an ethereal, yet powerful, quality to her voice - the way she annunciates certain words is very unique and perfectly cast.

“But is it scary?” you are probably not asking. Probably not as you may have already realised it isn't. There are a couple of moments that make you jump, a certain bathtub scene, for example, but otherwise no, this isn't a scary movie.

Strangely I liked Ghost Story, despite it's numerous shortcomings. There is a certain character to the movie, one that reeks of old school movies like Asylum, The House that Dripped Blood or even Tales of the Unexpected. There isn't any logic to this, and from a critical point of view I should be giving this movie 2/10. Anyone with a soft spot for older horror, however, will still like this movie, faults and all.