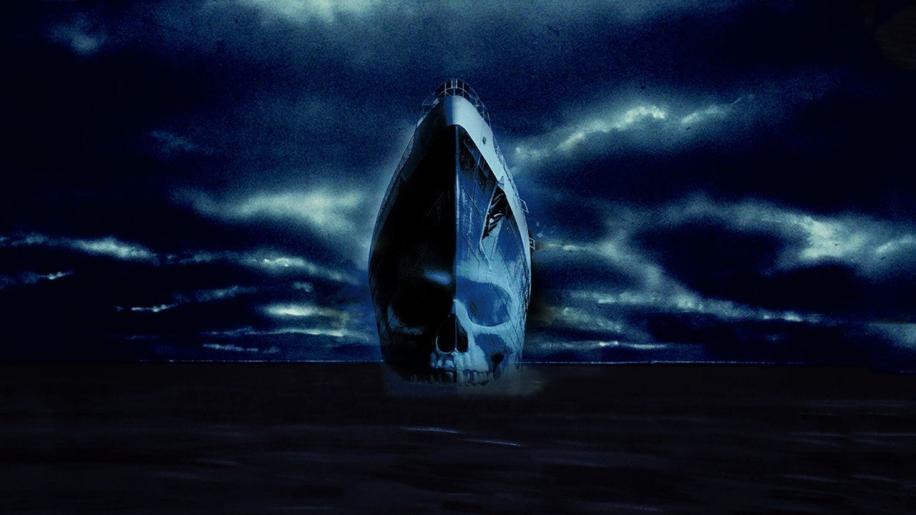 I feel I should start this review with something profound, something revelatory, something that simply blows the reader away with its originality. That way, this review would perfectly mirror the start of Ghost Ship.

I am not going to spoil the beginning of the film, suffice to say that it is one of the best opening sequences ever committed to celluloid. Yes, it is THAT good. It opens in a rather strange way, making me wonder if I was watching the right film. An old fashioned Warner Brothers logo appears, followed by a beautifully shot, romantic scene of people dancing to a live band on the deck of a ship on a moonlit night. The whole ambience is like an episode of Love Boat but with a budget and some class. Things are not as they seem, though, and anyone watching is likely to get rather a shock with the brutal and disturbing change of pace.

The ship, as mentioned in the second paragraph, is now a rotting hulk and floating in the Bering Strait. The Arctic Warrior, a salvage ship captained by Sean Murphy (Gabriel Byrne) and the 'daughter he never had', first mate Maureen Epps (Julianne Margulies), recruit an additional four members of thier crew and set out to plunder her. Once found and boarded they unfortunately find that all is not as it seems. The boat is haunted by ghosts that are not satisfied with just scaring the salvagers but want to kill them as well. Thus one by one our friends meet their ends, until, inevitably, only one is left to deal with the force behind the mysterious events.

With a promising plot, a decent cast, and the vision to mount such a tremendous opening, this really should have been a modern classic. Sadly, though, the appalling script means that it quickly dissolves into a confused mess which makes the cardinal mistake of never actually being half as clever as it thinks it is. This means that as it piles on ever stranger and more convoluted motives behind events (I am trying not to spoiler things here), the more confusing the whole movie becomes.

There is also, after that spectacular beginning, very little in the way of action and gore until the latter part of the movie. There is a lot of exposition and build up, which means that the film becomes rather unbalanced. Also, the filling of the first half with so many back stories, in an attempt to create empathy for the characters, fails due to the rather weak scripting and hackneyed dialogue, thus we are never fully invested the way the director intended.

The actors, apparently, signed up to the film based on a script that changed massively between them seeing it and the time they arrived on set. By then it was too late. This would certainly explain why the respected talent seem to have phoned in their performances. Byrne and Margulies in particular are talented actors who have a range about their work, and are capable of bringing nuance to their performances. However, neither of them manages that here. Instead, they seem to be sleep walking through their performances, never truly selling their characters as real creations. The supporting cast are your usual clichéd mix of cannon fodder, clearly destined to die from the moment they are recruited. They are like Starfleet redshirts - merely expendable ciphers. One of these actors, Karl Urban, was to go on and prove his worth in major films like Star Trek and Lord of The Rings but his promotion could certainly not have been based on his performance here which is as wooden as performances can be.

The frustrating thing about this is just how many good things that exist in this film. I cannot overstate how good the opening is, and the production design is also fantastic. They use models rather than CGI, and the effect is always entirely believable. One scene, which takes place in the water right against the hull of the ship, is extremely impressive and very believable. The interiors are also impeccable, always selling the story in a far better way than any of the actors ever manage. They are also lit superbly, as is the whole film, and this does a lot to help sell the creepy ambience that the director is striving for. The special effects are also extremely impressive, and when gore does appear it is always realistic and horrifying.

Ghost Ship is not a film that should be discounted out of hand. But the problem is that the bad stuff (acting, performances, script, plot) far outweigh the good stuff (beginning, set design, effects). The overall result is a cliched film that simply retreads areas where other films have been before, and not as successfully as them. In other words, this is probably the definitive rental disc. This is a film that will certainly go down well for one viewing on a Saturday night with your brain in neutral, and your stomach full of a beverage of your choice. The rewatchability level of the disc is quite low however, and it is not one that really deserves a permanent place in a film fan's collection.