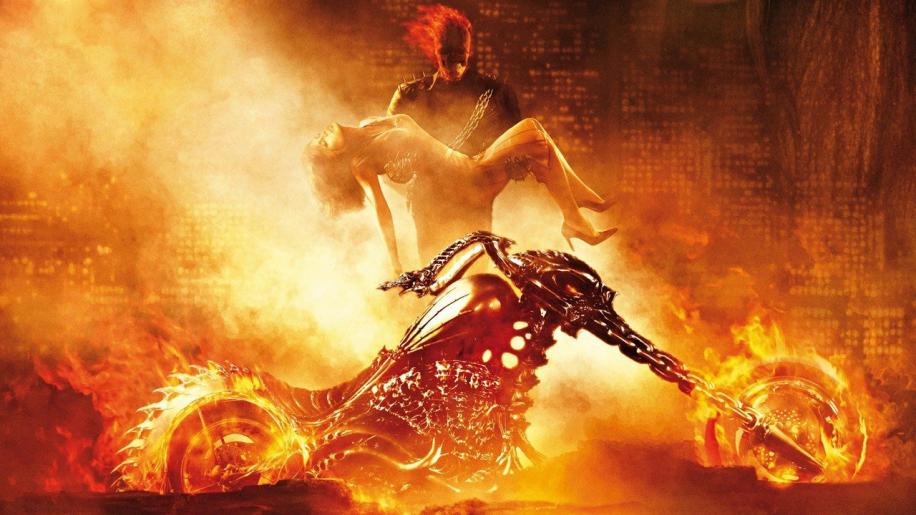 Another Blu-ray disc to be covered and another Marvel characterisation. This time it's the turn of by day Johnny Blaze (Nicholas Cage) by night the skeletal Ghost Rider.

Our erstwhile hero of this piece is a young lad, working in a touring carnival with his father Barton Blaze (Brett Cullen) performing motorcycle stunts. It's obvious that young Johnny yearns for something more, a life out of the circus, a life with his sweetheart Roxanne (Eva Mendes). Unfortunately whilst almost sneaking out the door, leaving his father to be a one man band, he stumbles upon information which indicates that his chain smoking father has terminal cancer. Does this stop him to reconsider his plans? No! What it does do though is open the gates for one Mephistopheles, the Devil himself (Peter Fonda), to persuade Johnny to sell his soul in return for a cure for his father.

A good deal on the face of it but that sneaky Devil never said anything about his father dying the very next day in a stunt which goes wrong. Still a bargain's a bargain and Johnny leaves his carnival and his sweetheart behind to try and make it on his own.

And so he does, becoming the most fearless motorcycle stuntman ever, even surpassing his fathers ambitions and the great Evel Knievel. The Devil's always there though making sure that Johnny survives the latest stunt. He has plans for the daredevil and once his son, Blackheart (Wes Bentley), goes off the rails he calls upon Johnny to track him down, to become the Devil's bounty hunter, to become Ghost Rider.

Not a comic franchise that I am familiar with so I sat down to watch with a completely open mind on the matter. I've seen a number of different odd stories in my time and can handle most concepts, and here the image of a blazing, leather-clad skeleton ultimately fighting the good fight seems fair enough. It's a big universe after all.

Director Mark Steven Johnson previously took the helm of Daredevil and writer for Elektra, so you could be hoping that after two failed attempts at bringing a comic book to the big screen that he may have perhaps learned from his mistakes. Alas he hasn't and these two hours drag on a little more than they should have. Casting Nic Cage in a role such as this was a little of an odd choice, I have a lot of time of this actor's ability (barring a few missteps along the way... Wicker Man anyone?) but he must have known that the role on offer here was so far beneath his talents. What was he thinking when he took it on board. He camps it up splendidly though, looking as though he is a man on borrowed time as he most definitely is. You would think though that a relatively unknown actor might have been better suited to the role.

Peter Fonda makes a good enough snake charming Devil and Sam Elliot comes in as he usually does as a rough weather beaten old cowboy. Apart from those two though there's not a lot you can say about the rest of them. Johnny's young love catches up with him but there's never any spark there, no relationship worthy of developing. The four evildoers Hell bent on taking over Mephistopheles' crown are neither particularly scary nor powerful. Perhaps they should stay with stealing candy from babies, although in this regard I'm sure Maggie Simpson would give them a run for their money.

So ultimately two-dimensional characters presented on page remain so on screen. Cage no matter how much he camps this up can't save it from it's own murky fate. The plot mumbles along without any real cohesion or direction and this on top of his disastrous Daredevil squarely points the finger at Johnson having to either study his work more thoroughly or go back to school.