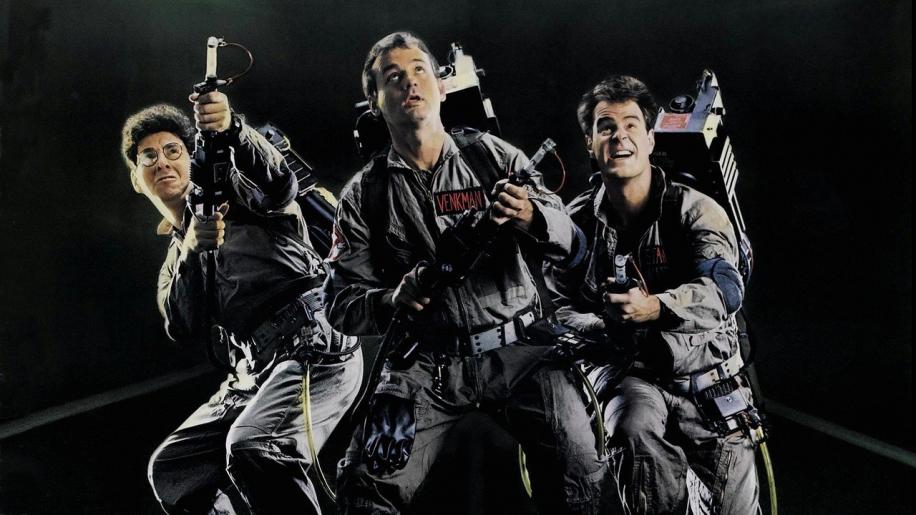 Let me start by saying Ghostbusters is an absolute classic. Resoundingly funny, it tells a fun, engaging tale of ghosts and ghouls. The first movie introduces us to the main crew - the geeky Egon Spengler, the neurotic Ray Stantz and the slightly more down-to-earth Peter Venkman. After losing their University funding they decide to set up shop as a paranormal assault force - the Ghostbusters - and within a few weeks they find the city desperate for their skills. Proving popular both in the media and with the public, they vanquish slimy phantoms all across town until one day they come across the mother of all demons.

The cast really bring the characters to life. Not least Bill Murray, the King of Deadpan, as Peter, whose desperate plays for the affection of Sigourney Weaver's Dana are consistently entertaining. His comeback in Lost in Translation reminded me of how good he was and upon revisiting and fully appreciating his earlier work - films like these - I realised that he pretty-much makes any movie he is in a cut above the rest. Dan Ackroyd was pretty well-known already, but his role as Ray in Ghostbusters only enhanced his standing as another funny player. Harold Ramis, who played Egon, is probably now more famous for his work behind the camera, but he is perfectly engaging as the geek whose hobbies include 'collecting spores and moulds'. Aside from the primary cast members there are plenty of faces you will recognise in smaller roles. The Crow's Ernie Hudson joins the team midway through, Little Shop of Horror's Rick Moranis is at his usual nerdy best as one of the hapless victims of the ghostly villain, Gozer and the aforementioned Sigourney Weaver, looking young and acting suitably sassy.

The first film is great fun - in fact I never realised just how funny it truly was until I watched it again for this review - with Murray at the lead and the script by Ackroyd and Ramis sharp as it gets. Sure the effects have dated quite poorly, the frequent montage sequences are distinctly eighties and the story is silly but it is all so much fun that you instantly forget all of the flaws and just enjoy the ride. Definitely a classic.

Ghostbusters 2 sees the four main members return for more ghoul-trapping mayhem in Manhattan. Unfortunately, this time round the story doesn't really hold up. Plenty of the side characters return - Sigourney Weaver's Dana is a permanent fixture and Rick Moranis is now their lawyer - and there are quite a few laughs, but the plot is resoundingly lame. The Ghostbusters are almost out of business, only appearing to sing their theme song at children's parties. Other than that Egon runs stupid tests at a school, Ray runs an occult bookstore and Peter hosts a comedic talk-show. The Mayor and the city have seemingly forgotten all the good work they did five years earlier, doing such a good job that they put themselves out of business and actually found themselves in court for the damage they did to the city. Lucky for them Dana, who married and had a kid with somebody other than Peter, is having yet more supernatural trouble. Boy this girl is cursed.

Also written by Ackroyd and Ramis, this episode just does not live up to your expectations. There are moments of hilarity but even Bill Murray cannot save this from being a little lame. The villain, Vigo, who lives in an evil painting and his wimpy oddly-accented sidekick (Peter MacNicol, that weird guy from Ally McBeal), are both a great deal to blame, spending the majority of their time flooding the city with emotional pink slime or trying to steal Dana's baby. The various set-pieces barely string the show together for its overlong best part of two-hour runtime and you find yourself largely watching it just to see more of the Ghostbusters in action, although that is not necessarily such a bad thing.