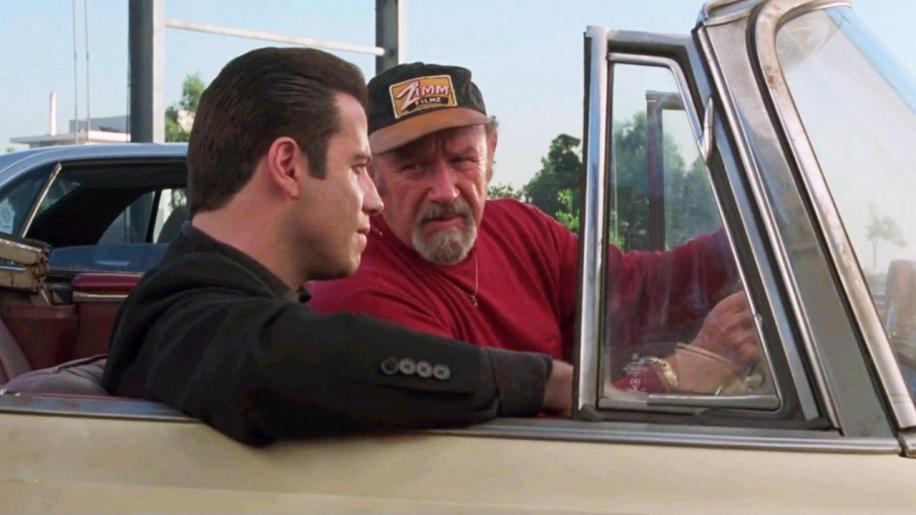 Chili Palmer (Travolta), a movie-buff shylock, is sent to collect an outstanding debt from Leo, a laundry shop owner, except Leo is apparently deceased due to an aircraft exploding that he was supposed to be on. Leo's wife has however, cashed a $300,000 insurance cheque and sent the money on to Leo, who has done rather well on the gambling front. Chili tracks Leo down to a hotel in Vegas, but he's gone at this point and is asked by the casino boss to collect money that they are owed from Harry Zimm (Hackman), a movie producer in LA. Chili finds Zimm and starts to propose a movie that they could make, which is basically his tale of trying to find Leo. Zimm however not only owes the casino boss, he also owes $250,000 to Bo Catlett (Lindo), who has invested in the movie “Freaks”. Zimm currently wishes to direct Mr. Lovejoy (his “Driving Miss. Daisy” as he puts it), so Chili has to deal with getting Bo off Zimm's back as well as wanting to make a film with Zimm. They also need to recruit Martin Weir (DeVito), the Shorty of the title, to star in either Mr. Lovejoy or the movie revolving around Chili tracking down Leo etc. However, things get complicated (although this is already complicated enough), when Zimm contacts Ray 'Bones' Barboni (Farina), Chili's boss, who wants to know where the debt from Leo is.

Yes that's hard to follow, but then this is not the simplest movie to explain when there are several different threads intertwining, however it's easier to follow on screen, believe me! I do like this movie as to me, it's very funny, it doesn't rely on set pieces as it is rather dialogue heavy and has a certain coolness about it, much the same way as Oceans Eleven is considered cool. Travolta plays his role well enough but it's definitely an ensemble effort, with Hackman showing great comedic skills, although playing it straight and against type. DeVito is good as a primadonna actor and Lindo is fantastic as a likeable villain and Farina has some wonderful lines such as “E.G. I.E **** you”, which pretty much gives you an idea of his vocabulary, but he is more amusing than anything else, although he is truly the real villain. Rene Russo, looking fantastic, is also good to watch (where is she now?) and completes a very good, highly watchable cast. Not only do we have the principals, we have pre-Sopranos Gandolfini as Bear plus cameos from Bette Midler and Harvey Keitel so no complaints here on the cast. If you like action movies, this isn't really for you as it is a very character, dialogue driven movie with plenty of plot threads to keep you interested. For example, although Bo is a villain, he aspires to something else - he wants to become a producer, which is probably why he invested money into Zimm's movie. Chili himself no longer wishes to a shyster either, so there is a continued idea of people aspiring to be something else, something better. The one thing I noticed about the cinematography in this movie was a lot of crane shots, but this is elaborated more in the extras, but it was rather noticeable to me, more so than other movies. This is good fun to watch on a Saturday night, it's clever and very witty, if you've got that sense of humour with an excellent cast and some snappy dialogue.