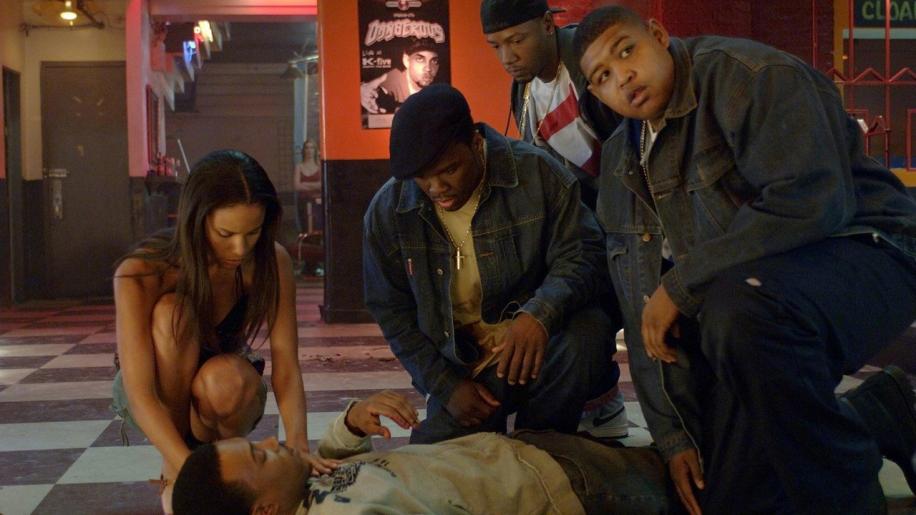 Have you ever wondered what would happen if a good director, known for producing reliably decent dramas, came across a solid (if unexceptional story), put together a capable cast with the intention of creating a very watchable and entertaining movie but had one bad element - a poor choice of lead. We've seen the result before - most recently in Kingdom of Heaven, where the horribly miscast and distinctly wooden Orlando Bloom was supposed to be a heroic warrior and leader but came across more like a constipated, depressed plank of wood. Now Jim Sheridan, the man who directed the great Daniel Day-Lewis in a trio of superior dramas: The Boxer, In the Name of the Father and My Left Foot, has potentially made that very same mistake, casting the gangster-rapper Curtis '50 Cent' Jackson as the lead in 50 Cent's very own life story, Get Rich or Die Tryin'.

Marcus was brought up in a shattered family home, his mother a prostitute, his father potentially any one of his mother's tricks and the biggest influences in his life being crime and money. It is not long before he is taken in by his mum's pimp, wielding his own gun and committing petty crimes in a small gang. This leads on to much bigger operations for territory and huge conflicts with rival gangs, but his success on the street is brought to a swift end by a short stint in prison where he learns, the hard way, that crime really doesn't pay. When he comes out, being a musician becomes his new ambition and he tries to become a rapper. But will his old gang contacts ever allow him to drop out of his previous life of crime?

Get Rich or Die Tryin' is a decent enough crime drama, with solid performances, a good script and keen direction. Sure, it has all been done before (and better, with movies like Boyz in the Hood still being unsurpassed in this kind of genre) but that does not mean that this is not a perfectly enjoyable addition. Jim Sheridan has shot it in a stylish but not overly-stylised way, garnered solid supporting performances from the likes of Terrence Howard (Crash) as Bama, a friend Marcus makes in prison and Adewale Akinnuoye-Agbaje (The Bourne Identity, Oz) as his mother's pimp, Majestic and the end result is eminently watchable if unexceptional.

What about 50 Cent? Well, although I understand that he's purportedly been through all of this (it is supposedly 75% true) and I also understand that he is a popular rapper, somewhat noteworthy for his musical talents, but none of that gives him the skill to command a lead role in a movie like this. He just can't act. Maybe he really did shoot people, run around challenging rival gangs, knocking off liquor stores and getting attacked in prison. Maybe he did indeed go through all of this, but that still does not give him the right qualifications. He is one of the worst actors on the planet, rivalling Bloom for lack of expression and woodenness and I really hope that nobody ever gives him a film role again so that he can stick to his music - what he does best. As for the movie, it suffers greatly from 50 Cent's integral 'performance' and the end result is somewhat irredeemable.