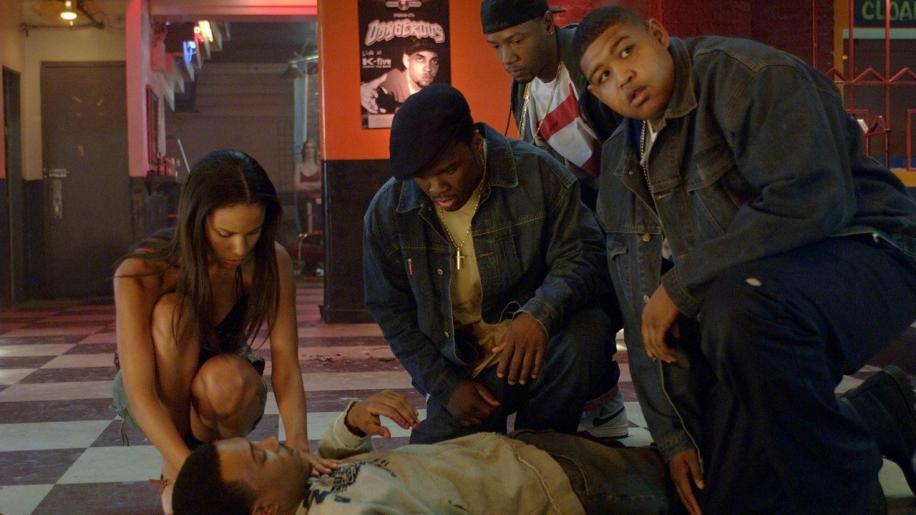 Get Rich or Die Tryin' is presented in a reasonably good 2.35:1 aspect ratio anamorphically enhanced widescreen transfer. The detail is generally above par, with clarity for the most part and only a little softness, depending on the scene. There is some grain apparent but no signs of digital artefacting, no edge enhancement. The colour scheme is quite bright and vivid, with some of the club sequences rich in vibrant reds and the prison sequences looking suitably claustrophobic. Blacks are solid, allowing for decent shadowing and the transfer itself exhibits no signs of any print damage.

To accompany the movie we get a solid Dolby Digital 5.1 track that sounds pretty good. Dialogue is presented mainly from the frontal array, with even 50 Cent's mumbling monotonous narration coming through clearly. The effects range from frequent gunshots to less obvious but equally well-observed ambient noises like seagulls and . Of course, the most well-presented aspect of the track - as it should be - is the score, largely comprised of 50 Cent's own music, which really comes through on this particular soundtrack and makes you wonder why they didn't splash out for a powerful DTS alternative, just for the sake of the presentation of his songs. (Unfortunately it should be noted that the final version tracks they play make him sound vastly different than during the lame rehearsals, where you wonder why he could have ever landed him a record deal in the first place)

A Portrait of an Artist: The Making of Get Rich or Die Tryin' is a thirty minute Behind the Scenes Featurette that looks into the production, with interviews from the main cast and crew and plenty of background footage. We see 50 Cent in concert, shamelessly promoting his new movie, as well as find out the story behind how Jim Sheridan got involved in such a project (namely through mutual friend Bono). There's a lot of hand-held video diary stuff and this comprehensive Featurette has enough trivia to rival a Commentary, but it still does not save the movie from being a dud, nor explain why Sheridan agreed to let 50 Cent take on a role clearly above his abilities.

We also get a Theatrical Trailer and Previews (on disc start-up) for Aeon Flux, Queen Latifah's Last Holiday, Mark Wahlberg's Four Brothers and the pimp-rap drama Hustle and Flow

Despite a fine (if unoriginal) script and story, some solid supporting performances, keen direction and a reasonable amount of action and drama, Get Rich or Die Tryin' ends up being more like Get Rid (of this movie) or Die Yawning, purely because of gangster-rapper 50 Cent's dementedly wooden performance. He acts like a boxer who has taken one too many punches and has that constant gormless, kid-from-Gentle-Ben look on his face, unable to emote, express or perform in any way other than on stage. This self-centred ego-trip of a movie (just like the game he insisted on making) is rendered utterly pointless and despite reasonable video and audio and a single extra, this movie is not really even going to please fans of this artist's music.