Get Him to the Greek Movie Review 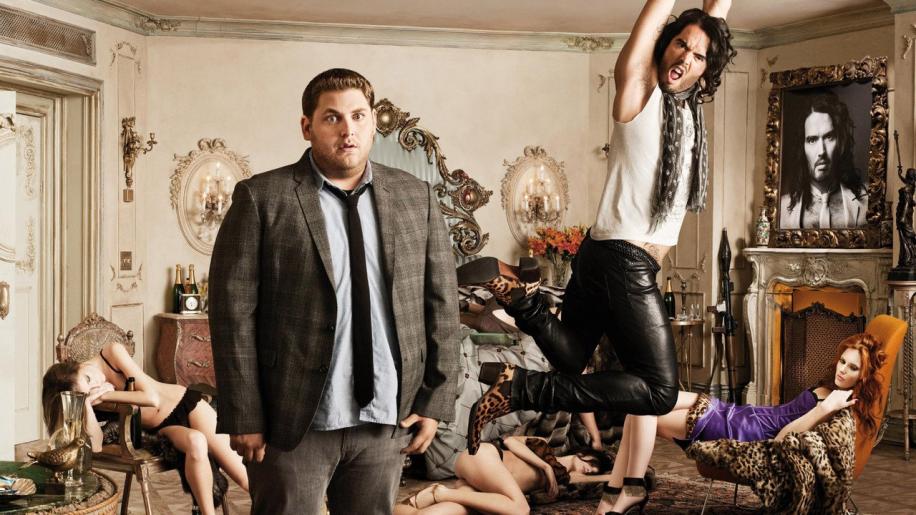 Russell Brand is as divisive a figure in modern comedy as you’re likely to find – some love him and others loathe him. However, whether you think he’s a talentless vulgarist chancer or an original flamboyant comedic linguist, there can little doubt that his star is on the rise. Thanks to a TV career littered with hits and misses, his ratings grabbing radio show and subsequent smash-hit podcast, the progression to arguably the largest of all medium – cinema – was only likely to be a matter of time. Having received some praise for his role of Flash in St Trinians (2007) he went on to take a larger role the following year in the Judd Apatow produced Forgetting Sarah Marshall. It was noted by many that his role in that movie, that of a pompous, ridiculous and opinionated rock star, was not too much of a stretch for Brand to grapple with, but whether close to the truth or not, it hit a chord with audiences of a certain age and proved successful enough to warrant a spin-off. As such, director Nicholas Stoller has gone back to the standout figure of his feature debut to give those eager to see more exploits of the character (or should that be caricature), which brings us to Get Him to the Greek.

Many of the faces behind the film remain the same, with the key name of Apatow still attached, but what has changed is the writing staff. The script to Forgetting Sarah Marshall was penned by lead actor Jason Segel, but duties for the spin-off have been handled by Stoller himself. The story is fairly straightforward, young music bod Aaron Green (played by Superbad’s Jonah Hill) is ambling along in a pleasant, but unexciting, relationship with his girlfriend Daphne (played by Elisabeth Moss from TV’s Mad Men). His boss Sergio (Sean “P-Diddy” Combs) is keen to re-inject some vitality in his record label Pinnacle; various ideas are bandied about, with everyone looking for the next big thing to rake in the profits, but ultimately there is no originality coming forward and the various lackeys at the label have little but hype to hang onto. Green puts forward a notion of bringing his hero Aldous Snow back from the brink of his reckless drug-induced lifestyle, caused by the monumental failure of his last album and his relationship breakdown, to put on a comeback gig coinciding with the anniversary of a famous show once performed by the front-man and his band Infant Sorrow that proved especially lucrative for the music mogul. A little narrative is thrown in by Stoller for good measure but the decision was always going to be the same – Green is sent to retrieve Snow from London, ferry him to a TV show in New York and ultimately deliver him to the Greek Theatre in Los Angeles within the space of 72 hours.

It’s a decent set-up for the film, but it must be said it is hardly original. Those familiar with the 1982 Peter O’Toole film My Favourite Year will see the likeness – Benjy Stone, a young junior on a variety show being replaced by Green’s music label underling, his childhood hero he is sent to chaperone, the now drunkard Alan Swann (O’Toole) being replaced for a drug addled Snow and the venue being switched from a TV show to a rock concert. Admittedly there have been several movies down the years that have garnered much hilarity from the premise of one individual forced into the task of babysitting another wayward soul, but the similarities between these two in particular are fairly striking. While the set-up may be fairly unoriginal, the manner in which laughs are gained are far from the same as the underrated O’Toole comedy. As with numerous recent Apatow produced films, such as Step Brothers subtlety is often eschewed in favour of shock value and vulgarity. I say this not necessarily as a bad thing, but whether you’ll find this, and others similar, to your liking will depend largely upon your tolerance for coarseness in comedy. In many ways it fits in perfectly with Brand’s stand-up, for if you find that too in-your-face, with its sweary tales of sexual misadventures and the like, then you probably won’t make it through to the credits here.

So, with the large amount of audiences flocking to see this already familiar with the style employed, the key question remains – is it funny? Yes, to a point. Underpinning much of the movie are the interspersed music videos, starting off with Snow’s ill-fated African Child, a lamentably poor and ankle deep plea for peace in a war torn country which is deemed by the singer to be immensely important, yet like all good rock stars he himself remains largely ignorant of the cause he is championing. This conceit of shallow, pampered and moronic musicians falls straight out of This is Spinal Tap and though some may feel it is an easy target, who can honestly say they have not seen similarly incredulous material produced by artists of the day? If anything it is the appearance of Rose Byrne as Snow’s girlfriend and mother of his child that brings with it the more potent stabs at popular culture, with her insanely over-sexualised videos written with paper thin double entendres – if they were released they could probably pass as genuine.

The dumb, vain rock star can only last so far without A grade writing, but unfortunately Get Him to the Greek doesn’t have Guest, McKean, Shearer and Reiner behind it. Luckily, with the figure of Brand and all his childish exuberance, even when the material seems slightly weak the delivery is usually enough to keep it afloat, at least long enough for Hill to enter with his own comedic talents. Far from the foul-mouthed teen of Superbad, here he displays a layered and understated talent for drawing out the tension in situations, be it an argument with his girlfriend or suffering a drug induced heart attack. His ability to go from sedate to insane in a matter of seconds holds many of the set-pieces together and is at the very heart of the biggest laughs. Even Sean Combs shows a surprising aptitude for timing, he isn’t given the greatest lines but he seems perfectly at ease in his delivery and few will forget his appearance as a disembodied head during a hallucination. Speaking of which, the final part to the comedy is infinitely reminiscent of a somewhat darker, but no less hilarious, tale into the abyss of drug excess - Fear and Loathing in Las Vegas, namely the mad high-jinks that emanates from substance abuse. The most memorable sequences (arguably in both films) are often those that revolve around heightened senses and the juxtaposition of perception and reality. One particular sequence features Green, now sucked into the debauchery of Snow’s perverted world, on a drugged up jog through Central Park. These interludes of slow motion and altered reality may slightly skew the overall pacing, but they are certainly some of the best moments.

As the story progressed, Stoller actually moves further away from the light hearted Hollywood take on excess that may stray as far as weed and goes into altogether more risqué territory – cocaine and heroin are rarely the stuff of whimsical comedy but realistically it is the only way to create the necessary tension required for a breaking point between the pair of affable companions and to highlight the rift in ideals. This forms the central problem to the film as a whole, as the entire final act lags, with the hilarity curtailed by the inclusion of an awkward and vaguely malevolent threesome and some attempts at drawing some genuine emotion from the character of Snow. Brand is at his best when acting himself, the point was even mirthfully made during one of his podcasts at the time of the filming of Forgetting Sarah Marshall that he was tested in as much as having to remember to answer to a different name. The rest of the attributes necessary to depict a flamboyant, over confident loud mouthed English dandy were hardly requiring deep research on the actor’s part. With fans knowing so much of the comedian’s private life and escapades due to his cathartic revelations during his stand-up routines and his bestselling autobiography, those keen on his work who know of his life may feel like the film starts to take on an altogether quasi reality. All the key elements are there for a big screen outing of his very life – drug excess, booze, sex, doting mother, tantrums, absent father, messianic complex, drug smuggling, the list goes on. With the huge list of celebrity cameos, mention of music mags and TV shows, the intention was clearly to place this film firmly in reality, but due to the similarities with the leading man’s own life it can feel like the reality they have found themselves in is a filmic adaptation of My Booky Wook.

Thankfully, this in effect turns out to be the film’s saving grace. It is the fact that Brand has actually lived a great deal of at least similar experiences that keeps the lesser situations rolling until the absurdist set-pieces or more finely honed back-and-forth exchanges between himself and Hill appear. In some cases it heightens the hilarity as there is a very real chance the reformed drug addict knows exactly the perils the character of Aaron Green finds himself in when he is apprehensive of sneezing considering he has a rectum loaded with drugs. Fans will no doubt see this as a deserved full length cinematic outing for one of the most original comedians in recent times, whilst those opposed to the humour and overall demeanour of the modern day Edwardian dandy from Grays won’t find much to sway them into enjoying this, as even Hill and Combs revolve around his antics to a certain degree. His persona effuses everything, and whether you see that as a good or a bad thing is purely a matter of taste, but there are enough laughs for the neutrals to make this a fairly amusing ride that sits comfortably in amongst other recent comedies of the ilk. Even if it never reaches the heights of more deft muso-bashing material as This is Spinal Tap it has enough memorable moments to make it worth a watch. Brand aficionados rejoice, Mail readers wince, the rest should just give it a try and maybe have a few laughs along the way.