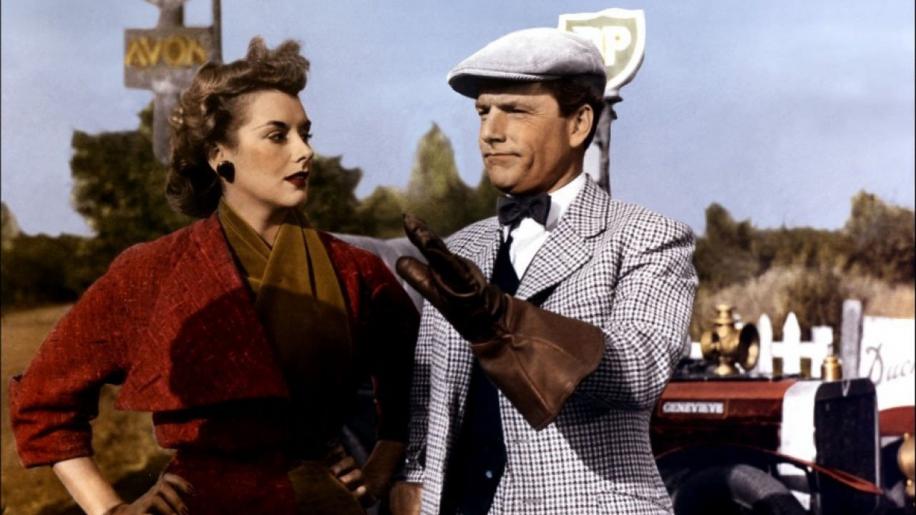 The classic movies are coming thick and fast at the moment on American Blu-ray and now we have the Region free release of the very British ‘Genevieve’. This tale of two couples taking part in the Veteran Car Club of Great Britain’s London to Brighton car run was a surprise hit in the North American market back in 1953 for the cast and Rank Distributors. Who’d have imagined that a film about a couple of old crocks would have done so well at the Box Office. The film had a very simple storyline and no big action scenes but what it did have was something that many modern movies lack – immense charm!

It also had a great cast of four principals – the irrepressible Kenneth More, the normally unflappable John Gregson, the lovely Dinah Sheridan and the absolutely beautiful Kay Kendall. It would be a travesty not to mention the two other big stars in the movie – Genevieve, a 1904 Darracq driven by John Gregson and the yellow 1904 Spyker driven by Kenny More. It’s not unknown for an actor to claim that he can ride a horse to secure a role, but nobody thought to ask John Gregson if he could drive before he turned up on location for ‘Genevieve’. This led to problems in shots where he was to be seen driving his vehicle, but ingenuity conquered all by putting a replica of the car on the back of a low loader. It’s sad to think that the only remaining star of the leading players is Dinah Sheridan, the others having passed away over the years. Saddest of all was the death of Kay Kendall in 1959 from Leukaemia at the very young age of 33.

The supporting cast is well worth a mention too. There’s the wonderfully eccentric, rather toothy, jolly hockey sticks Joyce Grenfell (Don’t do that, Timothy) as the owner of a run down Brighton Hotel where hot water is only available in the rooms in the afternoons between 2 and 6 pm. Leslie Mitchell, a famous TV presenter and cinema voice over artist of the period makes an appearance early on doing a live broadcast from Hyde Park at the start of the run. Geoffrey Keen, a famous face from the Bond movies, rolls up as a motorcycle Policeman who has the task of keeping the two drivers on the straight and narrow. Michael Medwin, who in later life produced Lindsay Anderson’s ‘If’, pops up as an expectant Father who side tracks Ambrose and Rosalind as he needs to get his wife to hospital. Then there are the faces that you just recognise but can’t name because they were great character actors and appeared in so many movies over the years.

The film opens as Barrister Alan McKim (John Gregson) is getting excited at the prospect of the annual car run to Brighton and plans to spend time tinkering with ‘Genevieve’, his pride and joy, a vintage Darracq automobile. His Wife Wendy (Dinah Sheridan) doesn’t quite share his enthusiasm as she remembers previous trips with less than fond memories, mostly due to the British weather and broken down cars. Their friend, Ambrose Claverhouse (Kenneth More) announces that he is bringing his latest girlfriend, Rosalind (Kay Kendall), along on the run. At the Hyde Park starting line, Rosalind arrives wearing the latest fashion couture with a huge St Bernard dog in tow. The two men, being fiercely competitive, bait each other with jibes and dirty tricks along the way so that when Alan & Wendy arrive late for the party at the Metropole Hotel, competition is in the air. Probably the most memorable scene from the movie is where Rosalind, fuelled by a few drinks is unimpressed by the band’s trumpet playing. “I’ll show them how to play the plumpet”, she announces and to her friends’ horror goes up on stage then bowls the guests over with a virtuoso trumpet performance before passing out. A wager is placed, so that the journey back to London becomes a race between the two couples – something which is banned by the car club. A whole series of escapades follows, with both teams resorting to underhand tactics and falling foul of the long arm of the law on more than one occasion. Who will win the bet? Like you don’t know!

The film is full of lush Technicolor photography of the British countryside courtesy of cinematographer Chris Challis. The impression is given that it was shot en route to Brighton but in reality most of it was shot in leafy lanes within about ten miles of Pinewood Studios in Buckinghamshire. Many of the locations can still be recognised today, if you squint a bit. The pub by the bridge at West Drayton (across the road from the, then, wooden hut called the People’s Snack Bar) where the two couples sit on the steps eating ice cream cones is still there. At least, it was a couple of years ago when I used to pass it regularly.

One of the most memorable features of ‘Genevieve’ just has to be Larry Adler’s simple but wonderfully inventive music score performed on the harmonica. The theme is such an infectious tune that it plays on a loop inside your head for days after you’ve seen the movie. Director Henry Cornelius manages to hold the audience’s interest for the 86 minutes duration, but it’s quite amusing when you consider that this ‘awfully British’ movie was scripted by American William Rose.

It’s a window on a much more civilised world, where people were polite to each other in the street and good manners were important. Above all, it’s enjoyable fun with no really nasty edge to it and the Technicolor photography makes it all look so good. For film buffs and motoring enthusiasts everywhere.