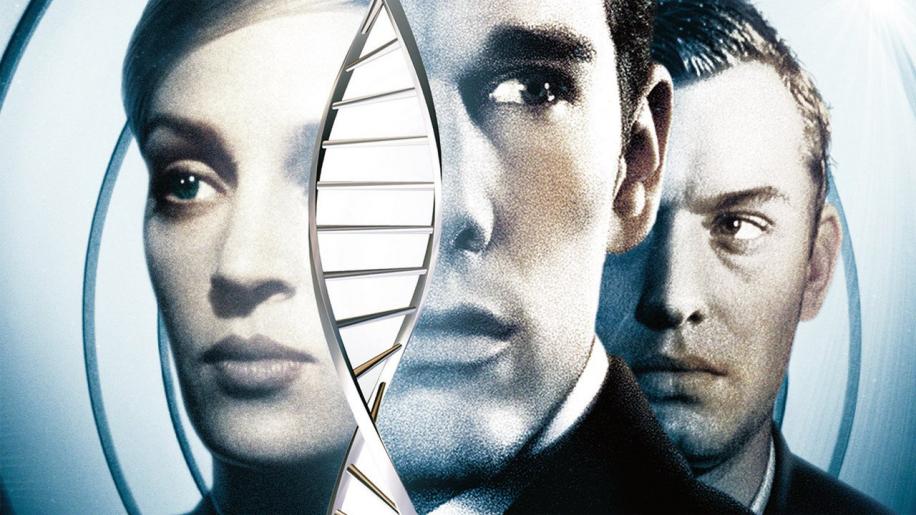 The director and writer of Gattaca Andrew Niccol has chosen his sparse projects wisely in my own opinion, writer of the excellent The Truman Show with it's own slant on reality TV, The Terminal with its sly look at the restless society we live in today, and his first work, writing and directing Gattaca.

Its origins are obviously from Aldus Huxley's Brave New World and that's no bad thing in itself, I just wish it had been acknowledged as such by the whole production team. On the most basic level it's a simple enough story detailing how one man, Vincent (Ethan Hawke) attempts to overcome his 'disability' and reach the upper echelons of society. Guanine, Thymine, Adenine and Cytosine; the basic building blocks of deoxyribonucleic acid, also the letters used in the title Gattaca.

Vincent is a natural child in a society where children are engineered. From the time they are only 4 cells their whole future can be mapped out for them, hair colour, eye colour, intelligence, toned bodies... the works. Vincent never had this 'luxury', never had this gene manipulation; as such he's a de-generate - he's also going to have attention deficit disorder, hyperactivity and due to a weak heart the high possibility he'll be dead before he's 35. His brother, Anton (Loren Dean), born some years later has none of these disadvantages; his parents took the time and money to invest in his
future.

Vincent and Anton compete as all siblings do, Anton being the stronger always coming out on top until one fateful night when swimming he gives in, the determination of Vincent pulling him ever ahead. Vincent's dream though is not to swim but to be an astronaut. For as long as he can remember he has always looked to the stars. After leaving home he eventually gains employment as cleaner at the space agency, Gattaca. He cleans because his' defective' genes will not gain him entry to the job he really wants. All is not lost though as he's offered the chance to impersonate Jerome Morrow (Jude Law), a perfect specimen who due to an accident is now confined to a wheelchair.

All seems to be going well until one day there's a murder at Gattaca and the police are brought in to find the culprit. Will Vincent be exposed as the disabled that he is or will he still achieve his goal of reaching the stars?

Gattaca falls into the thinking persons Sci-Fi, don't expect gleaming saucer shaped space craft, gleaming control panels with voice input or intelligent robots at your constant beck and call. Gattaca hides the technology well, you know it's there, you are aware that this is some time in the future but the set and costume design project a retro feel so whilst you know you're in the future you're also comfortable because you can still relate to the images presented up on screen. Moreover the technology is not really needed here, Gattaca discusses the development of a dystopian society. Life isn't all that bad, it's a clean environment, people on the surface appear healthy, and no overpowering government is watching you.

What has taken over in people's lives is perfection; the need to be number 1, number 2 just doesn't cut it. Take Jude Law's character Jerome for instance. He's genetically engineered to be perfect. When he comes in second in a swimming competition his world collapses, he's never failed, he's never contemplated failure and he's been brought up never to expect failure. In a society though where everyone is engineered to the best of the scientist's ability they cannot surely expect everyone to run the same time in a race, reach the same height in the high jump, or swim with the exact same strength. Obviously the characters in Gattaca do though and although engineered to be 'perfect' they are far from it. Society then has broken down into two discreet sections, the ones whose parents could afford to genetically engineer their child and those who couldn't. Those who have undergone the process are termed able, and those who have not dis-able; and this small play on words with the earlier mentioned de-generate sums up the society into which we are now looking.

The presented upper echelons of society seem barren of any feeling. The steady stream of workers entering Gattaca are much like the automatons shown in the very early Metropolis; never speaking, not acknowledging each other, faces devoid of any emotion at all. It's as though Niccol's telling us that if we're engineered to be almost perfect then we lose something in that process, the very aspect which makes us all human.

Cinematography is much the same, the deco environments again lacking any warmth or personal touch. Minimalism is the in thing in the Brave New World, even Jerome's apartment, nice though it is, seems more like a reception or waiting room than a place of abode.

Jude Law and Ethan Hawke, are perfect for their roles. Law shows a brooding, conceited man who towards the end mellows as he understands the actual worth of attaining your own goals as opposed to being presented them on a plate without any effort whatsoever. Hawke is determined to the point of exhaustion, reaching out for his life long goals only to suffer set backs and potential mishaps you can't help but feel for him battling against all the so called superior ables around him. Uma Thurman walks through with a steady almost mono performance but that's what's required of her own personality here. I enjoyed Xander Berkeley, as the doctor who knows what's going on but because of personal reasons doesn't let on, and of course Gore Vidal more renowned for his writing puts in an adequate enough performance as the director of Gattaca.

Gattaca is a superb look at the human spirit and a warning really not to dabble too much into the modification of your own or your offspring's genes. It's happening now as we speak with insurance companies looking into potential family medical problems and once this genie is out of the bottle control becomes all that much easier. A vision of a perfect future, which as most of our characters show, is far from it.